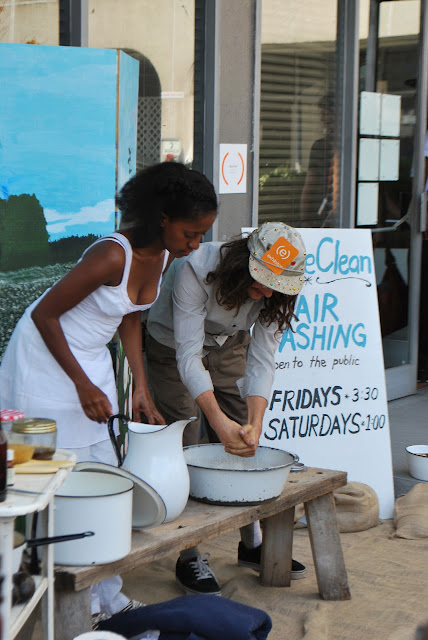 I had the pleasure of sneaking in a visit to the (e)merge art fair last Friday in between travels. I arrived just in time to hear a panel discussion about performance art, what it is and it’s place in and outside of the art institution. Afterwards, Holly Bass performed her newest piece, Come Clean.

I don’t know if you are familiar with Holly’ work. You probably are if you live in the Washington D.C. area as she very active in the art scene here as a performance artist and poet. She hosts weekly open mic nights at Busboys & Poets and recently performed in the Corcoran Gallery of Art’s Take it to the Bridge series this summer. You can read more about her work and her bio here.

In Come Clean, the stage was set with a rural backdrop, wooden bench, and a hand painted sign that read, “Come Clean, Open to All, Fridays 3:30, Saturdays 1:00.” Holistic ingredients, like eggs, avocado, honey, beer, and coconut milk were arranged in mason jars on the top of a three tier metal cart. Two young African American ladies dressed in all while and barefoot stood to the side. One carried a white antique basin and the other a large pitcher. 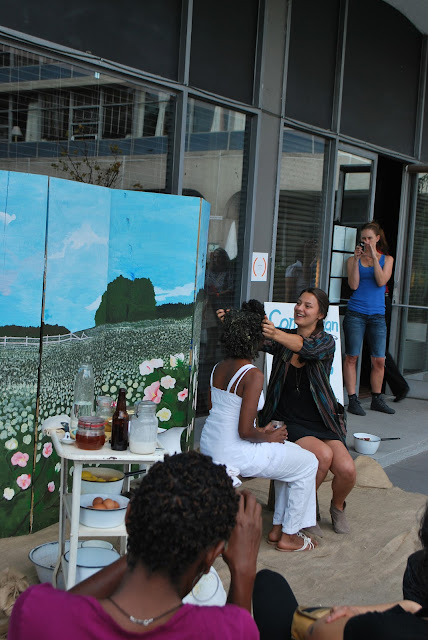 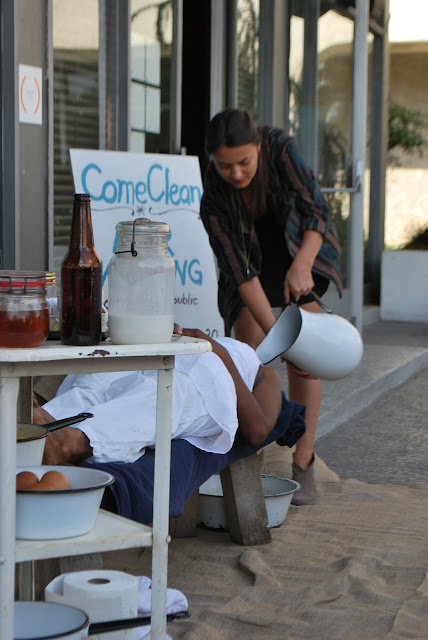 Holly also dressed in all white and to begin the performance personally greeted every single viewer, “Thank you for coming.” When we made eye contact I felt like she was my friend. Unlike a theatrical performance, she did not raise her voice but instead kept things at a very conversational tone. She asked three people, whom she just met, to help her with the performance. One would condition her hair, with the natural ingredients of their choosing, the second would rinse and shampoo it, and the last would oil and comb it.

The first person was a young man, a fellow artist exhibiting his work at (e)merge. After Holly washed both of their hands, she asked him to choose the ingredients to condition her dry hair and asked him to touch her hair to gauge its dryness. Once the conditioning elixir was made, she asked him to put it in her hair so that all her hair was covered. They both slowly unbraided her hair, not facing each other as she was sitting on the bench. She was very vulnerable sitting there letting a man she did not know touch her. Yet he was enthusiastic, gentle, and followed her instructions. He spent a great deal of time covering her hair with the mixture. They chatted about his work, where they were from, how their day was going, all the things one normally talks to their hairdresser about. It reminded me of all the times I went to the salon and made small talk. I felt relaxed in my chair as they became comfortable with each other. Once her hair was fully conditioned, they parted ways with a friendly hug.

The second person to assist Holly was a young woman, who looked very similar to me and about my age. Conversation between the women came easily. Holly asked her if she had ever worked with black hair before and she said no. I hadn’t either. I had no idea what went into grooming their locks. I was watching something I’d never seen before, yet it was something I am so familiar with. I love the conviviality of women sitting around together taking care of one another. Vanity can be a cruel weakness, but it can also build community. I was also very curious to continue to see what the differences between Holly’ hair and mine were during the shampooing and combing processes. I wanted to feel shameful about watching, in a way, the exotic, but there were no walls up between the women. The white girl shamelessly asked Holly about her hair, grooming habits, and history while Holly laid on the bench and she poured water over her hair. She touched holly without shame and playfully gave her a shampoo Mohawk and a scalp massage. Holly said it reminded her of all the times her mother did her hair when she was young. I agree, this was definitely a collective experience. Also all of the assistants treated the artist kindly; they gently touched her, respected her body, and chatted with familiarity.

While this was going on, the two barefoot assistants took the water back and forth to ensure that the performers always had a clean basin and fresh clean water. 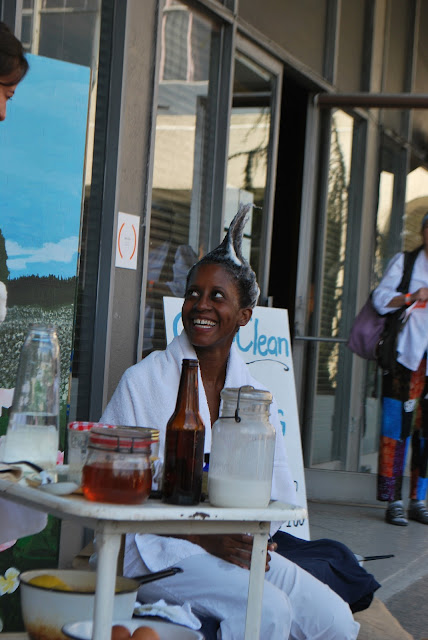 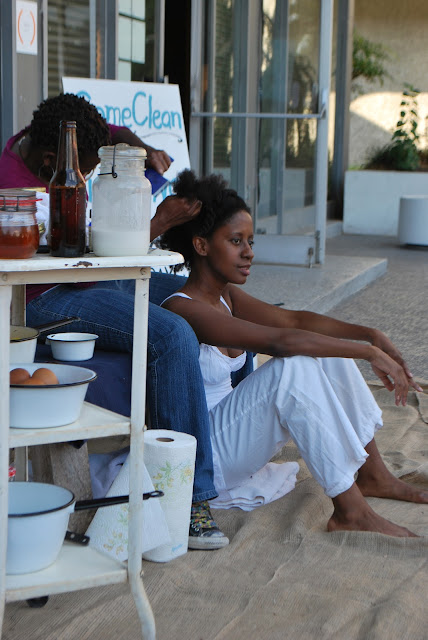 For the last part, Holly was nervous about asking a non-black person to comb her hair. She was worried that it would be too foreign to them. The assistant chose natural shea butter and coconut oil to apply to Holly’s roots and started the combing process. Section by section she put the oil at the roots and combed it up to the ends, then Holly twisted the hair to keep it separate from the other sections. By this point it had been almost a full hour. Many of the audience had come and gone and some of Holly’s friends sat loyally up front. They began to chat about hair myths, curses, and legends surrounded by the grooming rituals of their mothers and grandmothers. The things women go through for beauty! I finally had to leave. I don’t know what came over me, but at this point I felt so familiar with the artist that I said, “Holly I have to leave, but thank you so much.” And she waved goodbye.


I’m curious to know if her hair was actually more conditioned and if she felt cleaner. I’ve always wanted to know if beer and lemons really strip your hair or if coconut milk and honey really smooth the follicles. But when I left I forgot to ask. I was too busy thinking about how the vulnerability of letting someone touch you-not just in a sexual way but something as simple as washing and brushing your hair-builds trust and how that trust leads to secrets leaked (coming clean, perhaps?) and lives shared.
Posted by Jamie at 7:00 AM