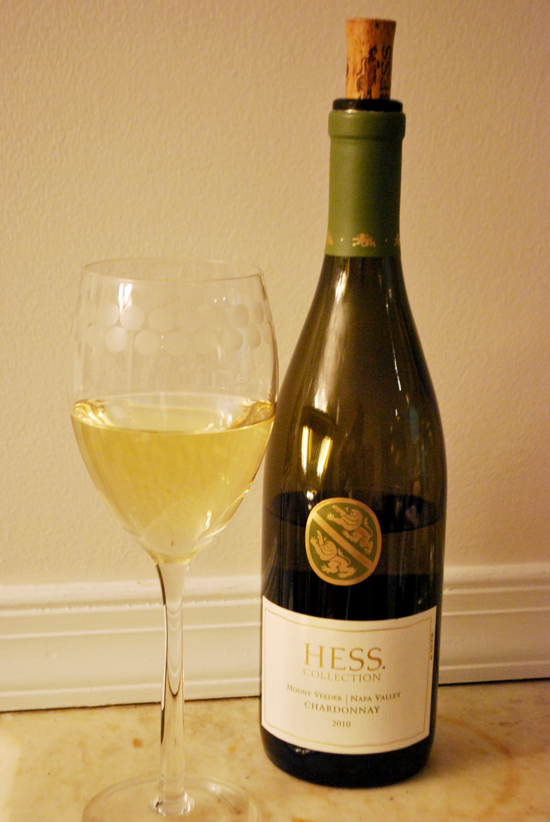 Hess Collection, Chardonnay, Mount Veeder, Napa Valley, 2010 $35
My rating for this bottle? I would drink the whole thing.

I first tried this chardonnay at the winery out in Napa Valley last July with my friend Katie. The experience was not at all what I expected after hearing what a sh*tshow the Napa scene had become. I was expecting huge tasting rooms with hoards of tourists fighting their way to the bar and demanding larger pours, drinking to get drunk. Instead, after a tour of the facilities and (fabulous) contemporary art collection on Hess Collection grounds, we had the pleasure of our first wine tasting in Napa in a quiet, almost private bar. Our guide, Ward, was knowledgeable and seemed to be having fun with Katie and I as we learned and tasted. I had my wine tasting notebook in hand and enjoyed a relaxing three days with my best friend. We had such a great experience that we signed up for their wine club (you can read more about the wine club here.)

My tasting notes from that day read, "Smooth, slightly salty, pear(?), slight minerality, honey sweetness, usual chardonnay buttery-ness almost undetectable. Ward recommends pairing with oysters." This was one of Katie's favorite from our first stop. I purchased a second bottle at the time. Gman and I opened it a few weeks ago. It was fun to take notes and compare then to the ones from last summer (without looking at the earlier notes). Here's what Gman and I thought about it: straw color, viscus, smells of lemon and honeysuckle, slight alcohol. Tastes honey, bright light mouthfeel, creamy and buttery - what a chardonnay should be. We drank it with salad for dinner.

How interesting that the buttery flavor came out when we opened the bottle 10 months later. Or maybe I'm a more careful taster now? I am curious to see how this wine would develop with more time. I should have bought more than one bottle! Do you notice if your favorite wine changes over time?
Posted by Jamie at 7:00 AM No comments: 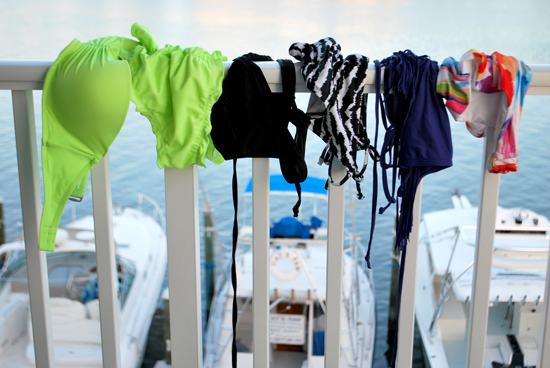 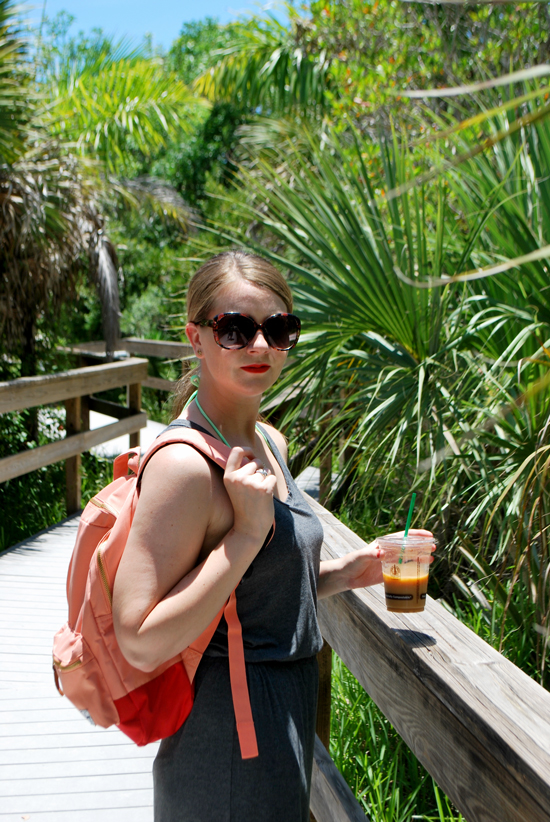 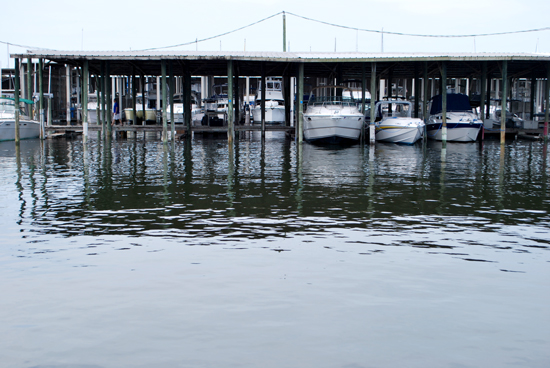 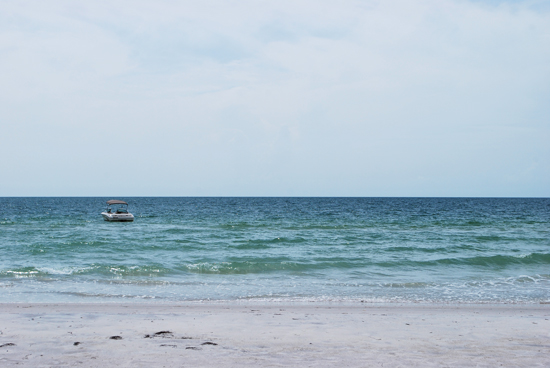 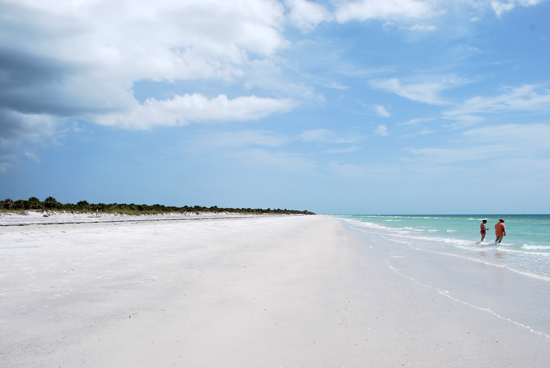 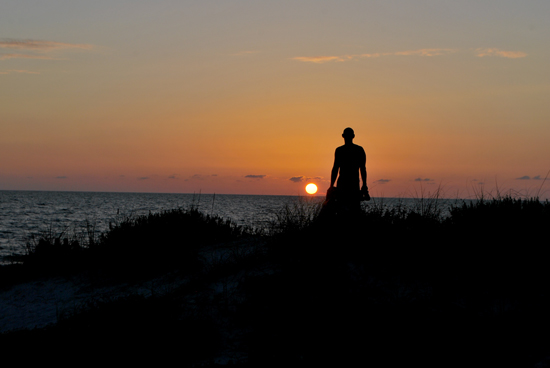 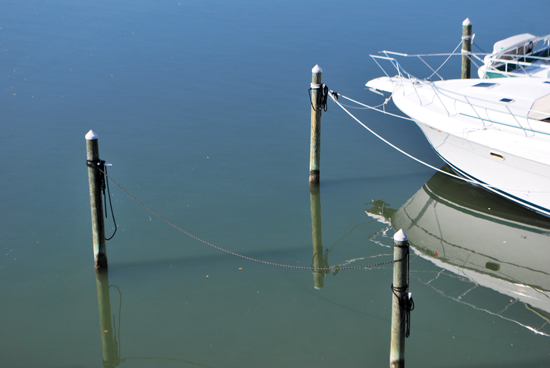 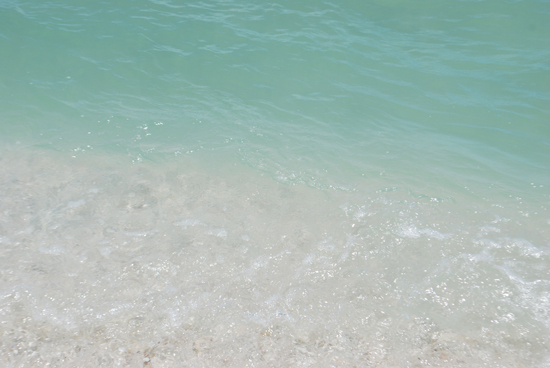 Just a few reasons I love being in Florida - Sanibel Island, Indian Rocks Beach, Clearwater Beach, and Caladesi Island all in two weeks! It's always so hard to leave. Thank you to all my loved ones who took the time out of their busy schedules to hang with Gman and me! I love you dearly.

I can't wait to share my Florida experiences with you soon. But first, I'm off to explore the American South. Have a great week!
Posted by Jamie at 7:00 AM 2 comments: 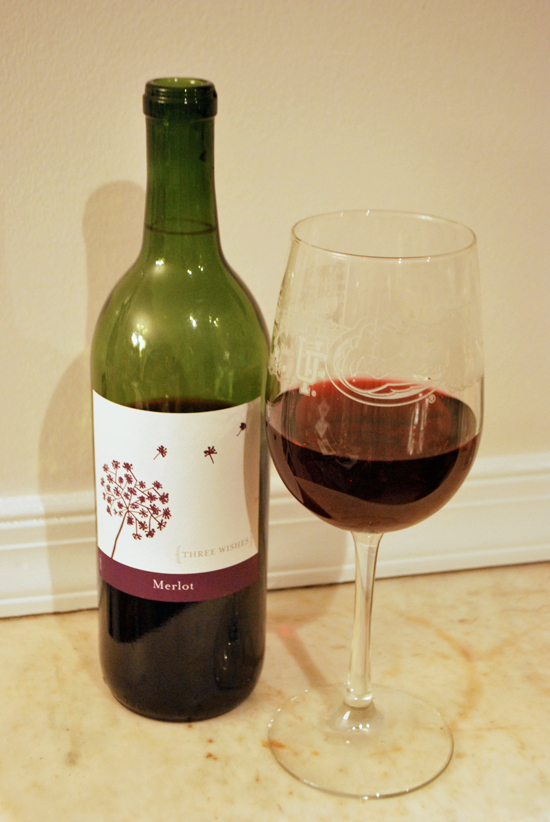 Three Wishes, Merlot, California, $2.99 (available at Whole Foods)
My rating for this bottle? I would drink a glass.

The first thing you should notice about this wine is that it's $2.99. Now if that isn't affordable luxury, then I don't know what is! The first "good" $3 wine I ever had was actually a 3EUR bottle of red wine in Paris in 2006. Little thought went into grabbing up a bottle for a sunset picnic by the Eiffel Tower and it was perfect for the occasion. If Paris had Whole Foods (which thank goodness it doesn't) (sorry I'm not sorry) (Also, this is probably the cheapest thing you can buy at Whole Foods) (anyways...) then Three Wishes would be a wine I would grab and bring to an Eiffel Tower picnic.

With a sort of sweet, sort of not sweet, one dimensional red wine flavor it is a good bottle to bring to or serve at a party. It appeals to the taste buds of non-wine drinkers and new red wine drinkers while also being decent enough for your oenephile friends to enjoy a glass or two. I don't really like sweet drinks, which is why I rated it as only drinking a glass. It's not my #1 favorite, but if at a party, I'm happy its in my glass. Three Wishes also has a Cabernet Sauvignon (the Merlot is better), and a Chardonnay (the best of the three).

Gman and I bought a case (which was the same price I usually pay for one bottle...) and keep it on hand to serve in "emergencies", to last minute guests, and to bring to our friend's houses as a host gift. It has never disappointed. After all, no one gets upset when you show up with a bottle of wine in hand.
Posted by Jamie at 4:33 PM 2 comments:

Wardrobe: What to Wear to See Tomahawk at the 9:30 Club 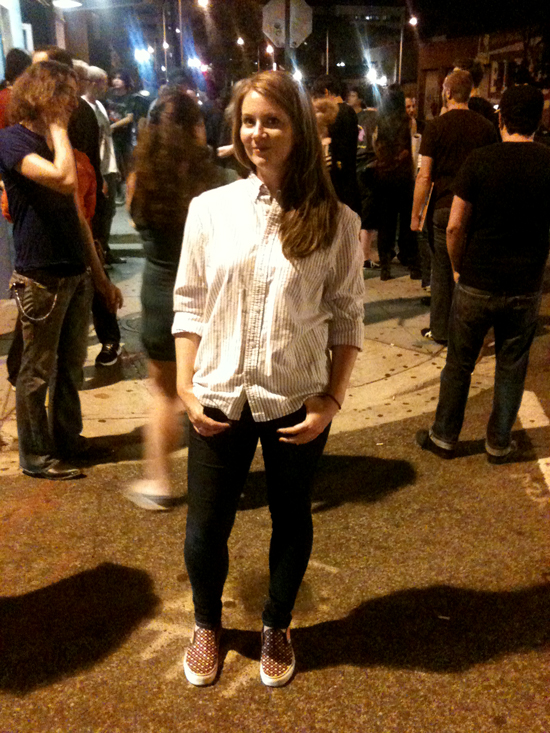 Gman and I have been pining to see a concert at the 9:30 Club since we moved to DC but due to laziness in checking the schedule, we hadn’t. So when we found out that one of Gman’s absolute favorite bands, Tomahawk, was playing there, we jumped at the chance to finally check it out. I really liked the venue. Pretty much any place you stood seemed like a good spot and it was rather intimate. I’m not sure that I have to say this, but obviously they didn’t have a wine list. I was very glad to see one of my favorite beers from our Dogfish Head exploration, Raison D’Etre, on tap - a little too timely, no?

Gman has a thing for Mike Patton. He’s the talented front man of Tomahawk and also lead other groups you might be familiar with: Faith No More and Mr. Bungle. I became well acquainted with his work through Gman. What I like about Mr. Patton is that he isn’t afraid to explore new sounds or ways of composing a song. Over the years he has developed as an artist without losing himself. For instance, his album Mundo Cane sounds lounge-y and is mostly in Italian. He sings Deep Deep Down with a live orchestra, too. I think Mr. Patton would get a kick out of John Cage’s 4’33” (hooray for art history!).

I wasn’t sure what exactly to wear, as choosing something for a rock concert was completely out of my usual ensemble selection purview. However, I do have two pairs of Vans and thought this the perfect occasion to put one of them to good use. I ended up wearing skinny jeans and one of Gman’s button-up shirts to try and channel his enthusiasm. I had a lot of fun at the show and it reminded me that I really like going to live shows and need to go more often. 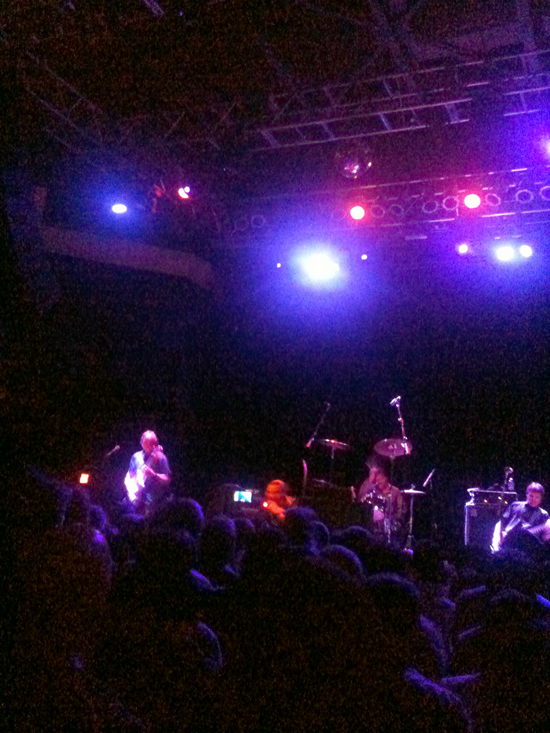 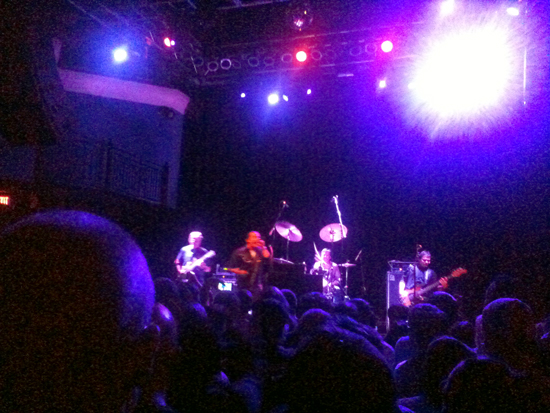 Here are a few observations from the evening, for your enjoyment:

As every song started Gman would say with a twinkle in his eye, “This is my favorite song!” with one exception later in the set when he shouted to me, “this one’s called Rape This Day.” I think this one might actually be his favorite.

The guy next to me was in the zone rockin’ out as if no one else was around. I assumed he was on something and I had fun trying to follow his rhythm vs the band’s.

Most people there were in their mid-thirties and the crowd was really relaxed, just listening to the music. The two men standing in front of us put earplugs in as the music started. They were about the dorkiest twosome I’ve seen and yet I could hear them making fun of everyone else there.

There were a lot of interesting tattoos and variations on the mullet hidden beneath ball caps. 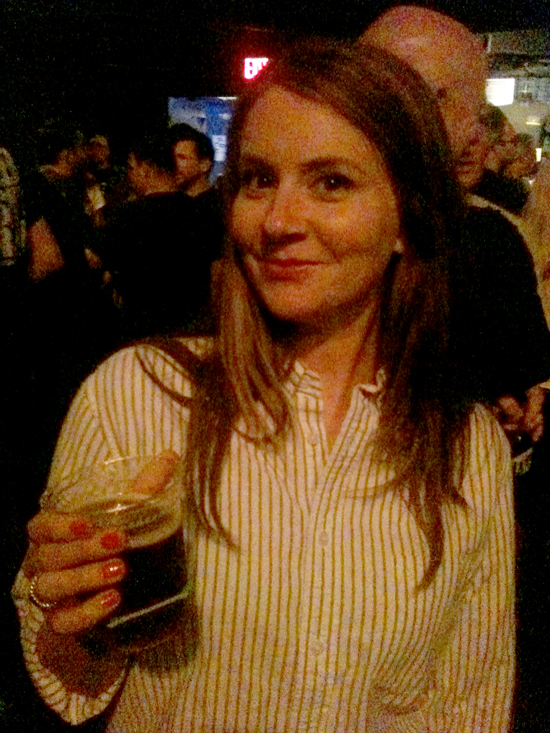 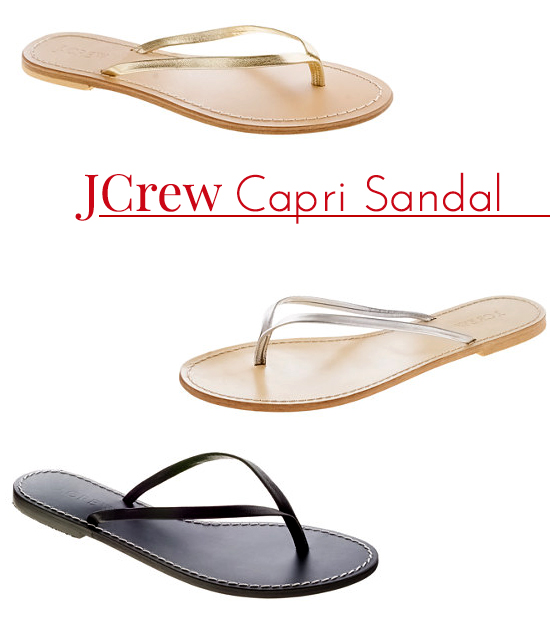 When I was living in NYC my aunts and mom came to visit me. While on the phone discussing our itinerary, I mentioned that we would probably go to one fancy dinner and maybe drinks afterwards. My aunt asked, "Should I bring my dressy flip-flops?" I couldn't stop laughing because at a nice restaurant in NYC you would never consider wearing sandals, let alone flip-flops! I told her she could borrow a pair of my heels. She couldn't see what was so funny, because down in South Florida not only is it perfectly acceptable to wear sandals almost anywhere (as a woman) but in fact most ladies have a pair of nicer flip-flops or sandals that they wear to dinner, parties, and even church.

As I packed for multiple week vacation in Florida, I thought about this story. Each thing in my suitcase will have to perform double duty for trips to the beach, dinner, shopping, walks in the park, playing tourist, and relaxing around the house. I used to work at JCrew (in Columbus Circle in NYC) and the leather Capri sandal used to fly out the door this time of year. I think its because this sandal is the perfect marriage of something you can throw on with a sundress or shorts for non beach related summer activities but they aren't so precious that you would be afraid to get them wet and sandy at the beach. They also lay completely flat in my suitcase, freeing up space for more heels, I mean running shoes...

Do you have a favorite sandal that performs double duty when you travel? 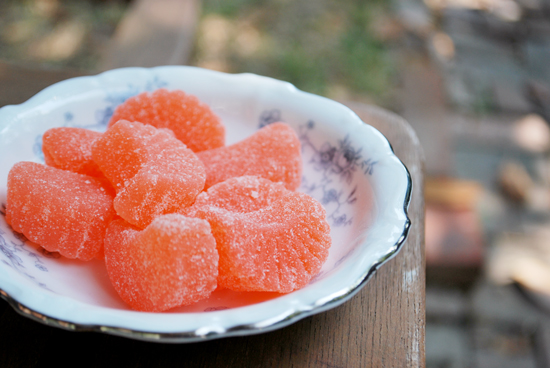 When I was a little girl my sister and I used to go over to my grandparents' house. We would go over there often, for entire weekends, and on weekdays after school. No matter how frequent our visits, we always had special little things we did. For instance, we played dress up in my grandmother's silk night gowns and made up dance routines to Disney soundtracks (Beauty and the Beast being a favorite) and Barry Manilow tapes (no snickering, he's awesome). One special treat always sticks out in my mind when I think about those days.

When you walked in the front door of their house the formal living room was to the left. We weren't really allowed to play in there as it was for adult company. The room wrapped around to the formal dining room and then connected to the kitchen, where you would walk if you went straight instead of to the left when you walked in the door. We could run around the entire house in a loop. On the coffee table in the formal living room there was a large glass lidded candy dish. My grandfather was a sucker for orange slice candies and always had the bowl filled with them. For a long time he was the only person I knew who actually ate them (much like finding the person who really likes Peeps or candy message hearts you get on Valentine's Day). I used to run through the room and sneak a slice or two while we were there. I never took too many because I didn't want him to know I was sneaking one of his special candies!

Many years later my grandfather has passed away, the house has been sold, and the candy dish sent to a consignment shop. Sometimes when I'm feeling lonely or I miss him, I'll swing by a drug store and buy a bag of orange slices. I eat them quietly and linger over the crunch of the sugar crystals between my teeth. The gummy texture and artificial orange flavor take back 20 years. While I'm eating them I think about my grandfather and all of our wonderful memories together.

Do you have any foods that bring your back to your childhood? Any that help you remember your loved ones?
Posted by Jamie at 7:00 AM 2 comments: