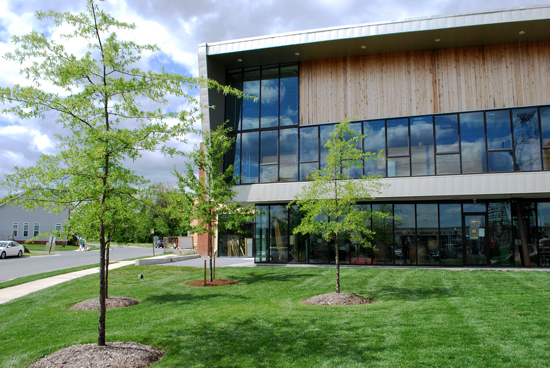 Fermenting barley greeted our nostrils before we rounded the corner and saw the facilities of the Dogfish Head brewery. We happened to arrive just as new wart was being extracted after fermentation and dumped into a dump truck just outside the entrance to the tasting room. Later we would learn that the mash was going to local farmers as feed for their cows and that cows become greedy, excitable animals upon tasting the delicious mash and their mouths have been rumored to water as soon as they see the truck pull up. Their flesh, in turn, feeds hungry travelers at the Dogfish Head Brewpub on Rehoboth Beach. Making for one of many lovely sustainable little life and business cycles in greater area of Milton, Delaware provided by the brewery.

Dogfish Head is a craft beer brewery, founded in 1995 by Sam Calagione an English major who jumped the train headed to teacher land for a love of brewing. His knack for play on words and puns abound. For example, the machine used to continually add hops to their IPAs (a signature technique) is called Sir Hops A Lot. Being categorized as a craft brewery means Dogfish Head has a small production, less than six million barrels per year, it is owned by people, usually the beer maker, vs large companies like Anheuser-Busch. Because the people who live in the community make the beers locally, craft breweries tend to use sustainable growing methods and include lots of community outreach and programing. They also look at the past to revive flavorful historical brews and enjoy the challenge of improving on them. 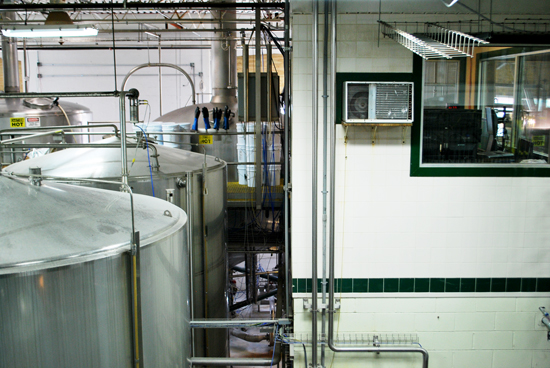 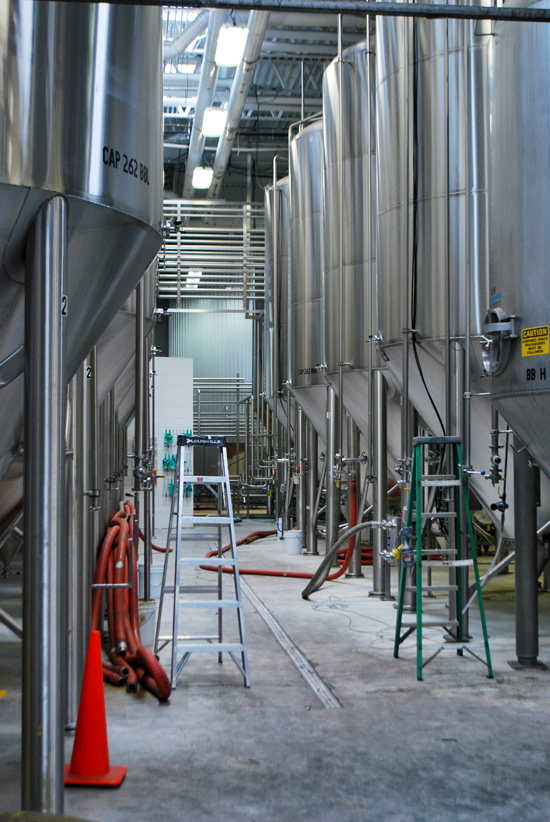 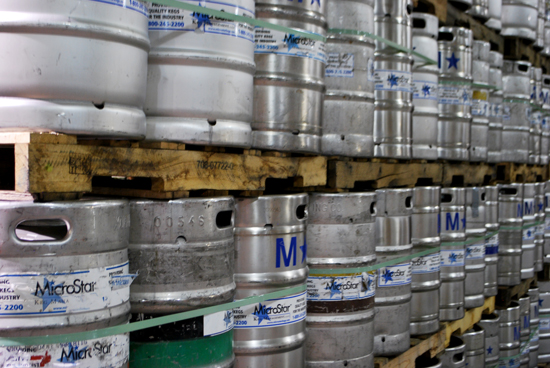 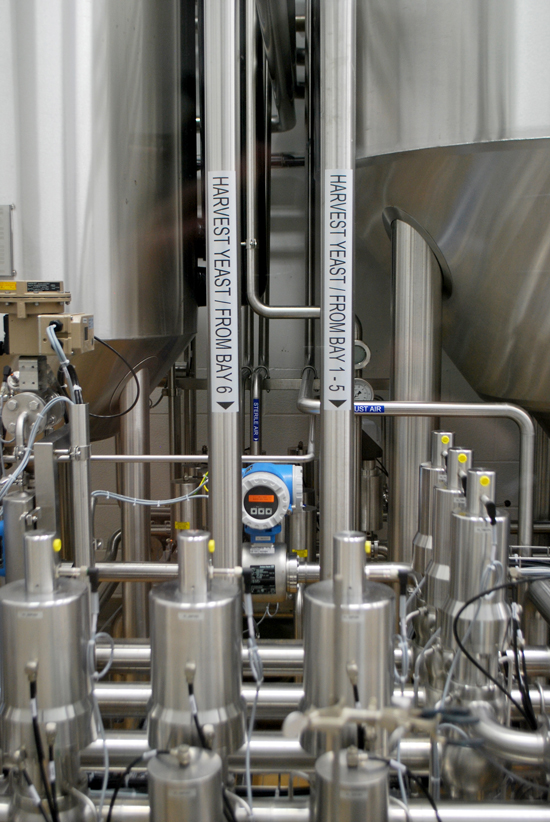 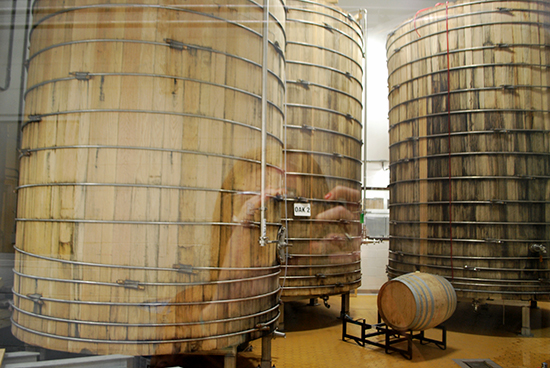 The motto at Dogfish Head is “off-centered brews for off-centered people”. They are brewing beers for the sake of brewing beers, which don’t always appeal to mainstream tastes. Being a smaller production company, when we went on a tour of the beer making process, it was actually in the same facilities they make the beer in, along with actual brew masters deep in thought. I mention this because I’ve been on several brewery, winery, and distillery tours where the tour takes you through a simulated brewing process set up like a museum. All have been incredibly informative but it was neat to be so intimately exposed to the beer makers, facilities, and ingredients at Dogfish Head. It made me feel connected to what I tasted later.

The architecture of the interior reflected the cedar and metal of the exterior giving one the impression you were standing inside of a beer tank. It had a home-y, industrial feel if that makes any sense. The smell of cedar, kegs, old beer, new beer, raw barley, yeast, and fresh water filled every space inside. Bright sunshine poured through the floor to ceiling glass walls of the tasting room and on to the faces of beer nerds of all ages and origins - over 10 different license plates spotted in the parking lot.

After the tour we tasted four beers. The descriptions of each beer were similar to the language I’m used to seeing on wine descriptions like, “notes of lemongrass, orange peel, or coffee”. Just like a sommelier, the notes listed food-pairing recommendations and even a wine they felt the beer compared to in terms of mouth feel, weight, and sometimes flavor. Very useful indeed. 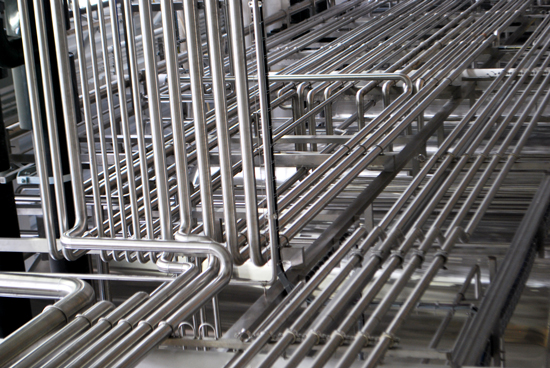 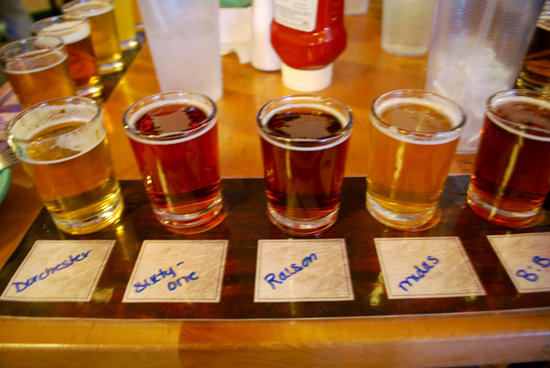 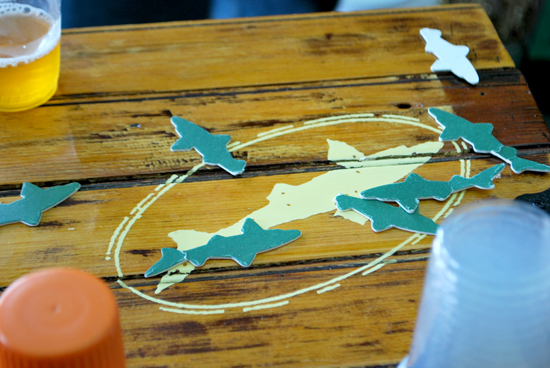 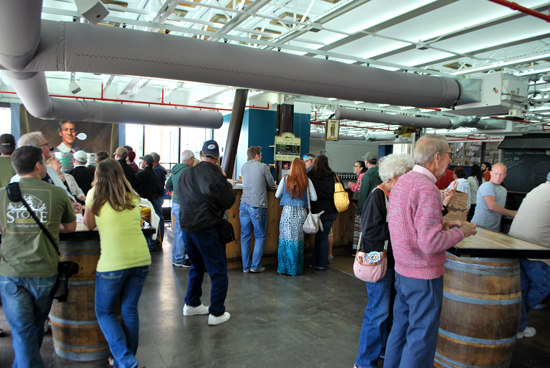 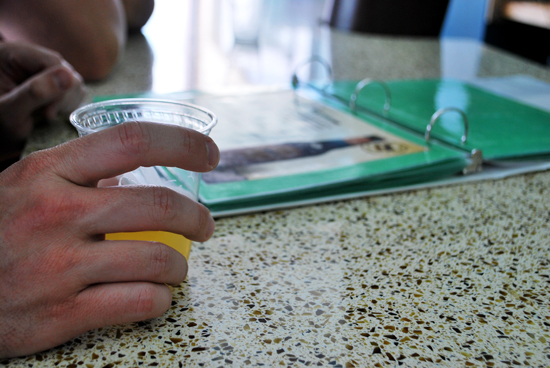 When I’m not in the mood for a glass of wine (gasp) or I need a little carbonation, my favorite thing to do is to go to a beer place and order a sampler. I tend to be indecisive when ordering beer because there are so many great, small production regional varieties. Its hard for me to commit to a whole pint when I want to try everything. Usually with a sampler I can try 4 or 5 beers at once (hooray!). During our visit to Dogfish Head and later at their brewpub in Rehoboth Beach, I had the opportunity to sample over 10 of their beers (and was somehow still standing). Here are some of my favorites from the day with wine comparisons.

Namaste was the first brew we tried upon arriving for our tour. It is a Belgian-style white beer that was compared to a Gerwurztraminer from Alsace - meaning bright, crisp, with floral notes, and refreshing on a hot summer’s day. Namaste was made with dried orange slices (not just the rind), lemongrass and coriander so it had less floral notes than its listed wine comparison and made me think of a Sauvignon Blanc. It was perfectly light and a great place to start our beer tasting journey.

Chateau Jiahu shows off what Dogfish Head is all about. The story behind this one is that they worked with molecular archaeologist Dr. Patrick McGovern to recreate an ancient Chinese recipe for beer. This recipe dates back to 9,000 years ago from the village of Jiahu in China. The flavor was highly distinctive and definitely not for everyone. Muscat grape juice (a type of wine grape) is added to the barley malt along with orange blossom honey and fruit then fermented for a month with sake yeast. (Dogfish Head uses many different strands of yeast for their selection of beers.) It basically tastes like a Muscat wine (very sweet) mixed with a citrus-y beer. Another interesting historical beer we tried was Midas Touch.

As noted above in the Chateau Jiahu, Dogfish Head experiments with adding wine grapes to their beers. The most successful, in my opinion, is Sixty-One. It is basically their famous 60-minute IPA with a touch of Syrah grapes thrown in. It was my sixth tasting of the day and I remember feeling pleasantly surprised by its balanced flavor and rounded mouth feel. The touch of Syrah took the bitterness out of the IPA.

My over all favorite was the Raison D’Etre, which unlike some of the others were tried is available year-round and at most of their retailers – good news for me! It boils down to Belgian brown ale plus raisons added to the fermentation process. This is comparable to Bordeaux red wine and pairs perfectly with a steak dinner, which was the point of its creation. It tastes kind of fancy but not overly messed with.

Perhaps with all this new knowledge, next time Gman takes me to a pub I’ll be able to make a more decisive choice when selecting a pint. In the meantime, I leave you with this. 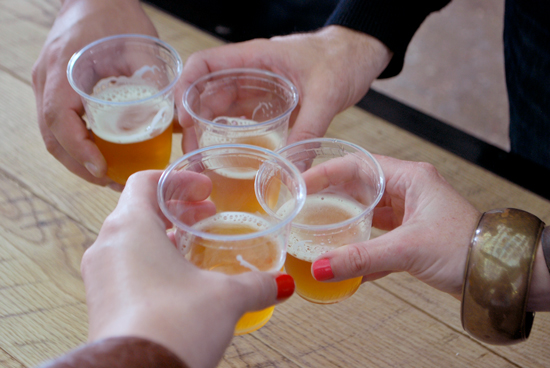 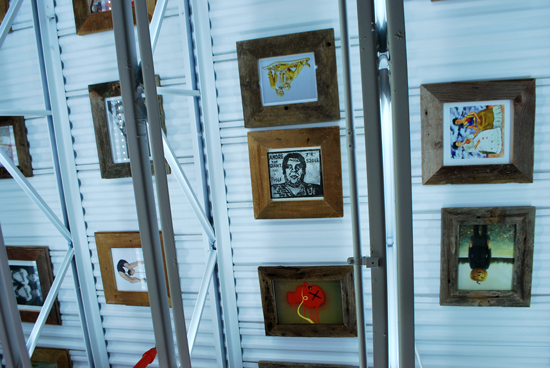 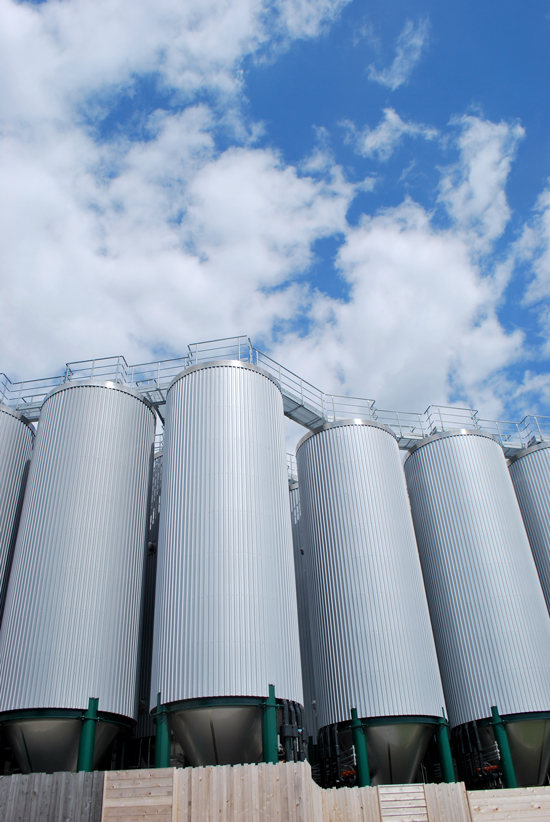