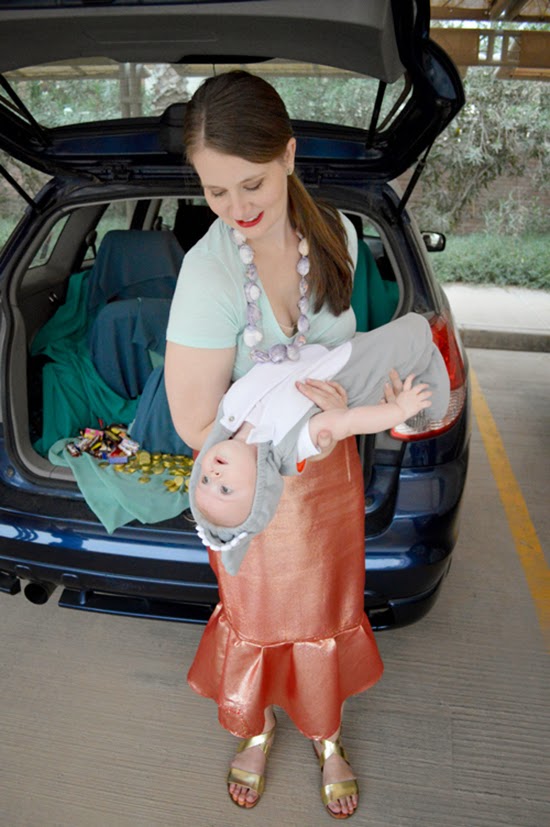 This year was Noah’s first Halloween and I really wanted to get into it. I found the cutest shark costume for him online and decided make it a family theme costume – something I vowed never to do but was suddenly excited about. Instead of three sharks I thought it would be fun to do a shark, mermaid, and pirate. This is my mermaid costume DIY journey. Nothing ever goes as smoothly as it seems like it should on Pinterest.

I’ll start by saying my most favorite costume that I ever wore growing up was the mermaid costume I donned in kindergarten. I only remember a few things from that year; making donuts in class, pretending to sleep during naptime, and my mermaid costume. It was modeled after The Little Mermaid, as most mermaid costumes are. My mother sewed it for me. It was a dress; the top, a nude tank top with purple sparkling shells sewn on, and a shiny green skirt with fins on the bottom. The fins stuck out to the sides and would have been pretty convincing if not for my feet peeking out. On my feet I wore my favorite purple peep-toe jellies, which I wore everyday and still think of.

As a 30 year old adult with a small infant to take care of, I didn’t think I’d have time for a full on sewing project. Especially since I’d never sewn on a sewing machine and didn’t own one (you’ve seen my Instagram and know where this is going). I started by scouring the internet for inspiration and a no sew tutorial. There was quite a variety of costumes based on mermaids, from hipster Ariel to sexy mermaid (just Google search "mermaid costume" under images. Kim K was a hot mess as a mermaid and this one girl totally nailed Ariel including the dinglehopper). I found a tutorial on Martha Stewart online by Christian Siriano, a fashion designer and former Project Runway winner (in case you didn’t know). Throughout the tutorial he used encouraging words and phrases like, “simply” “your local craft store” “easily” “just like that” and “hot glue”. This was it! I made a shopping list based on this simple and easy no sew project as promised to me by Martha and Christian. 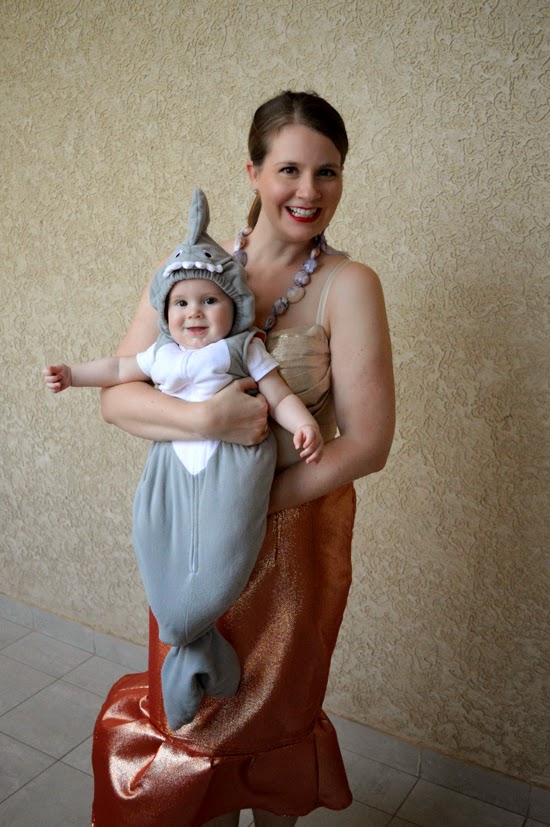 My local craft store. Funny I never considered whether or not there was a craft store in Kuwait City. There isn’t. We have a fabric souk, stationary supply store, and True Value. The fabric souk seemed the most promising of the three and I enlisted the help of an expert sewer and crafty friend who knows the souk well. It took several visits, but eventually I got some fabric. It was not what Mr. Siriano recommended. They didn’t have organza or stretchy teal fabric anywhere at the souk. I did find one that was made of gold tinsel and red thread, which looked like salmon scales and got totally side tracked. I ended up buying this thinking I’d hot glue it together to make a skirt (wrong). I also bought chiffon thinking it was see-through like organza. this was also a fail, too heavy and not enough body for fins. Tulle would have been a better substitute in case you are thinking of going in the same direction.

Things got more complicated. Having no craft store to simply buy shells from I had to order something online. There wasn’t much and it was hard to determine what exactly I was getting in a 5 pound bag of seashells for $20 on Amazon. In addition, I realized that with a frequently nursing baby who needs to be held at all times, shells on my chest might not be the right choice. Thwarted again. This is where my kindergarten costume became the inspiration. And I bought a sewing machine.

For a first sewing project usually people go with a pillow or a set of napkins. Me on the other hand, I like a challenge, especially when I’m sleep deprived. What started as something I could just hot glue turned into a full on sewing venture. A friend of mine recommended taking classes on Craftsy.com to start my journey. I decided to make a pencil skirt with my fabric and let the costume go from there.

I ventured back to the fabric souk to collection notions with a new project checklist. Once my sewing machine arrived, I panicked upon reading the instructions. Well, trying to read the instructions. Noah was bouncing in my lap, trying to grab and eat them. It all seemed too much. I let the machine sit on the counter for several days before diving in.

Then after taking my measurements, I nearly fainted and it took several more days for me to get the courage to continue. “Don’t let the numbers upset you,” the Craftsy instructor said. How could they not?!

During this time my mother came to town for a visit. As an expert sewer herself she offered to watch Noah for me and encouraged me to continue my efforts despite having to make our own pattern when we realized the one that came with the class was too small (I just about laid on the floor and cried). 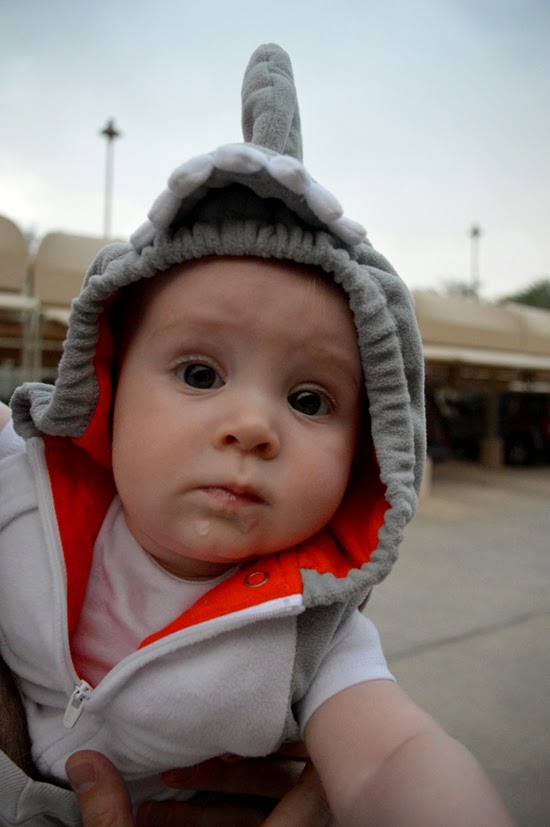 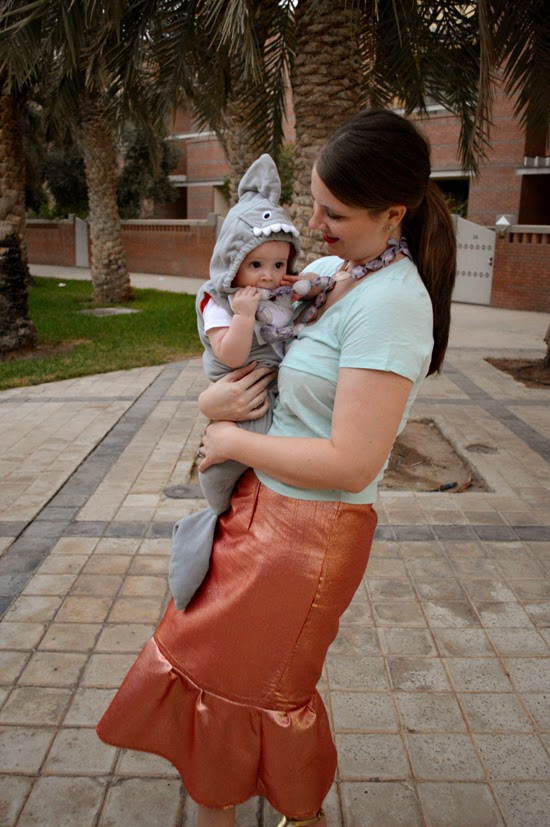 Keeping in mind the original Christian Siriano tutorial, I bought the recommended shape wear top to hot glue the shells on (before deciding to go in another direction). Besides not having shells to glue onto it, they don’t make those suckers in DDD. My breasts were spilling out. This is not as sexy as you are imagining - my nursing pads were spilling out too. Luckily my mom remembered how she made the shells on my costume 25 years ago and we improvised the rest of the outfit from there.

In theory, sewing isn’t really complicated. Once I got into it, I understood what I was doing and actually enjoyed using the machine. However, sewing tinsel proved rather challenging. So did removing erroneous seams when I did such a good job matching the thread color to the one in the skirt. My thoughts went from “I’m amazing! Once I finish this project, I’ll design my whole wardrobe and I will look fantastic and stylish!” to “WTF is going on? WHY why did I choose to sew TINSEL for my first sewing project? If the needle pulls the fabric one more time I’m going to light this on fire and take a nap.”

A lot of discussion, heartache, and sewing trial and error brought us to a pencil skirt with a short peplum and a nude body shaper with ruched fabric sewn as shells. This was not at all what the original was supposed to be. Nor did it scream mermaid (looking at the pictures now, I think it did but not at the time). No matter how I styled it, I looked like a 1950s housewife going to a Halloween party. I looked like my grandmother going to a Halloween party. My figure, already considered “womanly” now post-baby is overwhelmingly so. It is not the slight boyish figure of the girls modeling their mermaid costumes on Pinterest. I tried to embrace it, after all you’ve to go work with what you have, but in the end left the house wearing a blue t-shirt with my fishtail skirt.

Even so, my costume miraculously proved successful. When we finally arrived at the family Halloween Party, everyone got the picture that I was a mermaid accompanying my little shark - who stole the show anyways! I even got several compliments on the skirt. Although nothing went as smoothly as promised, it was definitely a learning experience and I am grateful for it. I won’t burn the skirt after all.

Have you ever tried a DIY project after seeing a tutorial online? How did it go? 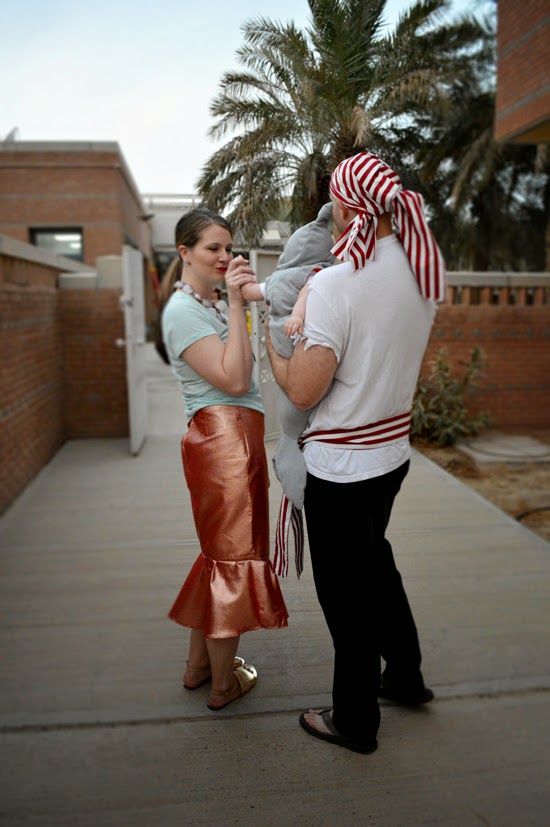