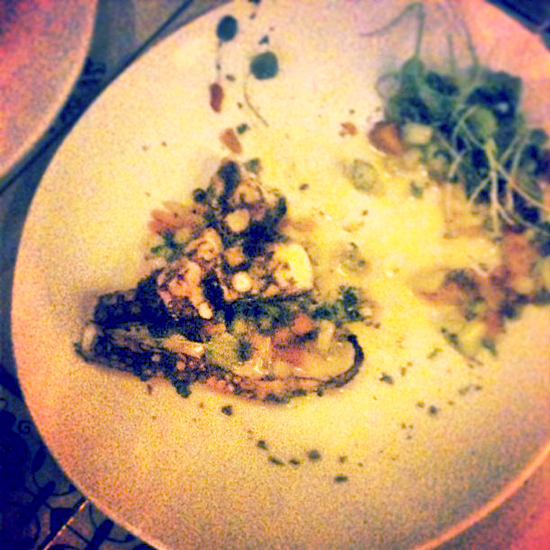 It was a chilly spring evening in March. The kind we anticipate wearing lighter sweaters and no tights but instead throw on wool coats and closed toed heels. Tammy and I arrived at Brasserie Beck five minutes late. Unusual for us as we always arrive right on time, the first ones to every party. The hostess directed us to our group, most of whom where already waiting at the table. The lovely ladies of Gilt City were hosting us and six other bloggers for a night of fine dinning and a little getting-to-know-you conversation. We all warmly greeted each other, I was so happy to see such familiar faces and looking forward to what the evening held. As we chatted one server took my coat and helped me with my chair, and another offered me a glass of Sauvignon Blanc to start our dinner. I like to start a multi-course meal with this varietal as it usually appeals to many taste buds and goes nicely just about anything usually served to first. It pairs particularly well with cured meat and cheese (including bleu cheeses) and oysters, which is what we were generously served to begin our communal meal.

I realized mid first course that we were in a Belgian restaurant specializing in seafood. I hoped my fear wasn’t detectable on my face. Since I was in the womb I have not had a taste for any creature from the ocean. And by that I mean - if I smell fish I get nauseated and I certainly don’t eat it.

The story starts when my mother was pregnant with me. She is a seafood lover. She loves sushi, grilled grouper sandwiches, scallops in pasta, steamed mussels in butter sauce, raw oysters, and most of all, crab cakes. An ideal meal for her would be a 4 oz. piece of grilled fish with a huge pile of grilled veggies to accompany it. She would eat this meal outdoors in the fresh air with perhaps a glass of chardonnay in hand. It would be near sunset and the landscape would have a golden hue. As if being ripped out of fantasyland and much to her surprise, when she was pregnant with me, she was sick at the mere suggestion of eating seafood. Lucky for her, she was back to normal after I was born. Now, it is common knowledge in my family that I will throw up in a fish market and I cried once when I saw a live lobster thrown into a boiling pot of water.

When I was a little girl, my parents tried to get my sister and I to eat fish sticks. My sister gladly ate them while I could barely gag them down – even though they were fried with delicious breadcrumbs and slathered in ketchup. I went through a phase when I was between 6 and 8 when I would eat Blue Crab legs if we were in a restaurant where they only served seafood. The taste of the ocean lingers in the air in those types of places and overpowers all other flavors. Even the burgers taste like fish. My eating the crab legs was a relief for my parents because my sensitive palate could be accommodated. Then suddenly one day, I hated Blue Crab legs and I haven’t had them in twenty years.

At the age of 16 my family took a trip to the Grand Canyon. We flew out to dude ranch then spent three days rafting down the Colorado River and camping on the banks of the canyon, an incredible experience. There were four college-aged kids in charge of 40 people on our expedition. They cooked everyone three meals a day and set up camp every night. We all slept on cots in the open air and went to the bathroom in a metal bucket that was somehow private while always having the most magnificent views of the canyon. For lunch every day we got tuna salad sandwiches. It was the only choice and if you didn’t eat it you would be mighty hungry when dinner rolled around five hours later. So I ate it. And it was fine. I didn’t gag or whine or embarrass myself. And I thought, maybe my palate changed with adolescence and I like seafood now? Unfortunately, it must have been a time and place type of situation because when I tried to recreate the sandwich at home, I was so disgusted that I ended up giving it to my sister.

As I consider myself a lover of food, I don’t like being limited by my taste buds. I want to be able to participate in life and all of its abundance. At least once a year I try to have something I’ve never eaten before. This usually happens easily when I’m put in similar situations like I was in the Grand Canyon. I’ll be on vacation in an unfamiliar place and sometimes have to order food in an unfamiliar language. There have been times when I’m not even sure what I ate but I was glad to have a warm meal.

At Brasserie Beck I got away with not eating the oysters. It seemed like everyone around me really enjoyed them but I was afraid to. I ate my weight in cured meats and cheese to compensate. My glass was refilled with Sauvignon Blanc at least twice by the end of the first course and the conversations were flowing like a glacial stream on a hot spring day. I wanted everyone at the table to be my best friend and for the night to never end. Several waiters cleared the table and presented the second course. The head chef, Robert Wiedmaier, paid us a visit at this time. He asked how everything was and encouraged us to enjoy this next course. I looked down at the table to find long charred octopus tentacles staring back at me.

I noticed Tammy watching me from across the table. We locked eyes as my new friends gobbled up the sea creature. I could no longer get away with quietly not eating. She outed me by shouting, “Jamie, are you ok with this?” All attention was turned to me. I felt my cheeks blush as someone said, “do you not like seafood?” I didn’t know what to say.

It is universally considered rude to not eat food that is served to you by your host. If you are visiting friends and they spend the day cooking for you, it is insulting to say, “oh sorry, I don’t eat that.” You don’t turn your nose up at someone’s generosity and hospitality. The same rules apply if someone hosts you at a restaurant instead of their home. The last thing I wanted to do was offend the kindness these women were showing us. So finally I said, “I don’t usually have a taste of seafood. But I’ll give this a try.” Then as the words left my mouth, I received an influx of encouragement from everyone at the table, “the texture is like a tender grilled meat” “try it with the salsa on top, it’s a nice combo” “just take a little bite” “let us know what you think.” I was terrified and shaking as I took a piece off of the platter. I smiled and did my best to divert the conversation back to someone else.

The words around me faded to white noise. All I could see was my plate in front of me. I cut into the tentacle. It was tender, a white meat, slightly flakey and softer than a scallop. The salsa was fresh and bright, a combination of cucumbers, roasted peppers, and shaved red onions dressed in oregano and caper vinaigrette. I balanced a quarter-sized amount of meat onto my fork and with as much salsa that would stay on. Then put it in my mouth. It was good. Great actually. It didn’t have an “of the sea” flavor at all. In fact, it was fresh and new and interesting. The combo of the wine, salsa, and octopus made me want to sit on a sun drenched porch somewhere on a beach with white sand and crystal clear water. It made me feel like suddenly winter wasn’t clinging to the air outside. I ate the rest of the portion on my plate and went for more. I surprised my companions and myself. They applauded my efforts discretely as we all commented on how lovely the meal had been thus far.

I couldn’t help but smile. I was so proud of myself. The table was cleared again and the salad course served, arugula with one large prawn. As I looked at the prawn, a wave of excitement came over me. I thought about an episode of Anthony Bourdain, No Reservations where he and his travel companion were eating prawns. They stared by sucking the brains out, and then devoured the bodies. I shivered, then cut the body from the head with my knife and ate it in small pieces with the salad. I left the head alone, baby steps. I felt like a champion. I felt like I climbed a mountain, and a steep one at that. Adrenalin pumped through my veins.

It was now time for the main course and our wine was switched to red. A Pinot Noir to accompany the Thursday night special: roasted Moulard duck breast with brandied sweet potato puree, fricassee of winter vegetables, kumquat marmalade and Madeira jus. By the time dessert and dessert wine came, I was in a state of pure bliss. My taste buds and stomach were sufficiently challenged, then rewarded. Conversations lingered past the table being cleared and check paid. We were making plans to see each other again, to reunite over happy hour or the next blogger event, and vowed to run a 5K together. We put our coats on and dispersed in cabs back to our homes, still squeezing in one last bit of gossip as we parted ways.

That night I realized something. For those of us who have a curious soul and traveling mind, we don’t always have to go far from home to experience the rush of encountering the unknown. Sometimes, all we have to do is choose something different on the menu.
Posted by Jamie at 7:00 AM