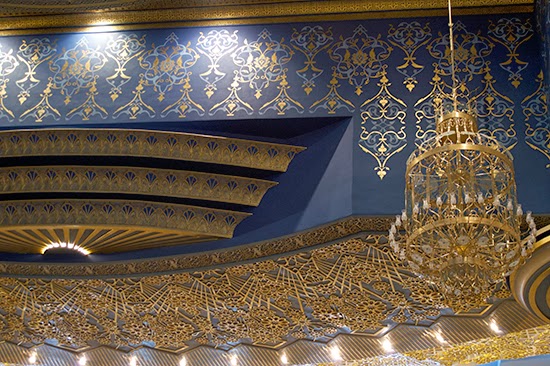 Until moving to Kuwait, I’d never been inside a mosque. I’ve only ever been to or toured Christian churches. With the Grand Mosque open for Westerns to explore, I was excited to see the similarities and differences between the worship spaces.

As with any place of worship, the architecture is seeped in historical significance. The Grand Mosque of Kuwait is designed with tradition in mind and takes heavily from the Persian style. Things like arcades of pillars forming breezy outdoor passageways, a central large dome, and pointed arches. The outside is humble and not at all assuming. One doesn’t expect the grandeur one is about to encounter on the inside.

Upon entering, you are struck by the grandness of saturated blues and gold leaf. Infinite geometric Andalusian style patterned tile work enlivens the space and hand-carved gypsum adds texture while decorative calligraphy draws your eye around the room. If you have a similar background as me, touring mostly cathedral style churches, you will notice a few differences. 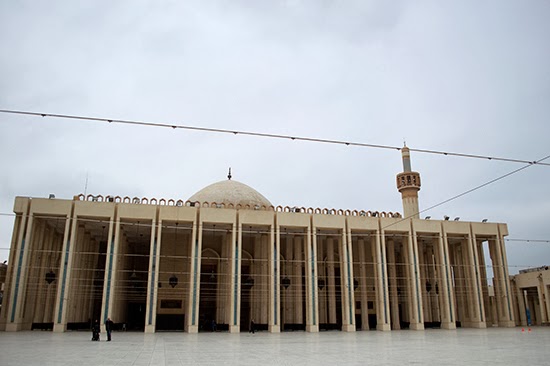 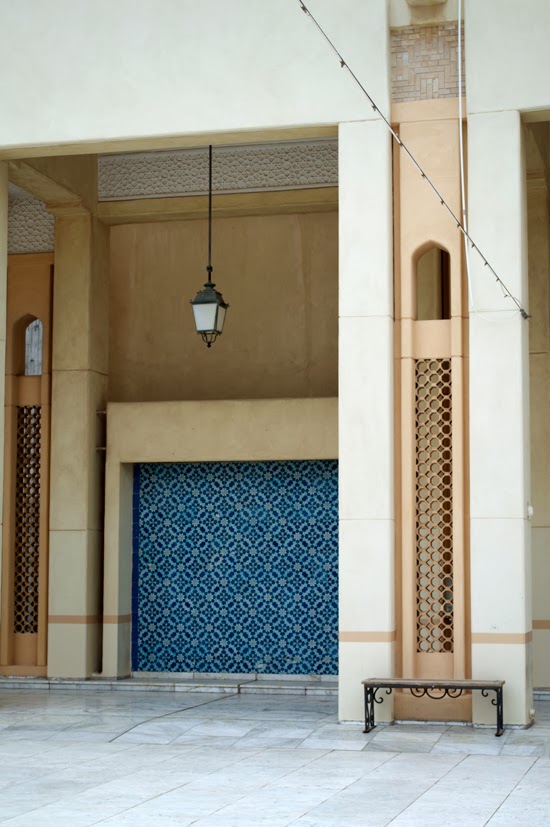 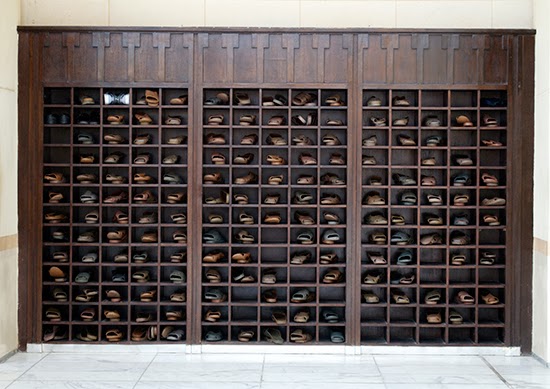 First, the room is square with a large central dome and there are no pews. Worship always faces towards Mecca and the square design allows the building to be oriented as such. Praying is not only an emotional act in the Islamic faith, one also physically worships by praying out loud and bending down to bow at various points during the prayer. Here, the carpet indicates a space where worshipers may position themselves. Interestingly, our guide mentioned that this is a reason men and women pray separately. As worshipers come into the space to pray they begin in the front row and as it fills in then go to the next and so on. He said most women would prefer not to bend down numerous times in front of men. I can see how that would be distracting for both sexes.

Secondly, you will notice that the decorative elements in the space don’t include images of people, animals, plants, Mohammed, or Allah. This is because it is believed that attempting to represent God’s creations in art can never truly be as good as the real thing and it is sac-religious to try and depict what God might look like. How could we even comprehend such an image? However, this lack of scenic artwork isn’t lacking in visual interest. Star designs are preferred as they can be infinitely drawn out into as many different patterns as the artist would like. At the Grand Mosque, most of the mosaics are created in the Andalusian style. You might recognize this if you have ever been to the Moorish parts of Spain.

The most important design element in the mosque is the calligraphy. Great pride is taken in selecting the artists, fonts (some fonts are reserved for religious or royal purposes), and words. For instance, at the top of the dome it is common for the 99 Names of Allah (from the Qur’an) to be written out in a decorative manner. At the Grand Mosque you can see the words blending into geometric patterns as they circle around the dome. These were designed and written by Hamid Haddad who is one of the most important calligraphers in the region and whom I believe is now in his 90s. Everywhere I go here, I am captivated by the calligraphy. 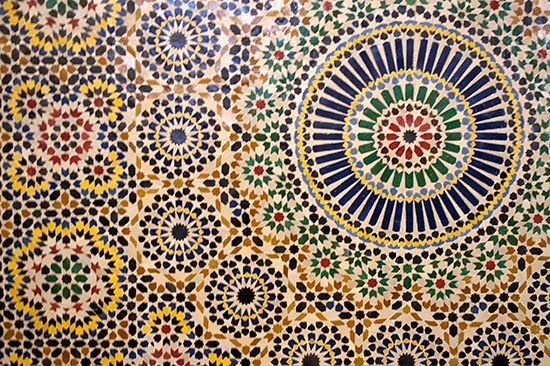 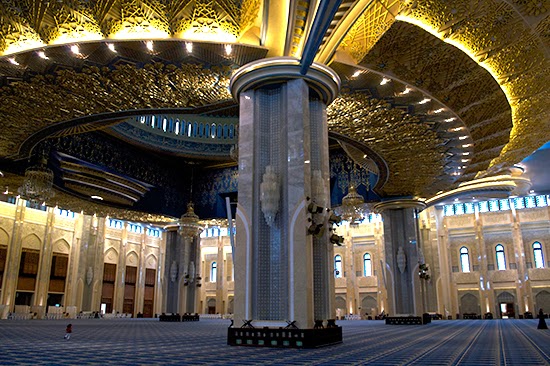 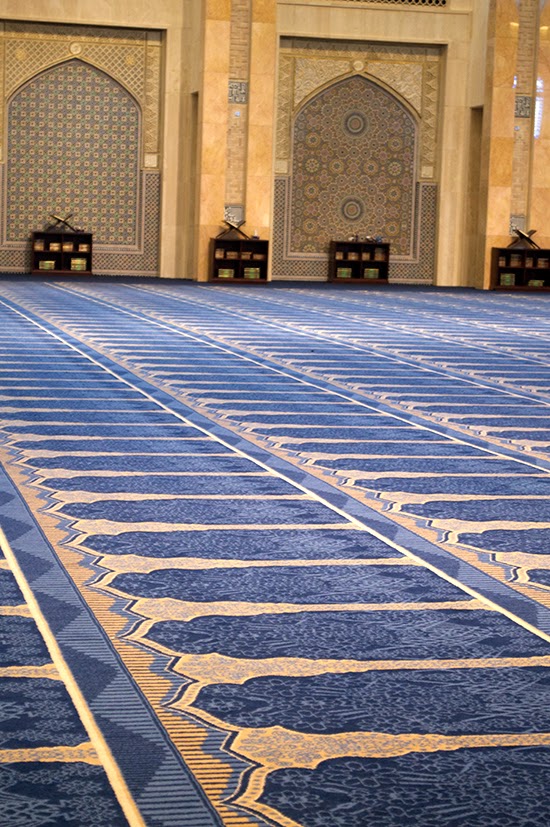 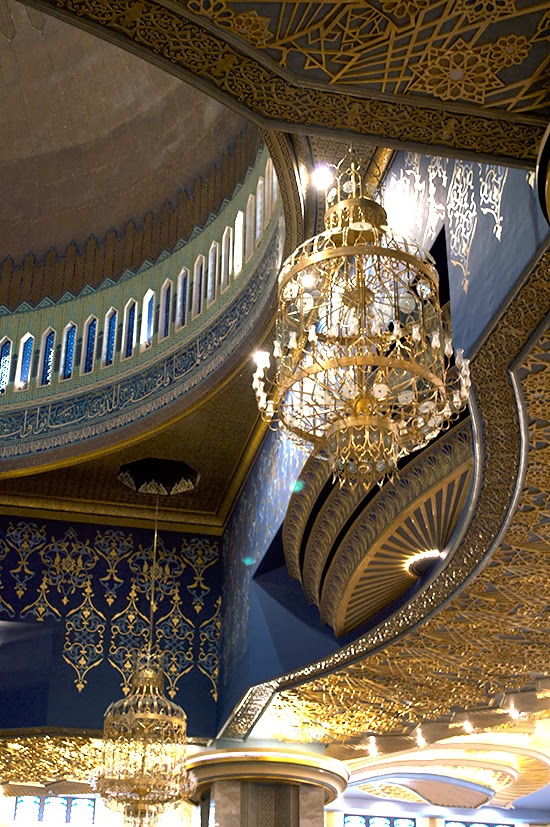 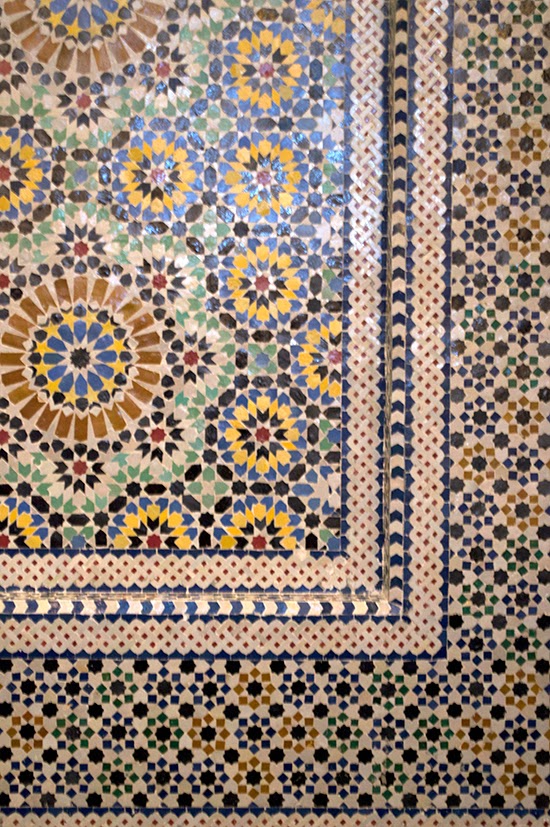 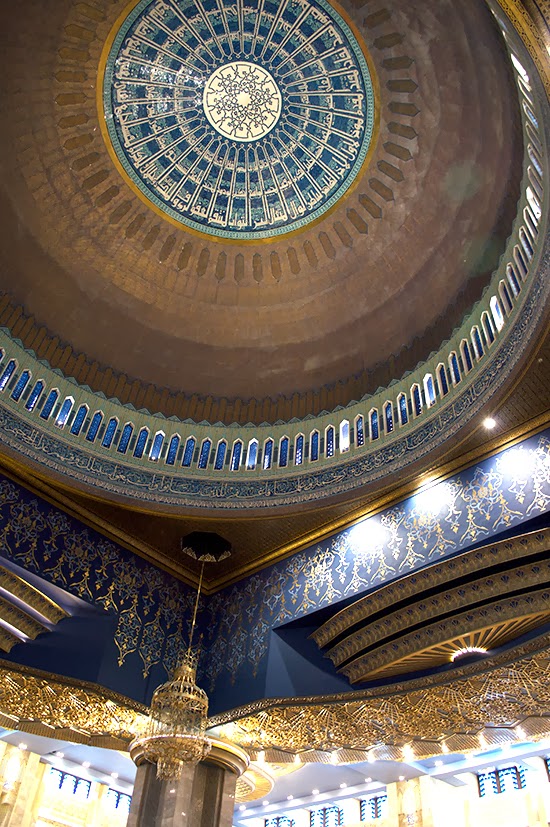 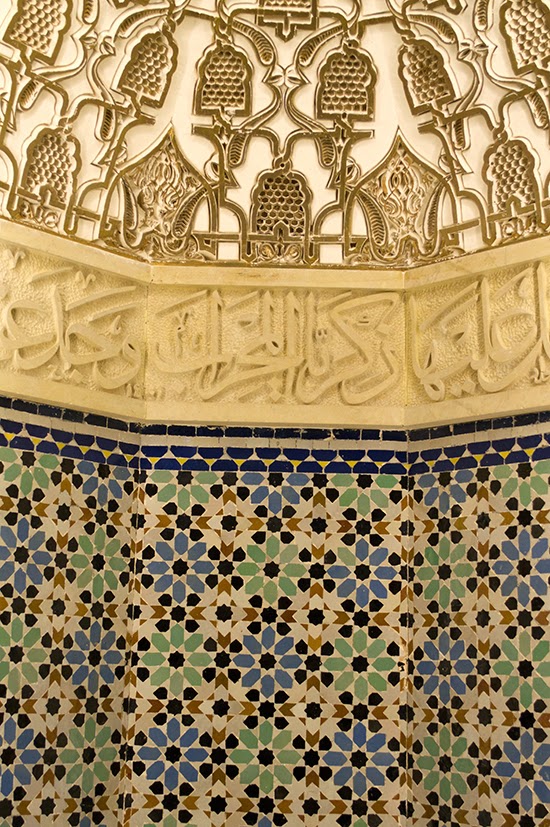 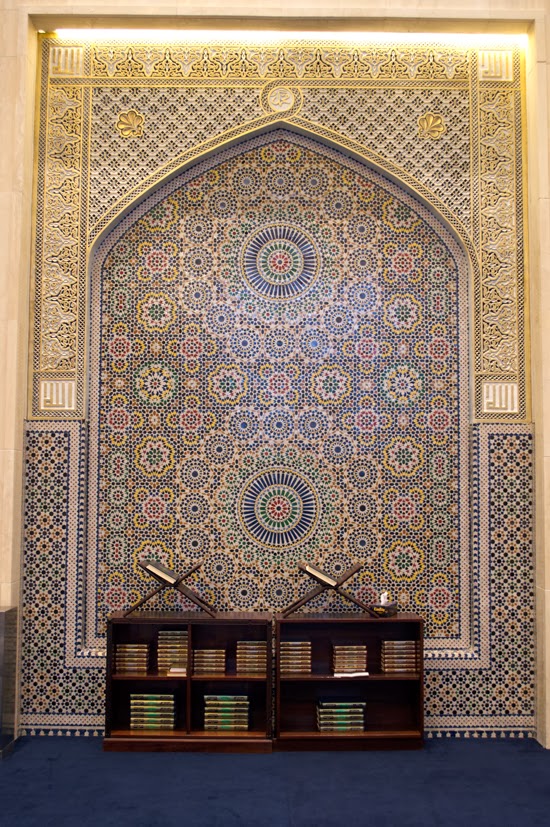 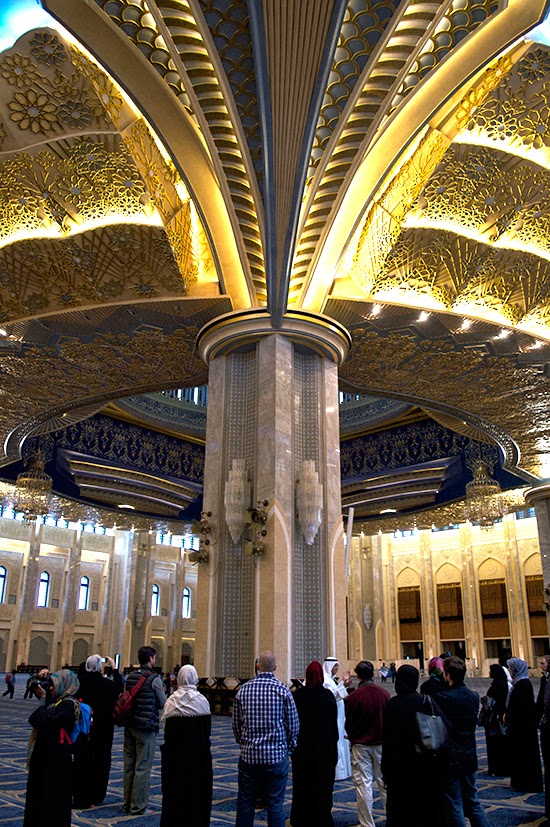 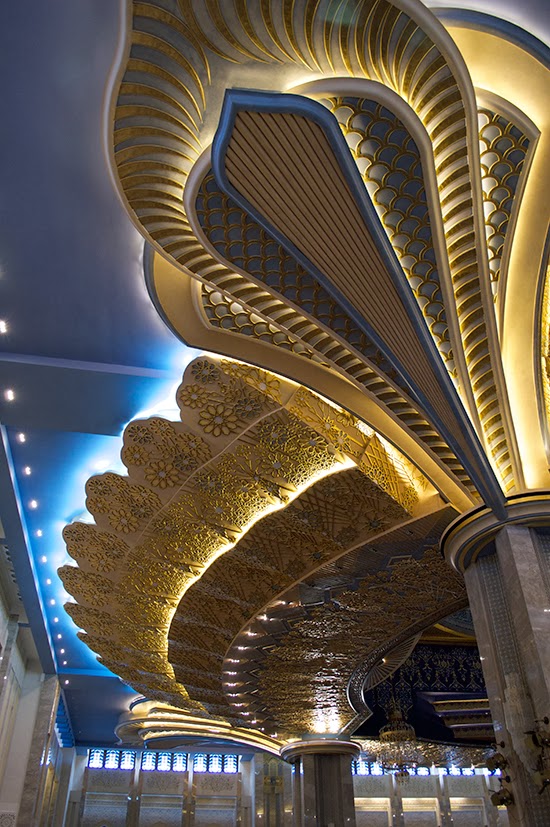 The capstone of the Grand Mosque, and clearly their most prideful space, is a side room that is reserved for the Amir and his guests when he comes to worship. He worships in the same space as everyone else – but afterwards uses this space to entertain his guests. The most impressive part of the room is the hand-carved gypsum ceilings. I can’t get over the incredible amount of detail and almost got a sore neck from trying to study it. 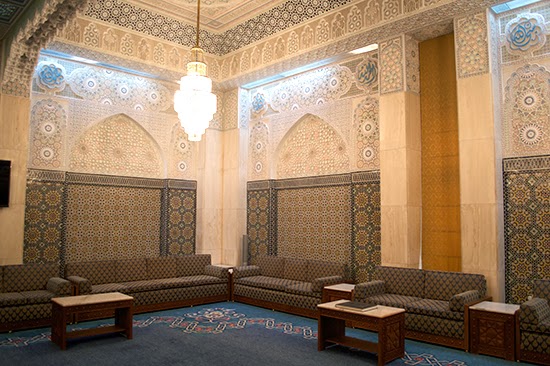 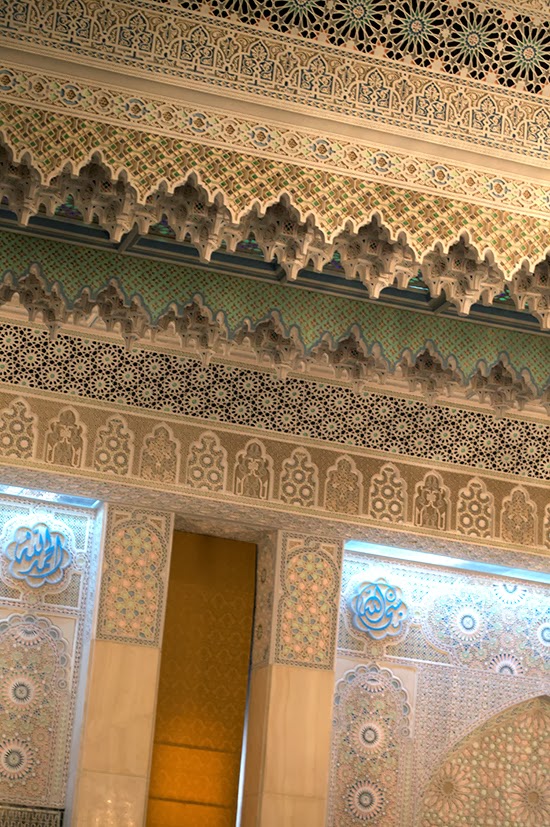 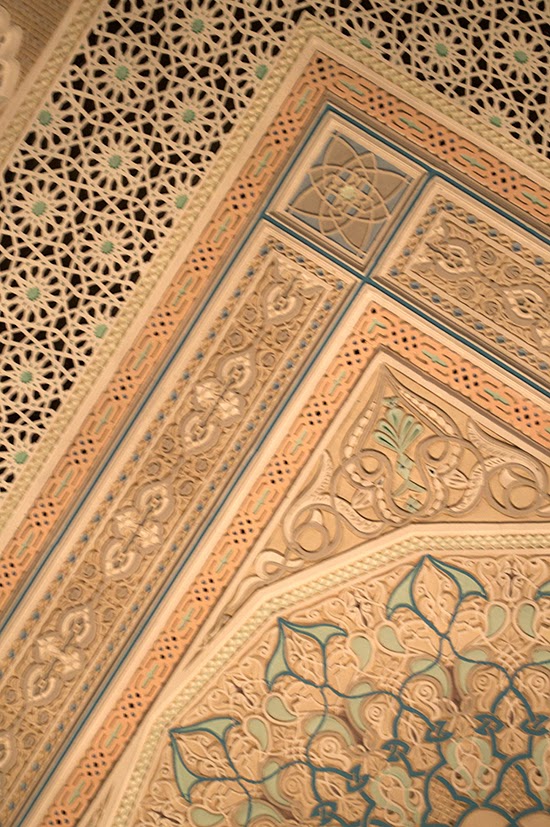 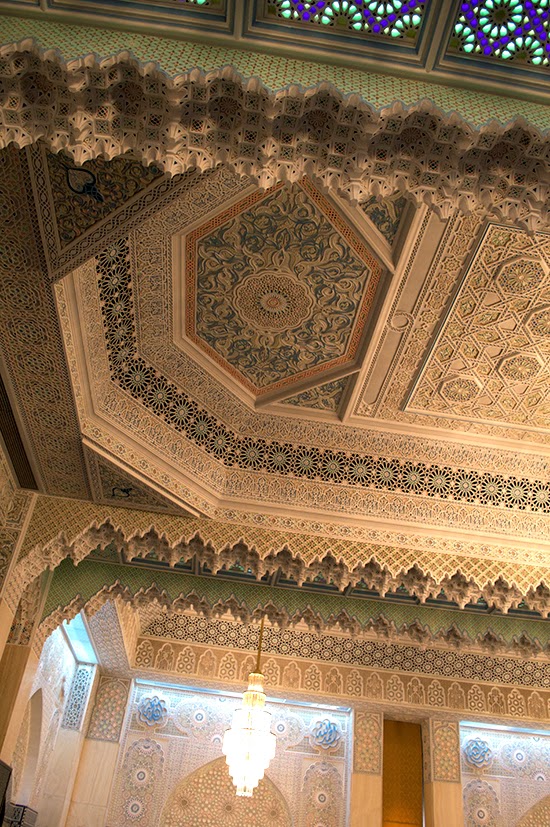 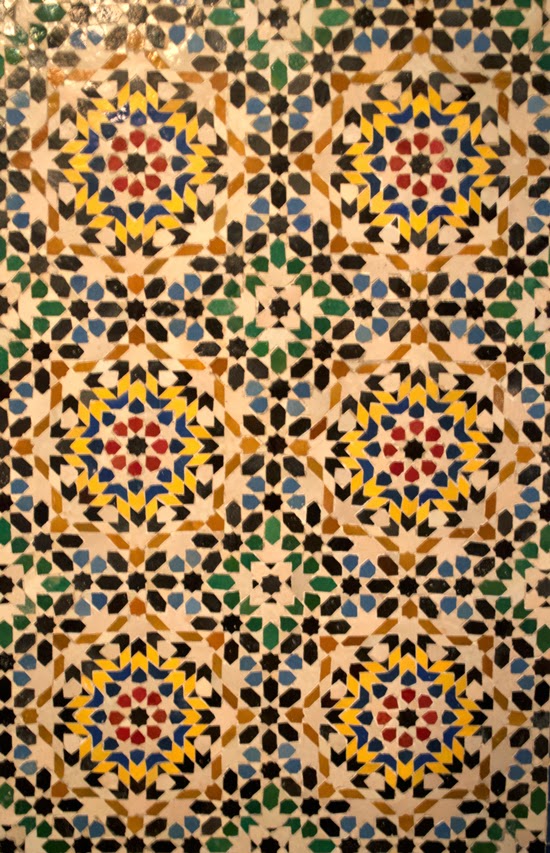 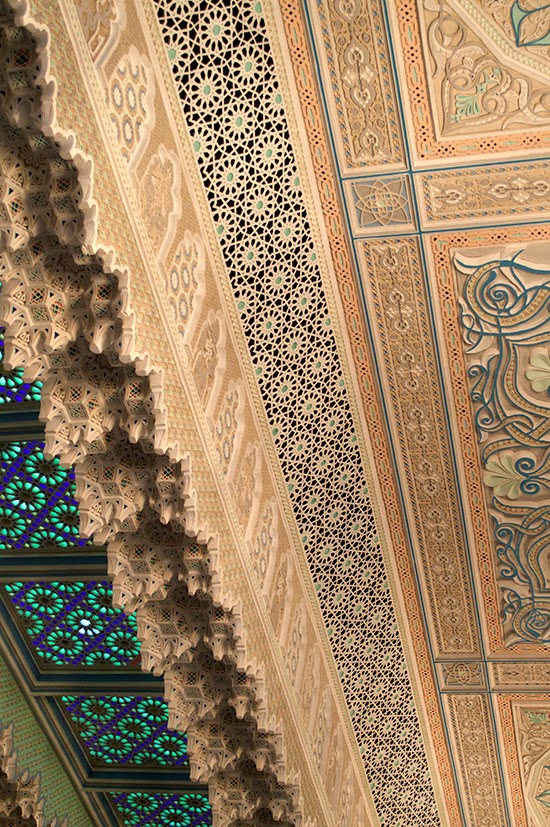 As with all Grand Mosques, the Grand Mosque of Kuwait is situated at the conceptual center of Kuwaiti daily life and physically between the political and financial institutions of the city in downtown Kuwait. It opened in 1986 and the main prayer room was recently renovated in 2013 (the outdoor façade and spaces and the ladies prayer room are scheduled to be renovated shortly). The main worship hall can house over 10,000 men and the women’s prayer room up to 950 on regular days of worship. During Ramadan, the surrounding gardens, patios, parking lots, and even the streets outside are transformed into suitable worship space that accommodates hundreds of thousands of people.

The people component is what was missing on our tour. Although the space is impressive and beautiful, clearly a gift from the worshippers to their God, it didn’t seem complete without people. I can’t imagine the chills you would get when you feel the presence of God amongst the worshipers while they pray in unison bringing life and energy to the space.

Daily tours are available through the Western Perception of Islam Center Sundays through Thursdays at 9:00am or 5:00pm. To schedule a tour fill out the form on their website and plan to arrive on time (not too early as you will disrupt prayer time). Ladies, although you will be given proper attire upon arrival – abayas and headscarves – wear conservative, loose fitting clothes. You can bring your own headscarf if you’d like. Also keep in mind that you will remove your shoes for most of the tour while indoors.

When you arrive at the mosque, tell the gentlemen at the front security/information booth that you are here for an English speaking tour and they will direct you where to go or ask you to wait while they summon your guide. Pictures are permitted and encouraged. Tour usually last one and a half to two hours.

The AWARE Center also arranges a monthly group tour. Check out their calendar for upcoming events and tours.