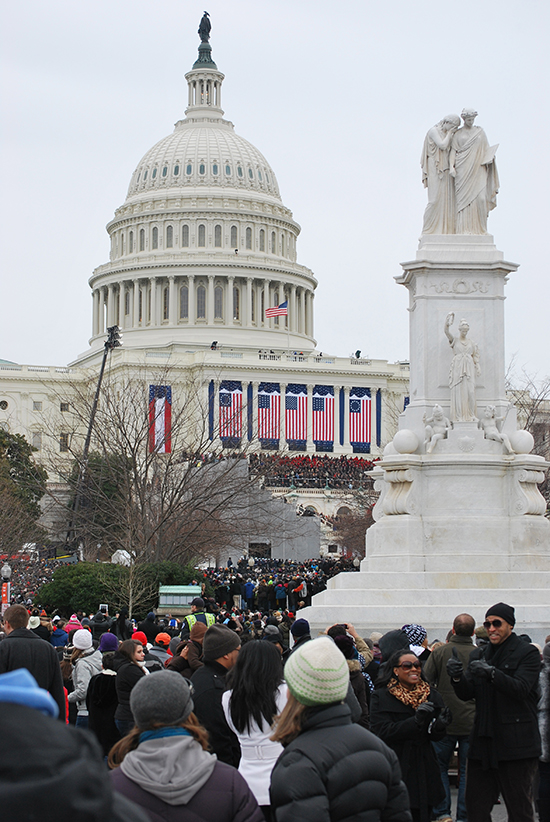 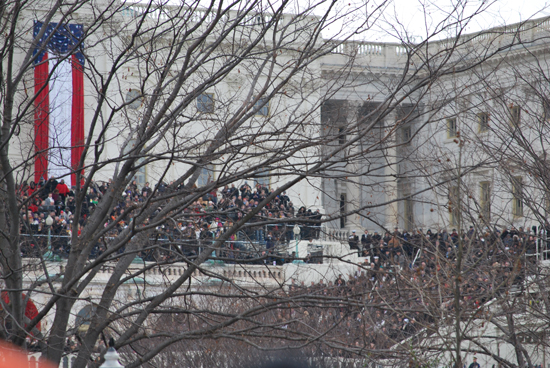 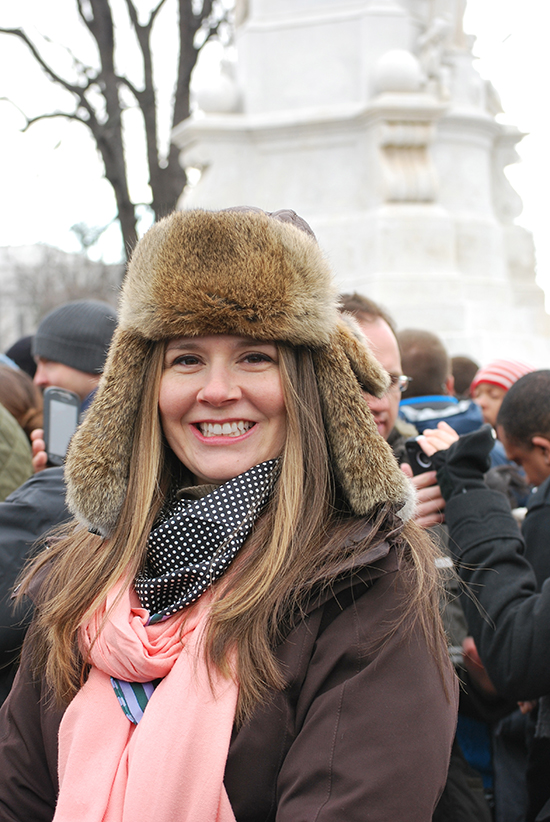 I had the honor of attending the Presidential Inauguration yesterday. I had every intention to live tweet my experiences and observations of my surroundings. My plan was to link to the twitter feed of my in-the-moment feelings today and encourage a conversation about your comments on the event.

But as life seems to go sometimes, I had no cell service the entire time. I couldn’t even send a text message. It forced me to be in the moment and observe my fellow Americans on a truly historical day.

My friends and I arrived to our gate at the appointed time and came to find that they were not letting anyone in. Huge crowds got even bigger as people stacked up waiting to get in. Finally after an hour of patiently waiting, we entered the first holding pin. Another 20 minutes and we are up at the security line, where each person is screened, one at a time. People in the crowd weren’t as aggressive or pushy as I was expecting. And not as rude either. Most waited with excitement, talking to each other about what they were expecting to see, how cold it was, and how we might end up missing it because of the delay. We finally made it to a reasonable spot just in time to see Vice President Joe Biden swearing in. 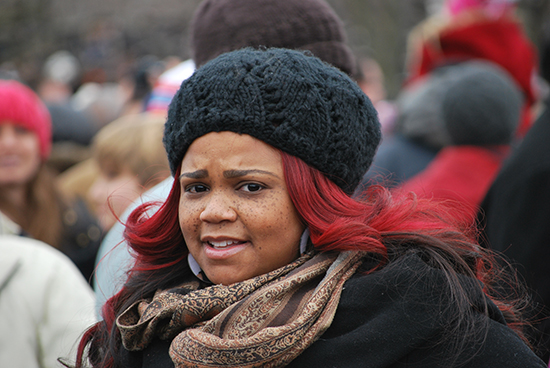 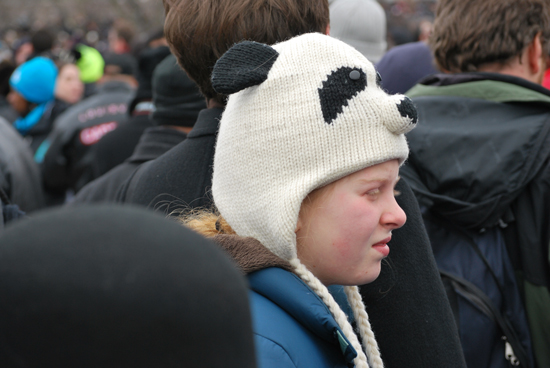 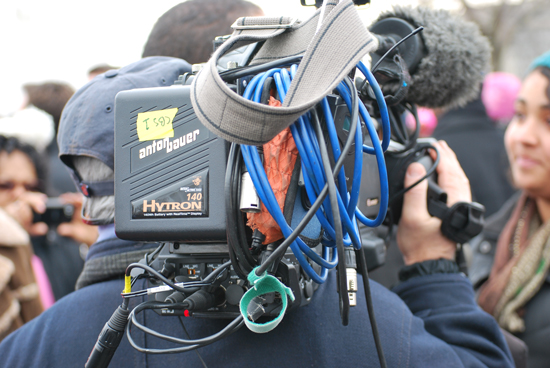 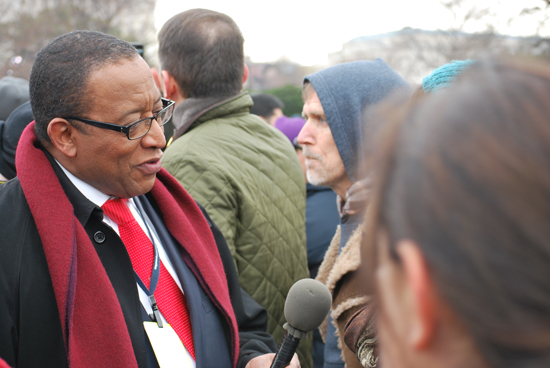 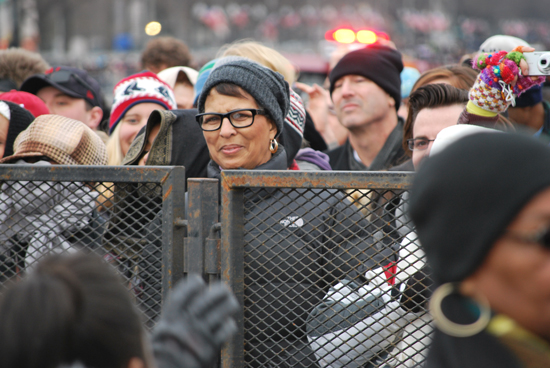 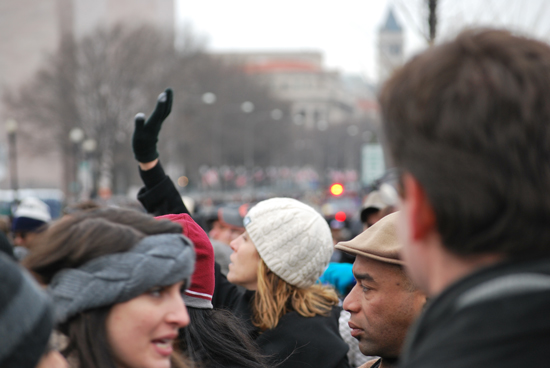 The crowd tried to listen. They wanted to hear President Obama’s speech and they wanted to take their picture, proving they witnessed it. During the speech, Mr. Obama’s voice echoed on the loud speakers, all the way down the Mall back towards the White House. Each word seemed to be spoken three or four times. The man next to me had his headphones in and was recording the speech on his ipad. Presumably hundreds of others, who had their phones in the air, were doing the same thing. Many people were very focused on capturing the experience instead of experiencing it, which was also my plan originally. The child next to me was sitting on the ground playing Angry Birds while her parents split their attention between each other and the President. People were proud to be there, wearing hats, pins, scarves, bags all plastered with “OBAMA” and “I was there Inaugural 2013.”

It’s funny because when you go to events like this, or sporting events, you can usually get a better view of the game or presenter from the comfort of your TV at home. We couldn’t see the President from where we stood. But when you go to the game its about camaraderie. It’s about being with people and experiencing life together. I got so caught up in it all that I almost bought a souvenir Washington D.C. snow globe! 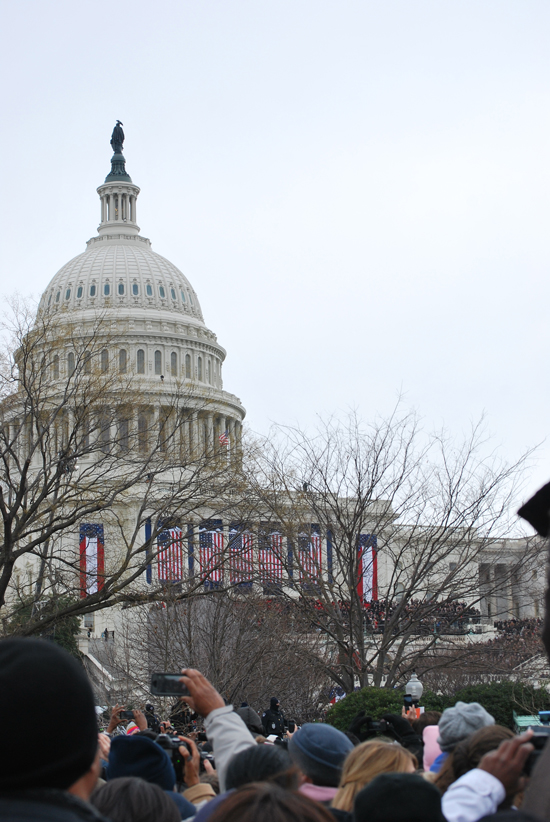 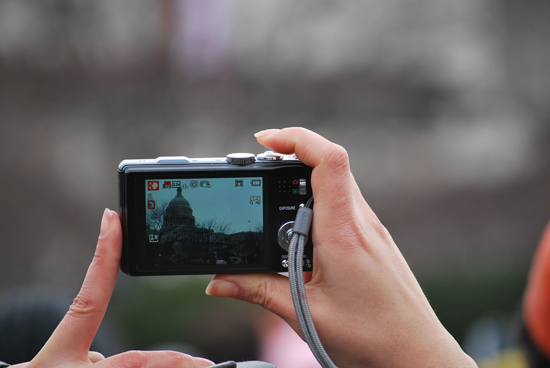 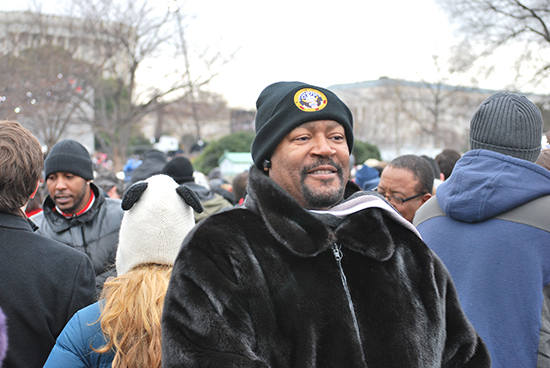 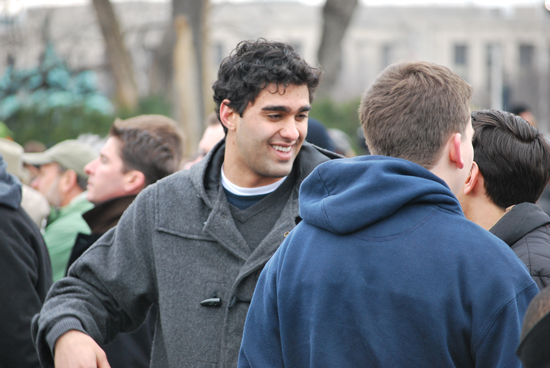 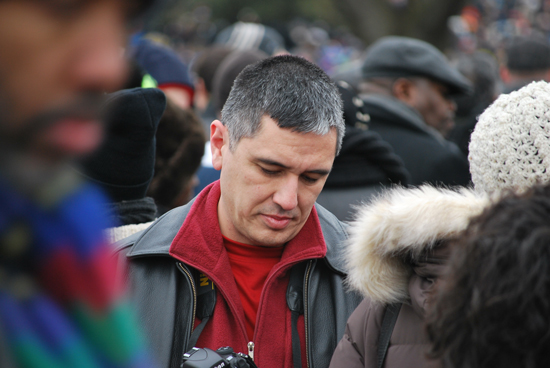 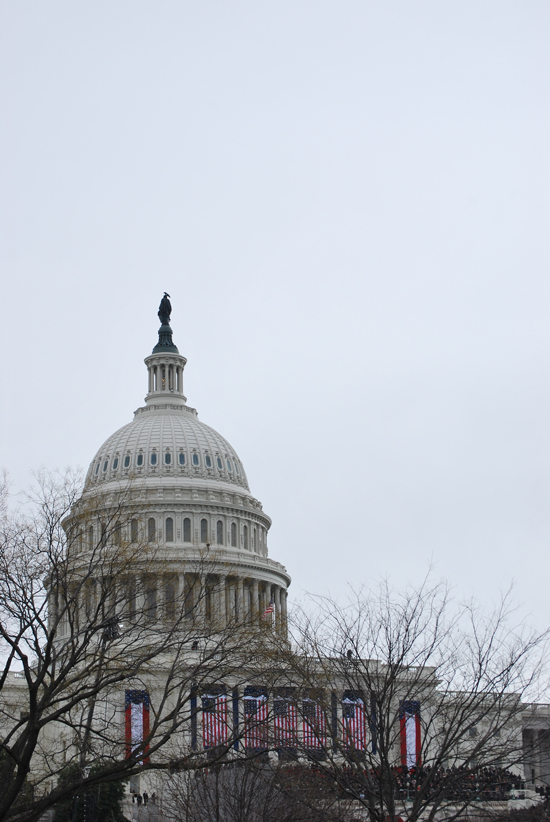 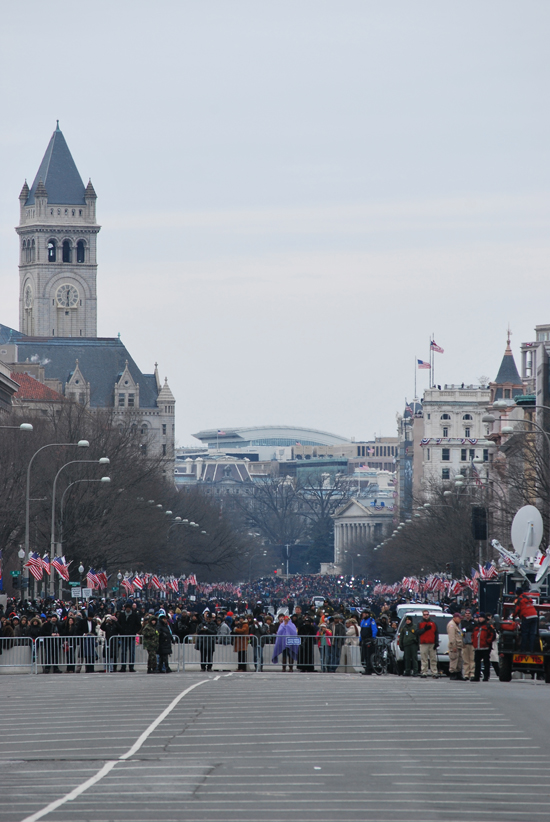 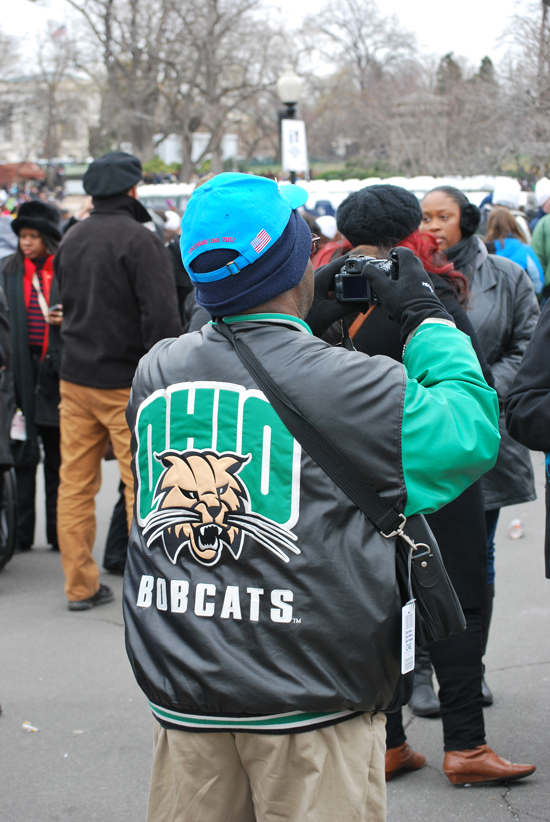 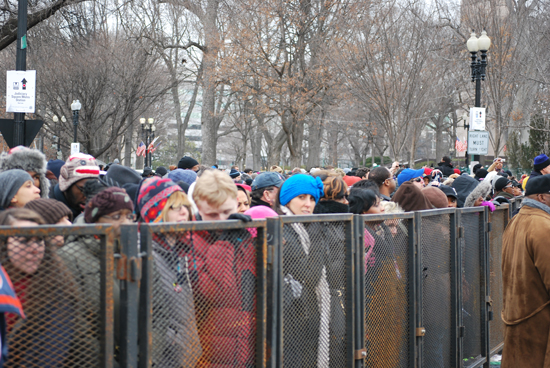 Later, the news noted how this was the speech that Obama’s liberal followers were waiting for and couldn’t wait to start picking it apart. But that’s not what I got out of it. I didn’t hear a bunch of liberal ideals and agendas. I saw hope and joy on the faces of my fellow Americans as they got to stand together peacefully on the lawn of the Capitol Building witnessing our democratic system actually work. They were proud to be part of a country where we can peacefully transition leadership (even though in this instance the same man was re-elected). We were all there for the same reason, in the same gated off area, taking pictures for each other.

As we walked back home, I watched as people celebrated in the streets and found their way to their parade seats. I couldn’t help but think about what I had just witnessed. I thought about the words at the beginning of the speech, quoting from the Declaration of Independence:

"We hold these truths to be self-evident, that all men are created equal, that they are endowed by their Creator with certain unalienable rights, that among these are Life, Liberty, and the pursuit of Happiness."

I think Mr. Obama was calling us to make this statement real now. Don’t give up on the system, don’t throw in the towel and stop trying because “only people with money get things done” or “I’m just one voice.” History has proved that we can ignite passion in each other and accomplish great things together. For several hours I stood amongst a crowd of people that, as completely different as they all were individually, I believe could do just that.

Special thanks to my friend Nick for generously giving me his extra ticket and taking some of these great pictures!
Posted by Jamie at 12:58 PM