I went to three art exhibitions in one night last Thursday. It was partly because I over commit myself. I must like the challenge of being insanely busy. I do sleep sometimes. On the weekends. As I reflected on my evening I kept thinking about how different the three exhibitions were and how each of the artists responded to the space. The exhibition space sets the tone for the pieces being presented and in general the artist is working with spacial limitations in mind.

Historically, a painting would need to fit on the wall of the patron’s house or the size of a sculpture might be affected by the size of the courtyard it would sit in. Today, although the variety of media an artist could work in spans the amount of materials available on earth, spacial constraints are still considered. Where will the art live and for how long? Let’s consider the three shows I went to as an example.

The first was a quiet opening for one of the Corcoran College of Art + Design's photography classes. A young photography class presented their latest project for critique by their professor and peers. The critique space is a long wide hallway between some of the classroom/studio spaces. All of the artwork had to be carried by the student and hung with relative ease on simple hangers or nails. The show was very temporary with another class coming in days later. So the photographs were small in scale. On a side note: I’m impressed by the quality of work the Corcoran’s students are producing. Keep it up! 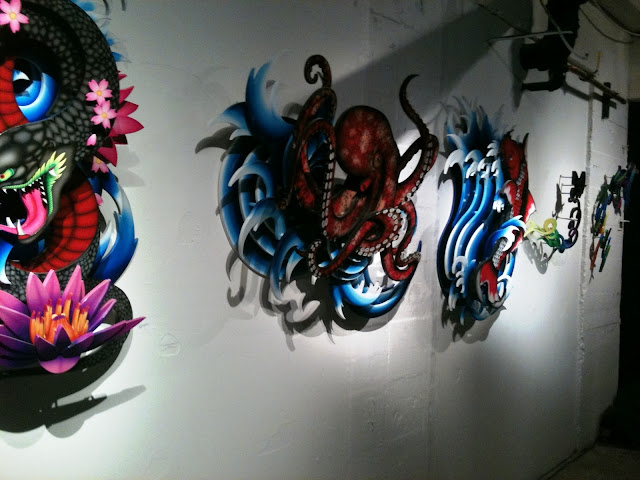 The second exhibition was the opening for Desks as Portraits: An Inside Look at the DC Art World by E. Brady Robinson at FotoSpace in Adam’s Morgan. The show was photographs of various desks of people who work in the D.C. art scene. A few were people from my office and it was fun to see their desk presented as a portrait of their working life and habits. Some were unsettlingly accurate in their description.

Fotospace is a small gallery. There is some wall space but not enough for the amount of images Robinson created for this show.  So what to do? Hang them on top of each other? She chose to present her photographs as a projection on the wall and on a monitor. The images were shown on a loop, one by one. I didn’t like it at first as I am used to seeing photography printed and hung on the walls. However, as I considered it more, I really appreciated her thoughtfulness in choosing to present the work in a way that was relevant to the subjects being presented – desks displayed on a PowerPoint Presentation. Once I realized that, I laughed about it to myself for longer than I should have. 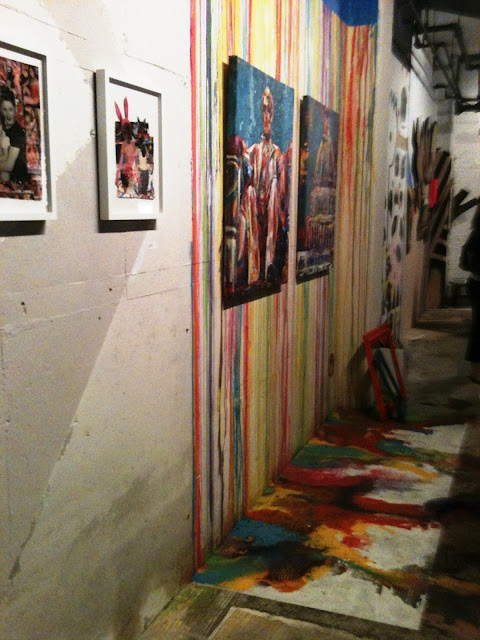 To end the night, I headed over to the Water Street Project in Georgetown. This show was a pop-up gallery in a raw warehouse space with brick walls, concrete floors, the whole deal. The space was open for a week and presented new work by emerging artists which would be surrounded by live music and performances. The artists included several graffitists, like Kelly Towles, who painted directly onto the walls and floors while installation sculptures played off of the rough unrefined space. Maggie O’Neill’s colorful paintings of President Lincoln and the Capitol Building responded to D.C. at large while Drew Storm Graham’s tattoo inspired sculptures appealed to the alternative crowds browsing the artwork. All of the pieces responded to the raw and ephemeral nature of the temporary show.

It was neat to see how the artists at all three exhibitions dealt with the space of their temporary exhibitions. Next time you are out looking at art think about how the artist considered their surroundings when creating it and how the gallery or museum thought about the art in the space as well (such as how historical paintings are hung). It might lead to insight into the meaning of the work or lead you to appreciate it in a new way.