Whenever I tell people I'm an art historian, they ask me, "who's your favorite artist?" That's like asking me what my favorite food is or my favorite pair of shoes, how could I decide? I like many artists and works of art, I have favorites in almost every genre and time period and get excited when I see something I haven't before.

But I do have a few all time favorites. And one is Henri de Toulouse-Lautrec. You know his work too, even if you never put a name to the familiar. He's one of the greatest post-impressionist artists and painted famous images of the Moulin Rouge. You might even have a poster of his work in your home without realizing who he is or why it is important.

Henri de Toulouse-Lautrec was born to aristocratic parents who supported his artistic pursuits. During his formative years he suffered two leg breaks due to a medical condition caused by, well, inbreeding. This lead to his body growing to adult size but not his legs. He leaned into painting and alcoholism to deal with his physically issues, the latter eventually killed him. He hung out in the Montmartre area of Paris, much like his other artist friends at the time and received a commission to paint the posters for the newly opening Moulin Rouge in 1889. He hung out there a lot and you can see the carefully observed details of the people he spent time with in the paintings. He became famous for realistically portraying those seedy figures central to Parisian nightlife. 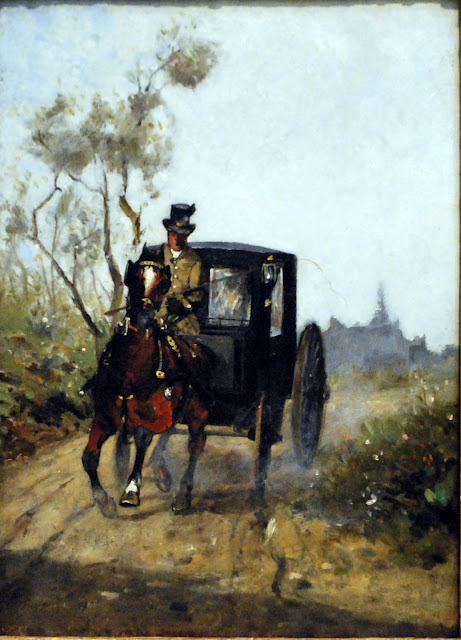 I love his brush strokes, colors, and lines, basically everything about his work. The brush strokes sensually touch the figures and objects they represent, as if he was just brushing the paint onto the actual figure and not a canvas. Although the perspective is often flattened and the figures simplified down to shapes, there is a lively energy to every single line and a delicate, humane sense of vulnerability in the scenes depicted. The people in his work seem disconnected and unaffected by his blatant voyeurism, perhaps they were like that real life, being performers and prostitutes. The colors keep your eye drawn in and searching even though you can't establish a relationship with the subject.

This painting, Carriage, which hangs at the Philadelphia Museum of Art, isn't what you typically think of when you think about Toulouse-Lautrec's work but it caught my eye as we walked through the gallery. Painted around 1881 (before the Moulin Rouge days) it depicts a horse-drawn carriage elegantly rushes down a dirt country road as the driver whips the horse along and its hooves and tires from the carriage kick up dust. I can't stop staring at the horse's front left hoof breaking out of the dust. What does it mean? Is Toulouse-Lautrec talking about himself breaking free or moving forward? He seems comfortable with the subject matter, but not bored. And although it isn't ground breaking, this is a beautifully executed painting that demonstrates his virtuosity. I would definitely hang it in my house.

PS - Isn' the frame awesome too? 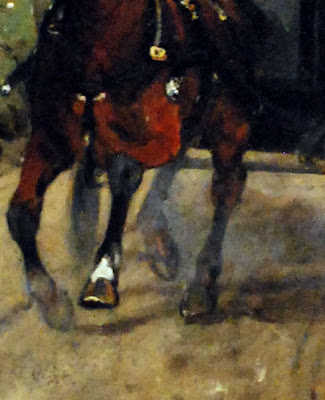