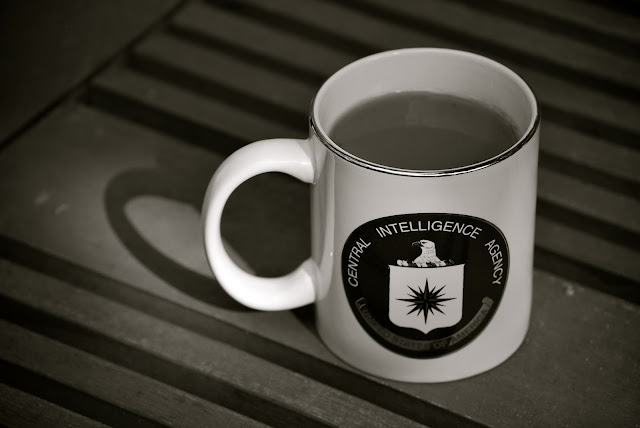 This weekend I had the pleasure of attending Family Day at the CIA headquarters in Langley, VA. I was mostly excited to go because I heard they had a few fine art exhibits and a very nice spy museum. It's hard to narrow down our visit to a single highlight, but it was really special to walk in the main entrance and see the famous seal on the floor.

Fantastic programing, special exhibits, and lectures were set up throughout the day and every hallway was jam packed full of people. Families with children especially had a great time practicing their spy skills, getting their face painted, and eating lots of free candy.

I was impressed with the architecture of new building (NHB) (and generally how perfectly clean and well maintained the facilities were) with beautiful inlaid pink and white marble floors, and floor to ceiling windows that flooded every space with fresh sunlight. It seemed like a really nice place to work! The cafeteria was also impressive. I know, my priorities revolve around food. They had a Dunkin' Donuts, Starbucks, Subway, Burger King, in addition they also had a fresh salad bar, soups, pizza, cold cuts, and a hot food bar. It was better than a mall food court.

I heard that the CIA owned a contemporary art collection similar to the Corcoran Gallery of Art's so I was very curious to check it out (I was quite possibly the only person there looking for contemporary art instead of spy gear). I was expecting an art exhibit, but the painting were spread out on the walls of the corridors. I recognized a painting by Gene Davis as well as a few others from the Washington Color School. I later learned that the paintings were either donated or loaned to the CIA from a former Director of the Corcoran Gallery of Art, Vincent Melzac, and the collection is called the Melzac Art Collection (ah, it all makes sense). What lucky people who get to work there and walk by it everyday!

We did check out the spy museum and the OSS exhibit too. Unfortunately there were so many people that I couldn't stop and read about each object. The spy museum was in two parts, one exhibit dedicated to the efforts in the war in Afghanistan and another focusing on the history of spy technology. I learned that a well dressed spy lady always wears a camera broach and carries bugged cigarettes. Note to self.

In case you aren't a history buff, the OSS (Office of Strategic Services) is the WWII precursor to the CIA. The exhibition included photographs, artifacts, and communications equipment from that time including the German Enigma encryption machine. I love looking at historical objects, especially ones so important to the fate of our world, and basically drooled on all the cases as we walked through the exhibits.

This agency full of secrets can be an easy target for conspiracy theorists or critics but it was nice to see all of the employees there with their families being honored for all their hard work and dedication. I am so thankful for the chance to be there! Special thanks to the lady that made it happen. You know who you are. ;)
Posted by Jamie at 10:39 AM