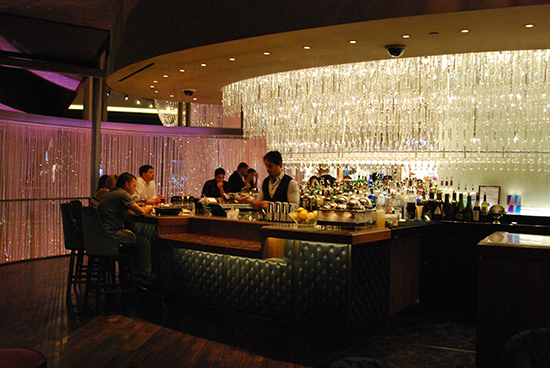 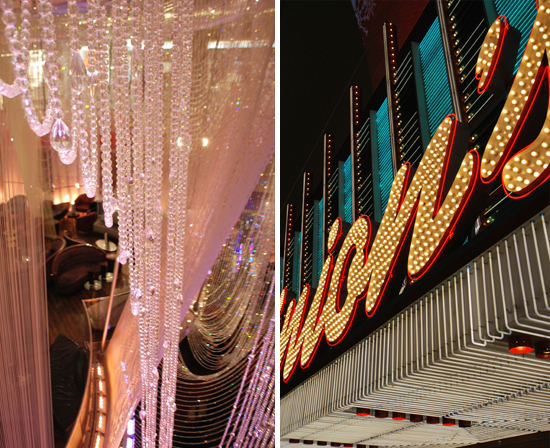 Las Vegas, Nevada. Sin City. How does one write a story about a city whose mantra is, “What happens in Vegas, stays in Vegas?” It’s a city that thrives on physical pleasure, over-indulgence, and letting go of “real” life’s worries and fears. You can get whatever you want, whenever you want, and lots of it. It’s a city built on consumption and fleshy weakness. A capitalistic oasis in the middle of the Mojave Desert.

The architecture and interior design of the hotels, casinos, and restaurants on The Strip are enough to overwhelm. One of my favorite spots was the chandelier bar and lounge at the Cosmopolitan where you get to have a drink inside of the world’s largest light fixture. It gleams with cheap luxury and you find yourself intoxicated from watching the very mixed crowd. Food in Vegas is served in two ways; at reservations-only-best-food-money-can-buy-celebrity-chef-owned restaurants or all-you-can-eat buffet style. One is encouraged to drink remarkable amounts of alcohol at all times of day, which can be purchased as easily and frequently as Starbucks coffee. Pretty much all of the most important and luxurious brands are available for purchase as well; Gucci, Louis Vuitton, Mulberry, Balenciaga, you name it, you can buy it. There are more live shows than you can imagine; from Cirque du Soleil to traditional showgirls at Bally and even male reviews, one aptly called, “Thunder from Down Under." 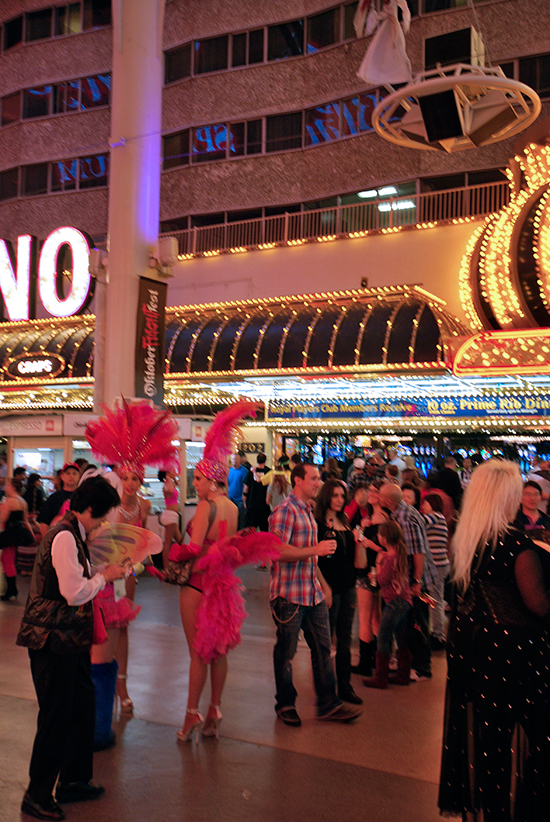 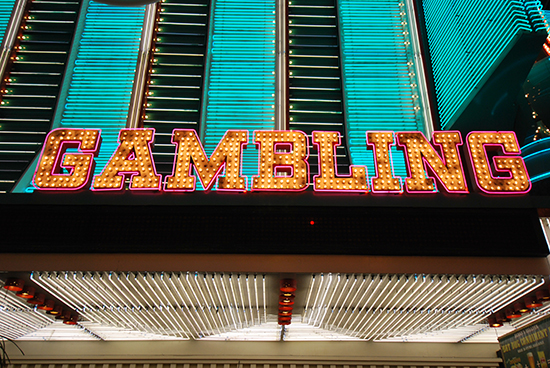 If that isn’t enough for you, be sure to take a taxi over to Fremont Street to check out the neon sign walking tour, the Hand of Faith at the Golden Nugget, and a chunk of the Berlin wall in the men’s bathroom at Main Street Station (thanks, Sonja!). I haven’t even mentioned the gambling and sexy nightlife.

As with most people these days, I stalk my friends on Facebook. I have one girlfriend who is always, or seemingly always, going to Vegas and experiencing fabulousness day and night. As my trip got closer, I stalked her to see what she and her friends would wear so that I could plan a wardrobe accordingly (mini-skirt, check. Bandage dress, check). I saw all these pictures of her at the pool, drinking frozen drinks, getting tan, and listening to a live DJ, pretty much living the dream. I wanted to do that. It became my goal, my obsession over the course of planning. If I did nothing else on this trip, I wanted to sit at the pool and surround myself with sexy people, listen to loud music, and have a cocktail.

After a relatively relaxing morning of travel, we arrived to the Mandarin Oriental before noon on a bright, warm, and sunny Saturday in September. (Stay at the Mandarin if you ever get a chance, it is first class all the way.) We were meeting Gman’s family there to celebrate his sister’s nuptials, which were taking place later that weekend. As I unpacked my bags, I realized my swimsuit, flip-flops, and other pool gear was missing. Dang it! In the haste of packing I’d forgotten to pack the one thing I planned on using most of the trip. The concierge told me that CVS might have one, if not there were plenty of shops, and even a Ross on the strip. I made plans to go shopping first thing Sunday morning so as to allow for enough time to lay out. 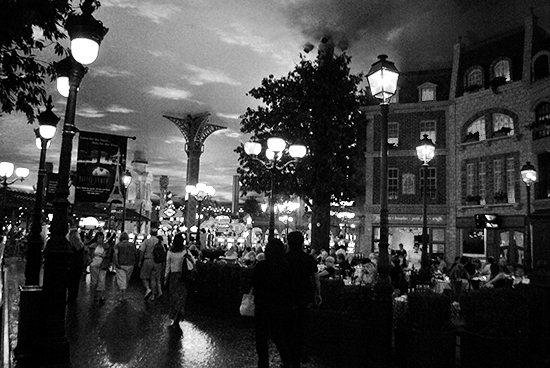 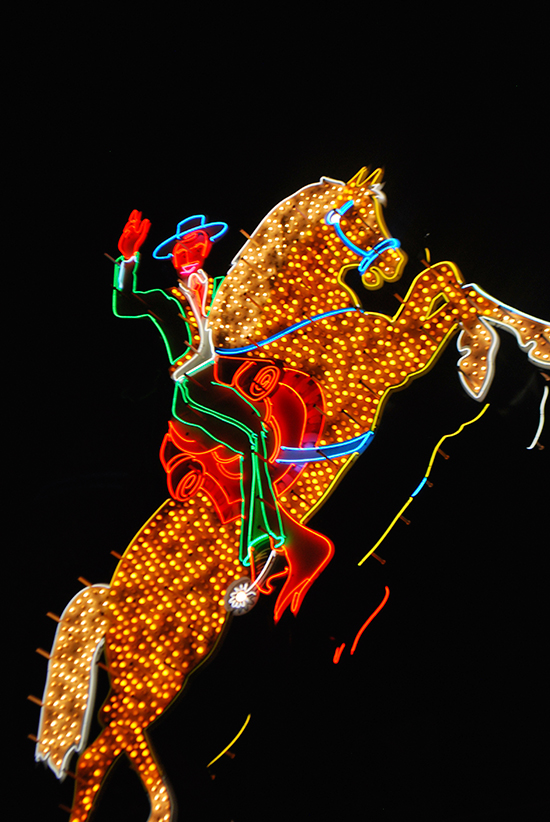 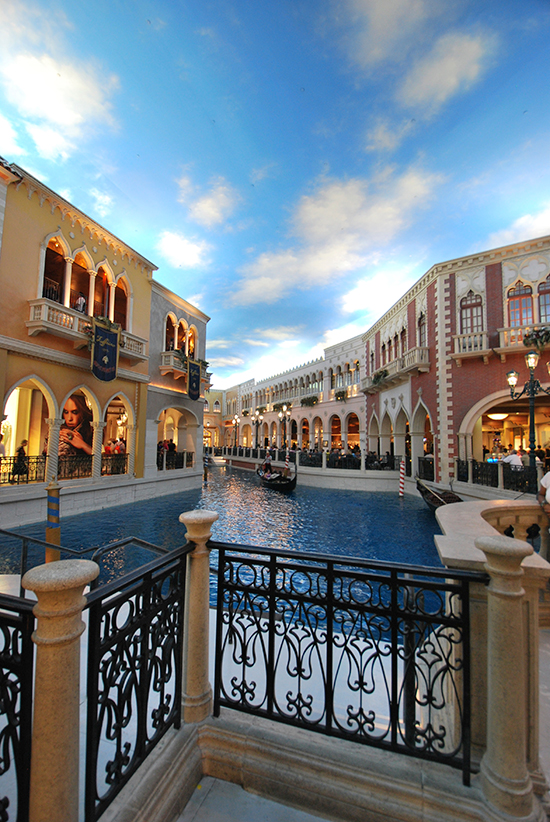 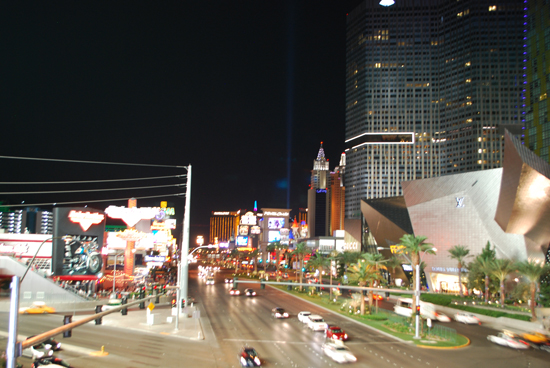 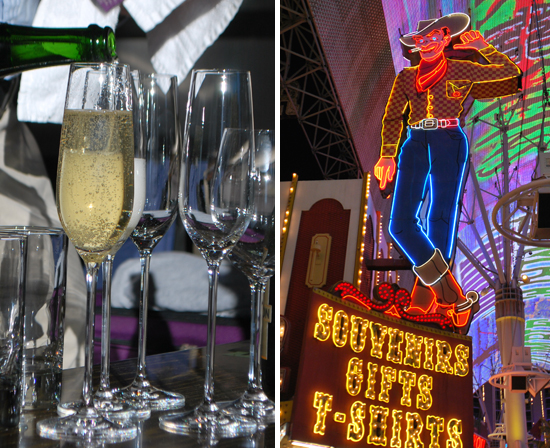 When Sunday morning arrived, we went to breakfast at the Luxor, as we heard it was the cheapest decent eggs, bacon, and pancakes you can get on The Strip (I found this to be true). On our way back we stared our search for a bikini. CVS, Ross, and number of other stores were total strike-outs. No one even carried swimsuits. I started to feel defeated. We ducked into a touristy shop to grab a six-pack of Miller High Life (for $6! And you can just drink them in the street (keepin’ it classy)). Once in the shop (which also sold fresh frozen yogurt, what is this place, best store ever?), we saw they sold souvenir type clothes and inquired about bikinis. I was lead to a dusty corner where, hooray, there were bikinis! And for $30, no less. The only thing was, they were silver lamé and probably the tiniest cut I’ve ever seen. I considered abandoning my bikini plight, but when life hands you lemons… I ended up finding a black one, but for the sake of the story, imagine that I went with the silver lamé. I also bought gray cotton shorts with the words “Las Vegas” written in large hot pink lettering across the butt.

Overly proud of my purchases, we head back to the hotel. I changed into my new outfit and realized that I should have also picked up some flip-flops because the only shoes I brought were dark brown suede driving moccasins. I decide at this point it can’t get any worse and I wore the mocs with my tighter than expected Las Vegas shorts down to the pool.

It turns out the pool at the Mandarin Oriental is the last oasis in the middle of The Strip where there is not a DJ and almost naked youth, but instead, relaxing spa music and people who are looking to quietly read whilst getting sun on their legs. Also, Gman’s entire family decided to meet us at the pool and have a drink. So there I stood, having my Vegas pool experience wearing my tiny bikini and suede mocs, drinking a $9 Stella chatting it up with Gman’s sister, parents, brother-in-law, and cousins. Maybe the city's motto should be, "what happens in Vegas will likely not happen elsewhere." 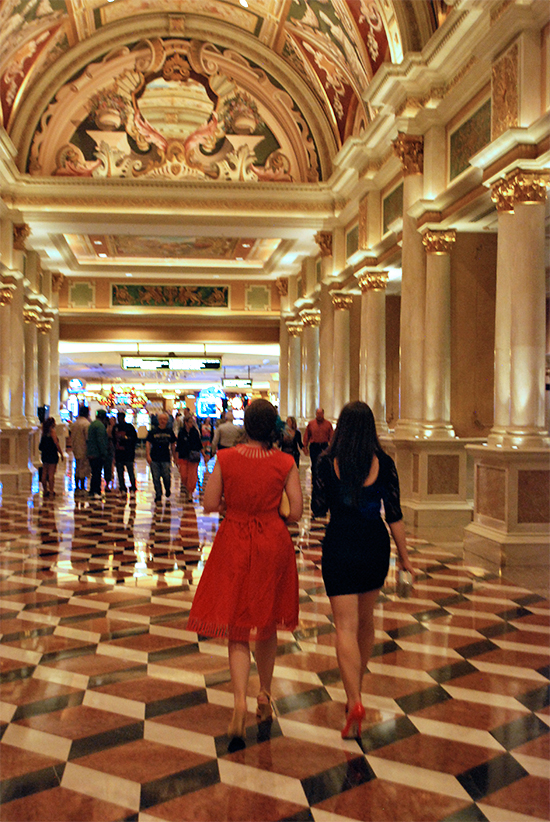