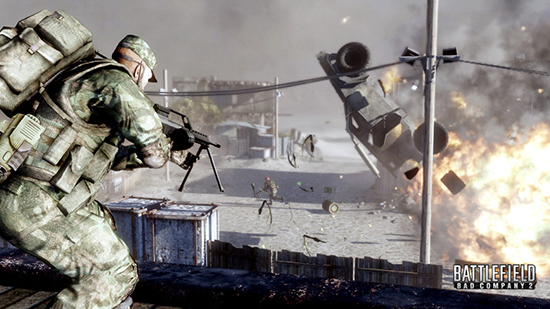 Battledfield is a military game series, played in the first person. It has two gaming options: story mode which you play a heroic soldier in a challenging military adventure, and multi-player mode which you play live with other gamers in order to play “realistic” battle scenarios on teams.

People who play multi-player military games are loyal to one of two camps: Battlefield or Modern Warfare. They have similar goals, kill the most amount of times, and be killed the least amount of times, but the game playing experience on each is much different. Gman is loyal to the Battlefield camp. In Battlefield, the boards are larger and you can interact with your surroundings. If, for instance, an opponent is hiding in a building and shooting at you, you can blow up the wall they are hiding behind and kill them. The wall is then gone for the rest of that gaming session. (People can’t just sit in a cardboard box and snipe the whole time; which is pretty much the most annoying thing someone can do in multi-player games.) Both Gman and I like this aspect of the game, as it changes your strategy as you play.

You can use the vehicles placed around the boards, too. Jump in a tank, run over trees, plants, other cars, drive through buildings, and even shoot anti-aircraft guns at helicopters being flown by other players. Drive around with wreck-less abandon, or you can take a four-wheel motorcycle, put multiple sticks of C-4 on it, then ghost ride it into whatever you want – players, tanks, walls. By the sounds of his snickers, Gman is most entertained by this. 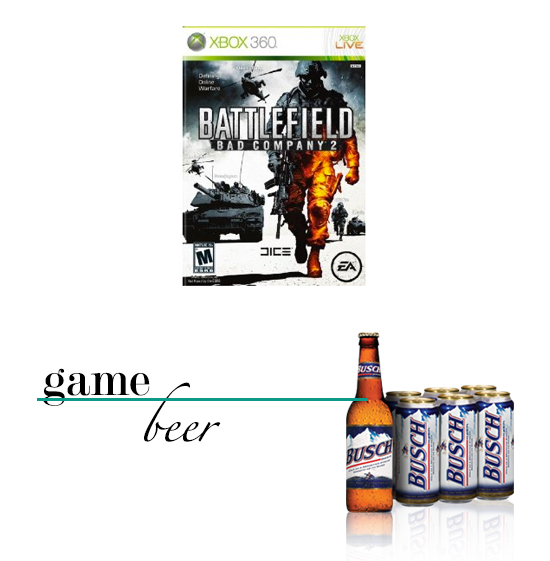 The key aspect of the game is whom you are playing with. It’s important to find a good team and develop a strategy, versus just mindlessly shooting at everything. As an observer, this is also better for me. Normally, I can’t hear the game, as Gman wears a headset (best Christmas present EVER), but if things aren’t going well (usually a result of a bad team) then my quiet evening of trolling the internet reading is disrupted by strings of loud profanities.

The first person military games are very patriotic and they are the epitome of the type-A American male; oozing with testosterone and bringing out one’s competitive side. Many stereotypes of soldiers come to mind when I think about the soldiers in this game; perhaps these young men also like hunting, fishing, and Nascar.

So what would a small town private driving a tank, and blowing up buildings, reach for during a lull in combat? It would have to be something ubiquitously American, something easy to drink, and something cheap…

We paired Battlefield with Busch. One can grab a six-pack of Busch beer for under $5 and it is a product of the USA made in St. Louis, Missouri. Some would argue that this pilsner has no taste or that those who drink have no taste. But Gman and I would beg to differ. After a long, hot day, of manual labor you reach for something light and refreshing, and a pilsner is perfect, it’s like drinking water. Plus, as our liquor store attendant put it as were checking out with our six-pack, “you won’t have to worry about anyone stealing your beer.”

What beer would you or do you pair Battlefield with? Please leave your pairing in the comments below.