A World Apart: Anna Ancher and the Skagen Art Colony


The National Museum of Women in the Arts highlights one of Denmark’s national treasures, Anna Ancher, and the colony of artists in the remote Jutland peninsula town of Skagen in the late 19th century in an upcoming exhibition, A World Apart: Anna Ancher and the Skagen Art Colony.

Anna Ancher lived her entire life at the tippy top of Denmark in the small remote town of Skagen. Many artists (including her eventual husband Michael Ancher) came to Skagen to paint. Her parents, Ane and Erik Brøndum, owned the only local hotel and it became the artist hangout. Because of this Ancher was exposed to many of these painters at an early age.

During this time, 1870s-ish, many artists were moving away from crowded industrial cities to find idyllic landscapes and rural towns to paint in (remember Monet moving to Giverny? Where he painted the waterlilies? Yes?) Artists going to these remote locals started forming groups, which we art historians call ‘colonies.’ In Denmark, a few of the artists attending the Royal Academy of Fine Art in Copenhagen started traveling to Skagen to get away from it all and to paint the fisherman. They formed a colony and Anna Ancher, the only local, was one of their leading painters.

This is unusual for the time as women weren’t allowed to do much outside the home and they certainly weren’t encouraged to continue working after they were married and had children. Not only did Anna continue but she enjoyed a fruitful partnership with her husband, Michael. Since the day they met he encouraged her to paint and they even completed a significant canvas together in 1883, Judgment of a day’s work. Notable Danish artists came to the colony including Carl Locher, Viggo Johansen, Christian Krogh, Laurits Tuxen, and P.S. Krøyer, whose work is also featured in the exhibition.

The Skagen colony of artists was part of the “Modern Breakthrough” movement in Denmark, which sought to break with traditional painting of religious and royal painting and paint what was real, what was going on around them. Their painting looked back at Dutch Old Master painting and looked forward at their contemporaries painting Naturalism, Realism and the loose expressive brushwork of Impressionism. 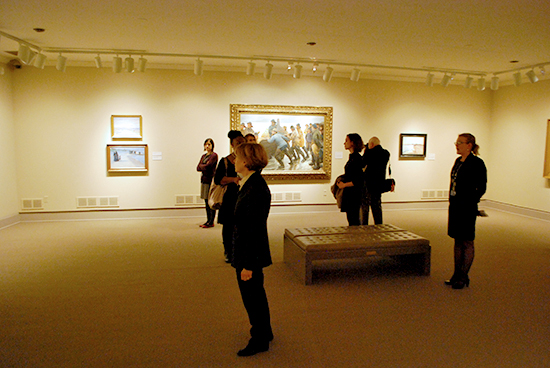 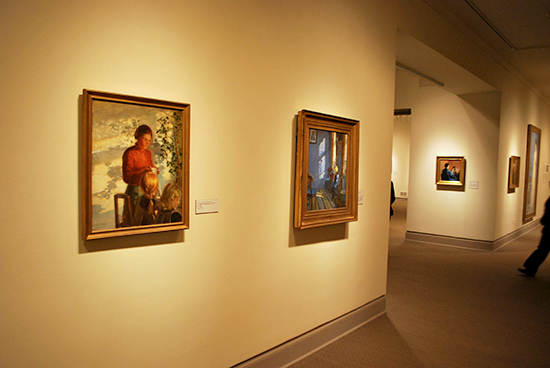 What set the colony in Skagen “A World Apart” was their depiction of light. These artists just didn’t randomly end up in Skagen, they came here because of the specific type of light occurring in this place. The light in the summer lasted sometimes for 24 hours and permeated everything it touched illuminating the banal and daily goings-on of life in the small fishing town. To expand on above, in painting style, you can see references to Dutch still life, portraiture, and domestic interiors (Vermeer and Rembrandt come to mind). The Dutch Masters were arguably obsessed with the way each material reflected and absorbed the light. Impressionist painters were also interested light. They were showing how light and time can change a subject, like Monet’s Haystack paintings, but the colony in Skagen was interested in the light itself.

This can be seen in Ancher’s work as NMWA’s Associate Curator Virginia Treanor points out, “when Anna Ancher paints light, it’s contained, geometric.” My favorite painting in the exhibit, Evening sun the artist’s studio, after 1912, best demonstrates what the colony at Skagen was exploring and how Ancher was making innovating and interesting paintings. This painting depicts a blue colored room with minimal furnishings – two frames leaning against the wall towards the bottom-center of the painting, a thin wooden side table with a few books resting on top. In the bottom right hand corner, along with the side table, another brown colored object is cut off from view. Much of the painting shows the blue walls (one almost perpendicular to the picture plane) but the main subject here is the golden evening light reflected on the wall. It is central to the composition and Ancher builds the paint up on the canvas until the light “becomes a tactile object” as Treanor puts it. A detail of the painting is seen below.

What I liked about this exhibit is that it is broken up into thematic spaces based on the interests of the Skagen artist colony and not chronologically. Ancher’s work is mixed in with her male contemporaries, putting her work in context and showing that she is not only equally as talented but an important contributor to the movement. She is working in relation to her peers and in and out of doors to follow the light. They are all depicting their family, neighbors, domestic interiors, and beach scenes; first with heroic large-scale depictions of local fisherman then with the leisurely activity of the afternoon stroll.

One section of the exhibit is dedicated solely to the idea that Ancher was innovative in her own right, exploring light as form and color, completely detaching it from context. She goes as far as to “make a composition with light [as] color and form” in Light on the wall in the blue room, ca. 1890. You can see her brushstrokes and exploration, the subject getting her full attention. While her male counterparts are busy depicting monumental paintings of fishermen and portraits of their wives, I can see Anna in her studio obsessing over what she sees and what is unseen - the evidence of molecular life only noticeable by the detection of brightness in a room, how emptiness is full of color. She takes the interior scene and strips it of human interaction, then of its structural components, thus liberating her subject and setting her beloved light a world apart. 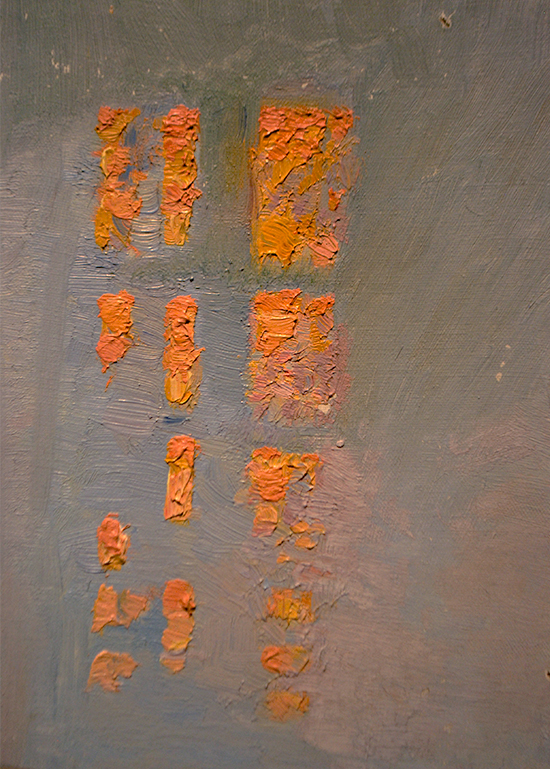