“Are there any notable VIPs you’d like us to shoot?” Two male photographers were standing near me talking to the stage manager. She was in charge of making sure things ran smoothly and on time backstage. She wore her dark hair sleeked back in a low bun, bright red lipstick, and head to toe black. Many of the photographers backstage were men. Most looked to be in their mid-thirties to mid-fifties and they had the grungy-fashionable-artist thing down to a science.

Their photography equipment ranged widely and was as personalized as each of their tattoos, piercings and beards. Some had zoom lenses, others specially rigged homemade flashes, and some were following around TV hosts.

Two and a half hours before the show the models were starting hair and makeup. There are generally around 40 models per show (one had 200 (!) and others only 10) and each one was assigned to a hairdresser, makeup artist, and dresser. The teams worked quickly and efficiently to get the models ready. Everyone woke up by 4am for the 9am runway show. The models ate bits of breakfast, drank coffee, and played on their phones while being transformed.

Two hours before the show press was admitted behind the scenes for interviews with the designer(s) and a glimpse of hair and makeup. The tent began to resemble controlled chaos as editors, assistants, and managers rushed back and forth and photographers swarmed the already crowded beauty zone. Constant chatter and camera flashes distracted my eyes and ears around the room. It was hard to focus on one person for too long.

Thirty minutes before the show the models were whisked away to get changed with their assigned dresser, who ensured their ensemble met all the designers’ specifications. The entire morning was energized with music pumping through the speakers. The models were lined up behind the runway in order and bounced from foot to foot waiting to make their debut. I wasn’t sure where I was supposed to stand or what I was admitted to do, but somehow quietly made my way to the perfect spot where I could see the models just as they were going out onto the runway. I wondered what went through their heads as they prepared themselves to walk. Then the lights turned off, the music started, and the spotlights flashed. The first girl stepped out, turned, and kicked off Fashion Week. As each model returned backstage, they quickly changed to another outfit or lined up for the finale. 10 minutes after it started, the show was over. Celebration was saved for the very last moment. Everyone backstage clapped with self-congratulation for a flawless job well done. And just like that, it was on to the next.

The chaos consumed me as I tried my best to be a fly on the wall and just take it all in. I never attended a fashion show, let alone had the courage to walk past Mercedes Benz Fashion Week, and now I was backstage at the first show on opening day. 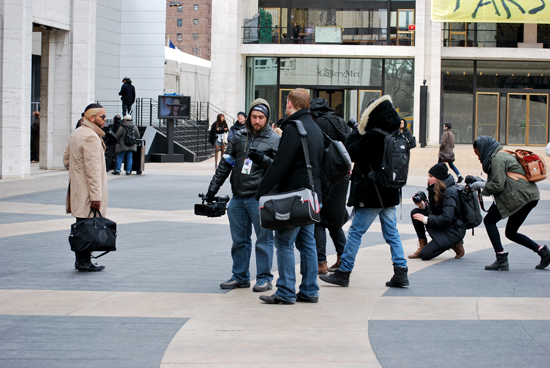 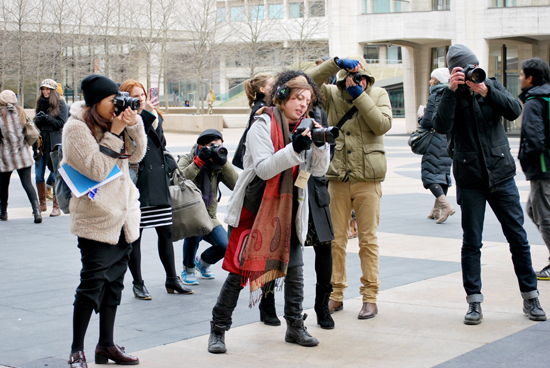 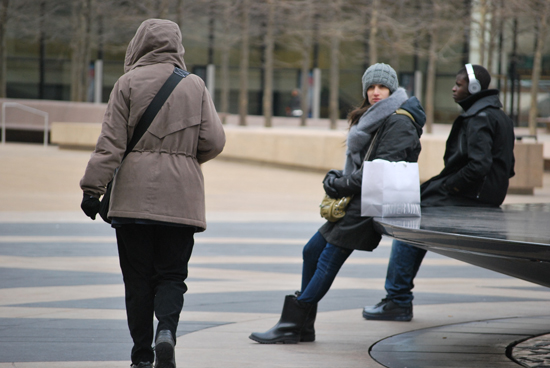 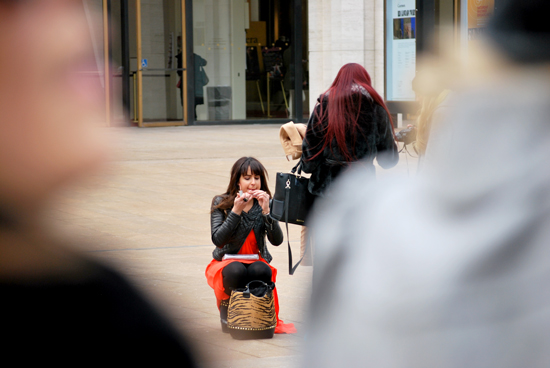 Two months earlier I was flipping through Vogue and decided enough was enough. It was now or never, I needed to do everything I could to get to New York City and attend a fashion show. It was a lifelong dream. One of those bucket list items you make when you are 12 years old while flipping through your first Vogue, you are captivated with a powerful woman dressed in a white YSL pantsuit. The urge was so strong that I could think of little else.

A few of my friends go to Fashion Week regularly and tried to give me some tips on how to go. But it was generally a blind effort on my part, emailing many, many people and applying for press credentials. It was no from every angle. It was too late. Most people made their fashion week arrangements before Christmas and by mid-January the press boxes were full, credentials denied, and no after no after no. I booked a bus ticket anyways, hoping to be a part of the scene and maybe get some street style pictures for the blog. I planned on going up Friday morning and staying through Monday.

Then, on Wednesday afternoon at 4:02 pm I received an email with the subject “BACKSTAGE CONFIRMATION: Nickolas K, Noon by Noor.” I couldn’t believe my eyes! My heart started racing and adrenalin rushed through my veins. Nickolas K was at 9am the next morning, with backstage access starting at 7am. I started panicking, I had hours to book a train, find a place to stay, and pack my bags. Thanks to Gman’s help, three hours later I was sitting on a train, camera in tow, filled with anticipation. 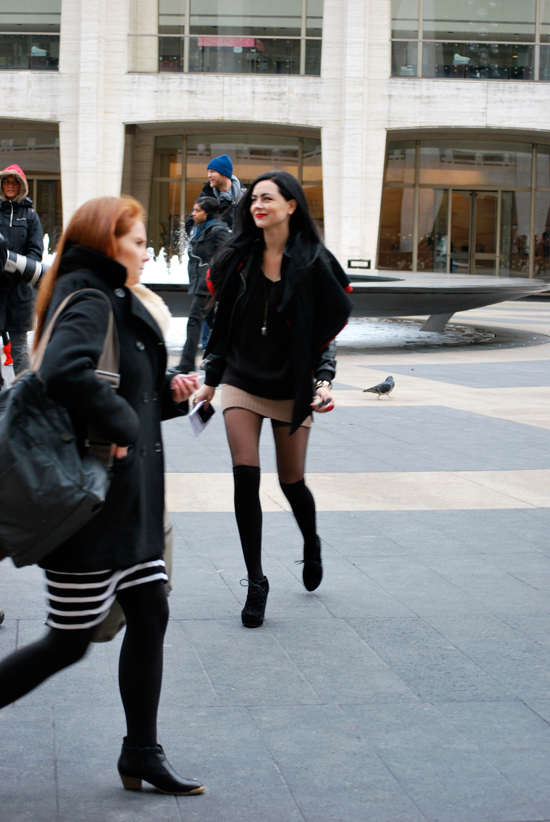 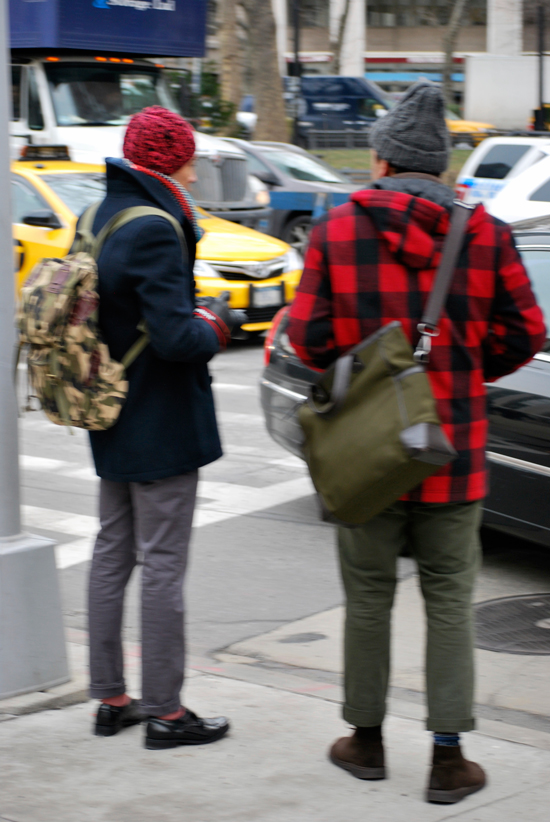 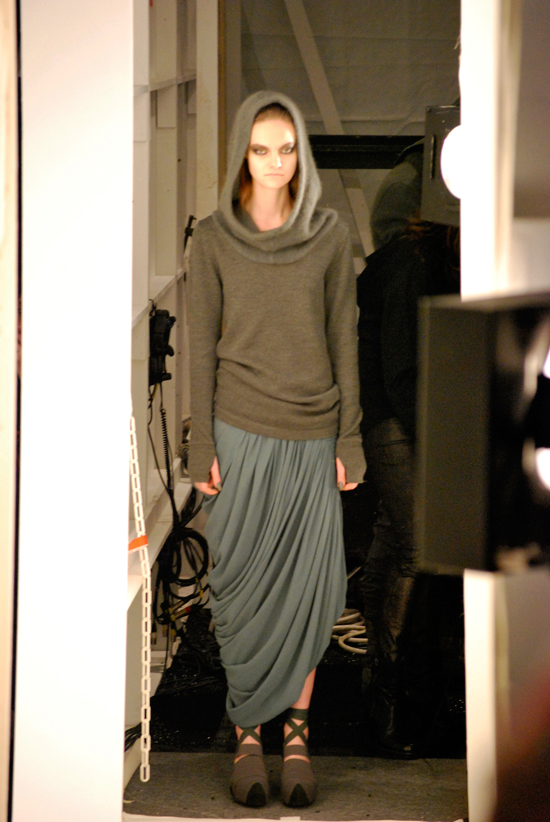 Before a fashion show, the stylish people poured into the tents, after making their way through frenzy of photographers. For the early shows, they too had been up in the wee hours of the morning to get ready. People joke about “#fashionweekproblems” but its really true! Each show is an emotionally and mentally stimulating rush of inspiration lasting about 10 minutes. If you don’t have a ticket, the waiting in line for each one is exhausting. Your mind races while you wait - Will we get into the show? What will it be like? Who will be there? Will my camera’s battery last? How does my hair look? Once you do get tickets and step inside, the important fashion industry people are already there, settling themselves into place and probably getting their picture taken. Then the lights go down, the music starts, and the first model steps out to the middle of the runway and makes her way towards the clamoring pit of photographers. Before you can fully take her in, the next one comes out, then another, and if you look to long or not long enough you miss it. Throughout the day you go from show to show without much regard for food or sitting until you suddenly realize eight hours in how incredible starving you are. And how much your feet hurt from heels (I imagine. I planned ahead and wore comfortable boots). 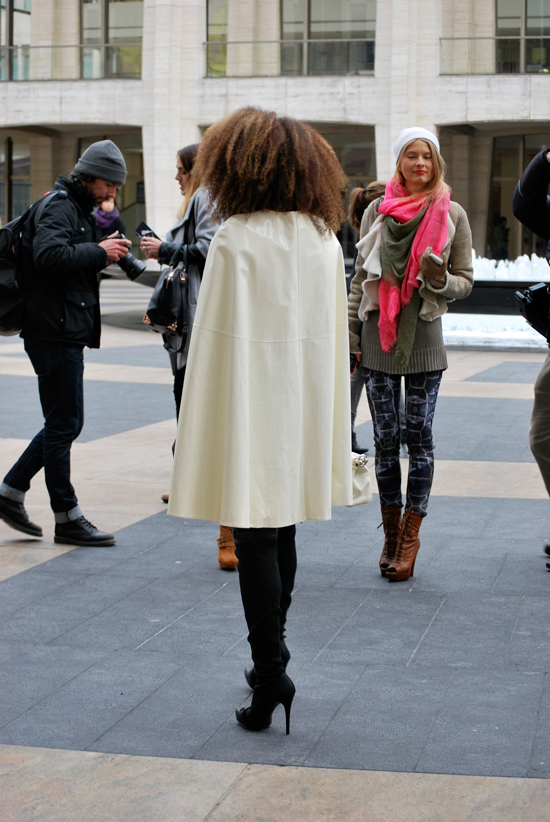 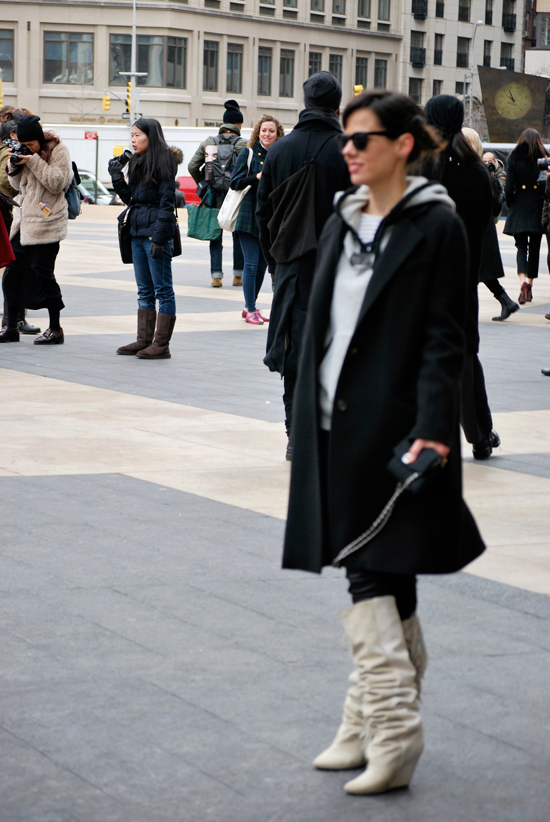 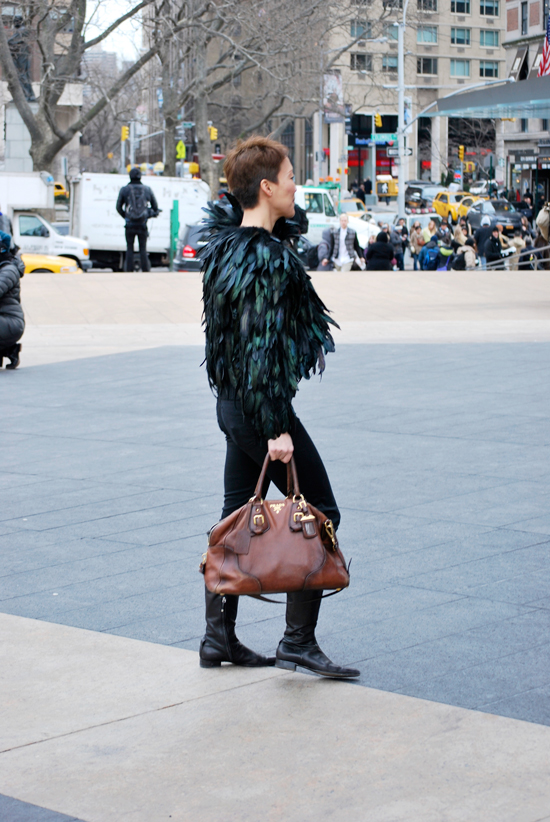 A runway presentation is something we have all seen before through the magic of TV and Internet. I used to watch Video Fashion into the wee hours of the night. Back when the production budget was a camera on a tripod at the end of the catwalk. Afterwards they would go backstage and interview the designers and celebrities. How could you not want to be a part of something that exciting?

But being there in person is different. Its something you haven’t seen before and not just because the presentation is new. Each one has a different vibe, different air, ambiance, sounds, and crowd (I’m terrible at spotting famous people, so I really couldn’t tell you who was there). The fabrics and textures blew my mind, laser cut leather that looked like lace on evening dresses at Tadashi Shoji, carefully draped jersey at Nickolas K, and wool beanies with silk dresses at Candela. Woven textiles, cotton, nylon, lace, wool, and cashmere all saturated with such vibrant colors that under the weight of being soaked in dye, the fabric looked like it would slip off the model and into a puddle on the ground. It reignited my passion for clothes in a very real way.

Fashion is bigger to me than the next big thing. It’s bigger than pointed toe shoes versus round toe or blazers versus denim jackets. Those are trends. Those can be fun. But fashion is style. Fashion is a passionate creative process that pushes the bounds of what we can do with technology and how we dress our bodies. It says something about our culture and it is very tangible. I felt like I belonged in those tents. I felt peaceful. I felt the weight of a life long dream lifted from my soul, making room for more dreams to be realized. 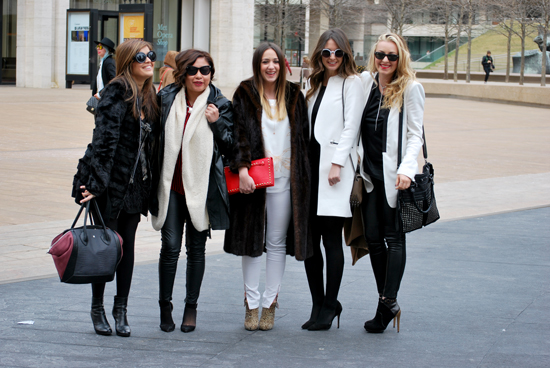