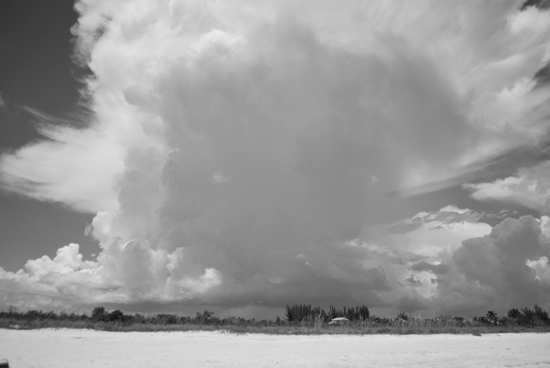 I smelled the rain coming as a bead of sweat gathered enough momentum to drip down the side of my face. I sat outside slouched in a patio chair with my feet propped up on the one next to me. The air was still. So still that if it weren’t for the dripping sweat I would have mistaken the stillness of the water in the swimming pool for a tiny frozen lake. I looked out over the screened in patio, past the pool and into the yard beyond the screen. Not a blade of grass moved. I thought it was all make believe until two cardinals suddenly broke the stillness and flew away. Other birds followed their lead - the last to leave before the rain started to fall. I scanned the area for other movement and saw the front of the storm quickly approaching in the near distance.

Before a Florida thunderstorm begins to rain, it smells. It’s a damp scent, different than mold, wet clothes, or wet dogs. It’s fresh - the freshness of newly formed rain clouds. But it’s more than fresh; it’s also the smell of tree bark, freshly tilled soil, and rainwater. This particular scent is what I imagine the air to smell like when I look out the window in an airplane mixed with what it is like to be in the wilderness first thing in the morning.

It’s a comforting scent to a girl who grew up in Florida. As a child, the smell meant you had to abandon that game of basketball and go inside. It meant that its time to get out of the pool or leave the beach. It meant that we had to play indoors for an hour every afternoon from May to September. That hour was a welcome break from the escalating heat and humidity that was building all day.

Besides the scent, in Florida you can see the afternoon thunderstorms coming. Their clouds billow up as they gain momentum over flat grasslands and swamplands. The clouds get darker and darker and start to swirl as they visibly move forward.

The rain will come slowly at first. Soft drops here and there ting the metal cage of the screened in patio I’m sitting on. Then it starts pouring and you can’t see through the rain. Sometimes, so much rain will fall in such a short amount of time that flash flooding is common in some areas every afternoon. The rain comes predictably at the same time every afternoon. So predictably that people plan their afternoon activities around it. You don’t need to carry an umbrella.

Floridian children are taught a game about how to tell how far away a storm is. Once you see a flash of lightening you start counting, “One one thousand, two one thousand, three one thousand,” and so on until you hear the rumbling thunder. The amount of “one thousands” between the lightening and thunder will determine the distance of the storm to you in miles.

As the rain gets heavier the cracks of thunder get so loud and so deep that they reverberate through your body as if you were standing next to a speaker at a club. It’s the same feeling as the bass of the music through your heart and breath. I count as the lightening pops and it nearly lulls me to sleep. Suddenly my hair stands on end as lightening strikes almost directly on the other side of the fence. I can barely count “one one th—“ when the sound of thunder almost took my breath away. If this wasn’t such a normal experience for me growing up, I would be terrified. I would be hiding behind the bed, like the dog. Instead, I’m sitting with my in-laws and we speculate about how someone from a drier climate might be freaked out by the amount of rain and thunder.

As a little girl, I would sit with my dad and watch the storms. As soon as the smell of the rain touched his nostrils he would grab a beer, pull the garage door open by a manual handle, and put his plastic chair on the edge of the smoothly poured concrete. The mist from clashing raindrops would moisten our skin as we sat on the edge of our safe shelter. Our little spaniel dog, Lady, would loyally accompany us, not moving from my dad’s side the entire storm. Although she was afraid of the thunder, I’m guessing she liked the smell of the rain more because while she sat there she would close her eyes and sniff the air as if she was intoxicated by the scent. He would sit there quietly and watch the storm go by without reading, talking, or distracting himself in any way. When I would join him, I felt like I was in on a secret.

During the strongest part of the storm, the rain clashes with itself and onto every object in its path. The sound is a constant hissing that calms ones nerves, though it seems like it would be the opposite. The thunder rolls into a crescendo, driving the rhythm of the raindrops. At this point he rain is so loud that you can’t hear someone talking only a foot away. Then suddenly, it’s over.

I’m stirred by the sound of Gman’s voice, “Sweetie, we’re going to the store. Did you want to go with us?” I must have dozed off while counting my “one thousands”. I got up as he talked and wiped the misty raindrops from my legs, arms, and face. As quickly as the storm arrived, it was gone. It left the colors of my surroundings a deeper and brighter hue than when I fell asleep. It looked like I lived in an oil painting. I walked inside, the birds returned to the feeder, and the smell of the rain folded back into my childhood memory.
Posted by Jamie at 5:14 PM