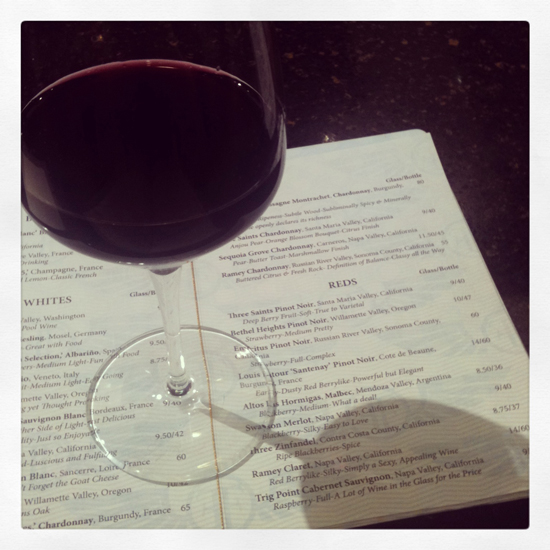 While traveling, I often find myself having a glass of wine at an airport wine bar in a city I've just become familiar with. On one of my trips I had to wait several hours for my friend's flight to arrive, so I decided to write about my experience as it was happening. In order to protect the people employed at this particular bar, I have not mentioned which airport or the name of the bar.

This is the unedited edition, and a little glimpse into my mind...


The menu describes the Alots Las Hormigas, Malbec from Mendoza Valley Argentina as “Blackberry-Medium-What a deal!” and charges a reasonable price, as the description announces, at $8.50 a glass.

I’m not sure what I was expecting besides blackberry, medium, what a deal. Surely I was just appreciative that there was a wine bar open on a Thursday at 2pm. Then again I was at the airport and such bars are usually open even in the wee hours on a Monday morning.

My fellow bar companions spread themselves out almost evenly at every other seat. Couples or friends sitting next to each other and strangers with at least one empty seat between. Most of them are middle-aged single women drinking flutes of something bubbly. All with noses buried in their iPhones or books and none interact with each other as if they have no peripheral vision. There are two men next to me –four empty seats between us - discussing the labors of their daily jobs. I keep hoping they will gossip but they strategize instead. Sometimes they talk about the weather or sports. They are in their 40s. They ask to “settle up” when they want their bill. Two women on my other side are also sitting together and equidistant from me as the men. They ordered red wine and no food. They sit facing towards each other, talk slowly and don’t make that much eye contact. I can’t tell if they are tired, not that close or forced to be together. Maybe they’re sisters, maybe they’re gossiping.

The airport wine bar I’m bellied up to is located in the main terminal of the airport. It is dead center in the middle and open to passers-by, which is how I estimate they get most of their business. It is an alternative to waiting at Starbucks. People are caught one by one, as if by a fisherman’s hook, as they meander by.

There are three men manning the bar. One, flamboyantly gay, blond and in his 20s, is in charge of the food. After the rush leaves he wipes his forehead like a damsel from the civil war and says, “all that food!” He comments to his co-worker who is a middle-aged man, slightly out of shape. He wears a button up and khakis, versus the other two who are in all black with fake pilot epaulettes on their shoulders. I assumed he was the manager when I approached the bar. He seemed nervous to talk to me and had to ask me what my order was several times while clumsily fumbling with the computer, which was in clear view. He seemed to lack the memory and confidence of a bartender. Or at least the ones I’m used to dealing with. Lucky for him, I didn’t mind, I wasn’t in a hurry.

He tried to flirt with the female customers, not in an inappropriate way, just friendly and slightly nervous. The third bartender seemed to know his way around the most of the three. He was also in his late 20s, maybe early 30s and blond. He efficiently cleaned the back of bar while taking orders and drying wine glasses with a towel. I was curious to know what he thought about this out in the open set up and his colleagues. These three men seemed to get along, but also seemed unlikely to interact as friends in any other point in their life and it made me miss having co-workers.

During the lull between rushes – when I ran the front of shop for a pizza place – we would flirt and gossip as we cleaned the place and started preparing for the next rush. We had the convenience of privacy so that if customers were assholes or we ran into someone we didn’t mean to see (read: ex-lovers) we could rant about it afterwards without their knowledge. Most kitchen staff has this privilege. As I sat and ate my salad rushes came and went. The three men quietly gossiped as they did their between-rush chores. I daydreamed about the wild variety of customers they might serve on a random Thursday afternoon. Did they have regulars? Did they care? Did they have server jobs somewhere else?

The Calma Tempranillo/Graciano from Rioja Spain was described as “Red berries-roses-earthy spices-vanilla and cocoa-smooooth” also at $8.50 a glass. No wonder people think winos are assholes. It sounds like we just throw random words at bottles. “I love lamp” would have made just as much sense. These descriptions read as if you’ve already had the bottle then go about formulating a judgment.

The two wines listed after the Calma are JC Vizcarra Tempranillo, Ribero de Duero, Spain and Monte Bernardi “Retromarcia” Sangeovese, Tuscany Italy. They are described as, respectively, “Dried Cherry, Leather, Perfect for Food” and “Dried Rasberry-Tobacco-Dry” and after that Pertimali Sangiovese/Cabernet, Tuscany Italy “Dried Blackberry-Dusty-Dry” I assume these all taste like what I’m already drinking and wonder if “dusty” and “dry” would be a good combination or if I would need a glass of water and a margarita after drinking it.

A new couple sits down where the two men sat previously. They are boisterous and “knowledgeable”. They are in their 60s and three hours early for their flight. They decide to park it and make friends with the nervous one, as I now call him in my mind. They introduce themselves to him, and he warms up, even cracking a joke. His name is Tony. He also works at Carrabba’s (which is across the corridor) and I wonder if the others do too. He reveals to them that he has been working at the bar since 8am (I told you airport bars open early!) and was so tired. He said this in an apology for forgetting their order. He eventually got it WAY right when they wanted to order pasta from the restaurant and he took their order and had it served to them at the wine bar. A service I’m sure he went above and beyond to do.

The couple gave Tony very personal information. They assumed he was their friend and they monopolized his time. They will be here for at least two more hours and I suddenly want to tip Tony more than 20%.

After listening to them talk for a few minutes. The man confirms he is 65. Tony is 42. The man assumes Tony is a sociable person and now they are BEST friends.

A new man sits down and also befriends Tony. I wonder if I am unapproachable and sip my second glass. The older man says, “this reminds me of a bar in New York” to the new man. The new man feigns recognition.

My friend texts me a link to @pornforwomen’s instagram feed and a joke about John Hamm. I end up laughing out loud.

Tony’s shift is over and he is relieved of his new friends. My friends arrive and I close my tab.