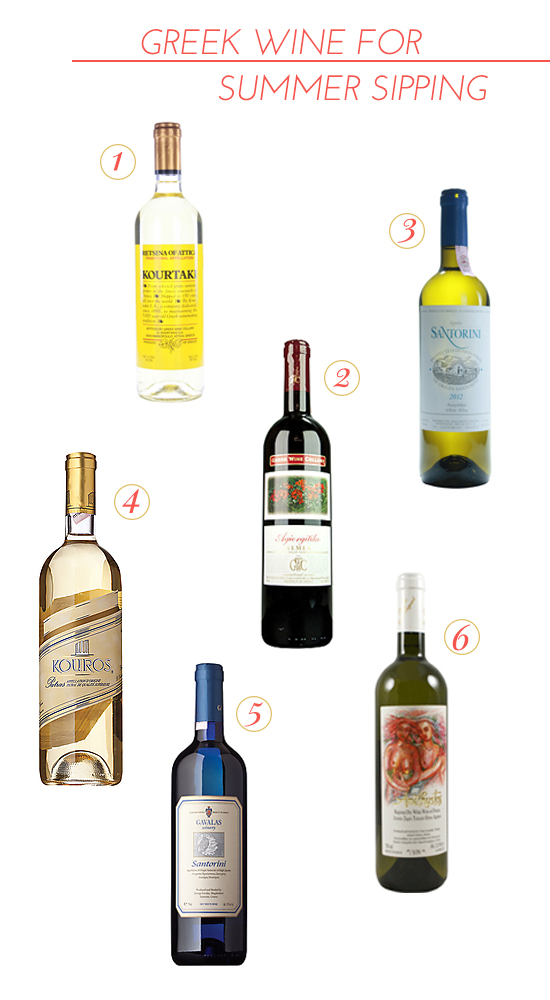 Back in May I was invited to a fabulous wine event at Zatayna sponsored by the Greek Embassy. It included a wine tasting of over 40 Greek wines followed by a three course lunch paired with four wines in each course. I hadn't really tried Greek wine before but after the event I definitely feel comfortable ordering it at a restaurant or picking one to pair with outdoor summer grilling.

Some of the wines I tried tasted like the salty Aegean Sea and I imagined drinking them on a white washed porch with grilled octopus (because I eat that now). I wouldn't understand a single word of Greek spoken all around me, but I wouldn't care because the sun would be warming my skin and the sound of the sea would be soothing my soul.

Here's an intro to Greek wine and a round up of my favorites for summer sipping.

Greek wine got an early start in the ancient world as early as 2500 BC. You can see wine represented in Greek art, architecture, archeological evidence, writings, and philosophical writings from that time, as you're probably familiar with. But modern Greek wine production is little related to the ancient days, besides the varieties of grapes, and didn't gain much commercial traction until the 1980s. Over the last century this was mostly due to political unrest following WWII and the Greek Civil War (1946-49).

There are ten growing regions with over 300 indigenous types of wine to explore - this is not including cabernet sauvignon, sauvignon blanc, and other European grapes also grown in Greece. Some of my favorites from the event were the white wines Assyrtiko from Santorini, Moscofilero from Mantini, and Vidiano from Crete. The red wines generally weren't as good as the whites, but I really liked the Foundi Naoussa 2007 Xinomavro that was paired with a spit roasted lamb shoulder (I mean!!). Most of the wines were soft, crisp, fresh, and some were lemony. Perfect for pairing with regional seafood and small plates with piles of tzatziki.

*We didn't try a traditional retsina at the event, but I tried it at home. More notes on this regional specific wine next week!
Posted by Jamie at 7:00 AM