Tips to Travel By: Adventures of The Thirsty Cowboy 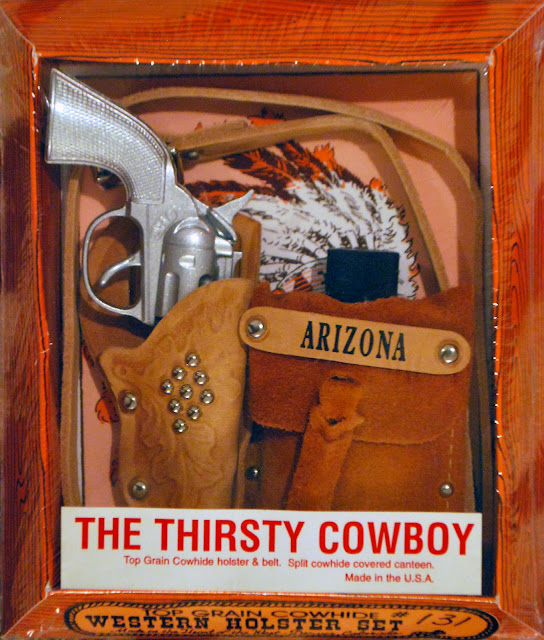 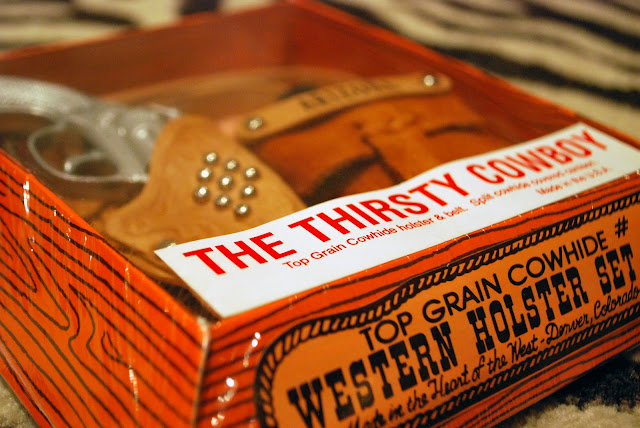 While I was in Sedona (story coming next week!) I was in a funny mood. I made the mistake of connecting to the outside world during my vacation (damn you iphone!). And then I decided the best way of handling my frustration was to have nachos and beers at 11am. Why not?

Then I was just plain silly walking around all the touristy shops simultaneous making fun of everything they stood for and making purchases. Gman was in need of a souvenir and I found the perfect thing: The Thirsty Cowboy. This holster set was in the 9 years old and younger section of a Western costume store. Wrapped in an orange box with brown faux wood graining and inside, a tiny toy pistol and flask with "Arizona" written on the fancy leather pouch. These goodies were strapped to a belt for your little tyke to use while pretending he was a belligerent drunk with a gun, I mean a cowboy. To top it off, the box doubles as a framed piece of art! Huge bonus! "Two in one box!" Advertised the back of the frame. What is the art you might ask? A stereotypical 3/4 view portrait of an Indian chief which you could hang on the wall. I had to buy it immediately. Present shopping complete!

After that I threw it in my suitcase. I completely forgot about it, even while packing, as it was in the outside pocket of my rolly bag. So you can imagine my surprise when I'm delayed in the airport security line on my way back home. I went through the scanner and seemed to be waiting for an unusual amount of time for my bag to go through the X-ray belt. Then I noticed that other passengers were being redirected to other security lines. What's the deal? They were inspecting my bag on the monitor. I saw supervisors rushing over. About six TSA agents crowded the monitor, pointing, talking, looking concerned. I still had no idea what the hold up was. The supervisor finally comes over to me and says, "M'am, is there any reason you would have a gun in your bag?" What? I racked my brain. Crap. The Thirsty Cowboy! I told him it was a gift for my, uh, nephew and he told me he had to call the police.

What seemed like an eternity (not even 10 minutes), the police came and finally got a look at the problem. They were very respectful of me and my bag (unusual) and I'm pretty sure I saw someone crack a smile when they took the little treasure out of my suitcase. They re-ran it through the X-ray machine and when it was confirmed that it nor I was a threat, they let me go on my way (and even keep it!).

I was surprised that a) the agents were actually doing a good job and b) that the whole situation was handled so discretely and respectfully. As embarrassed as I was that I, such a seasoned traveler, made such a stupid mistake, I'm glad to know that TSA really is useful and some people take their jobs seriously.

So what's the tip? If you travel with toy guns, check your bags.
Posted by Jamie at 7:00 AM