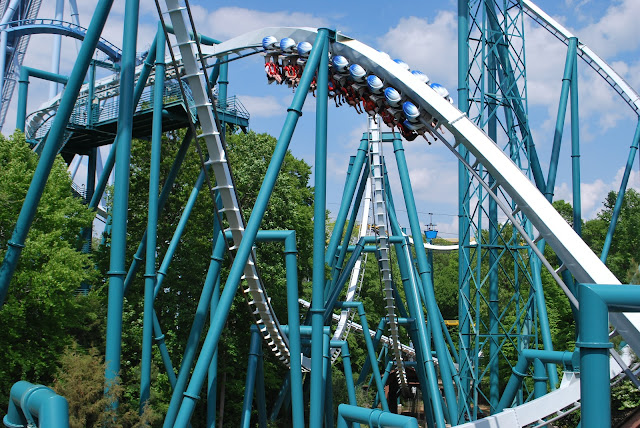 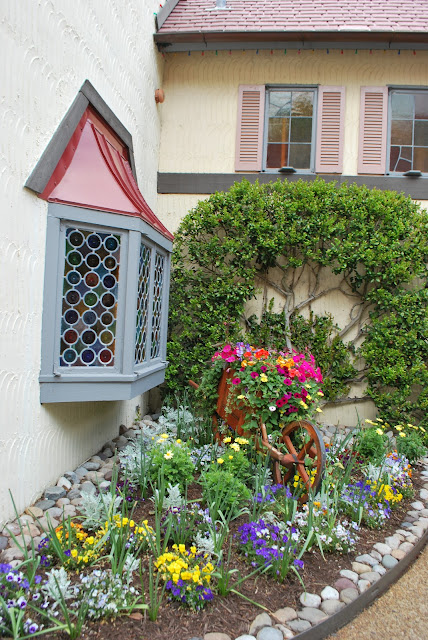 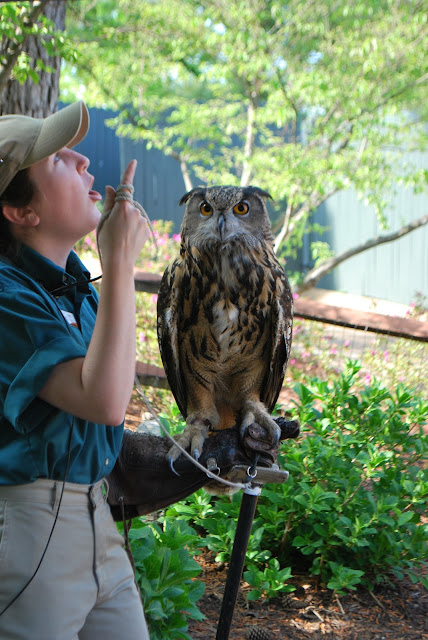 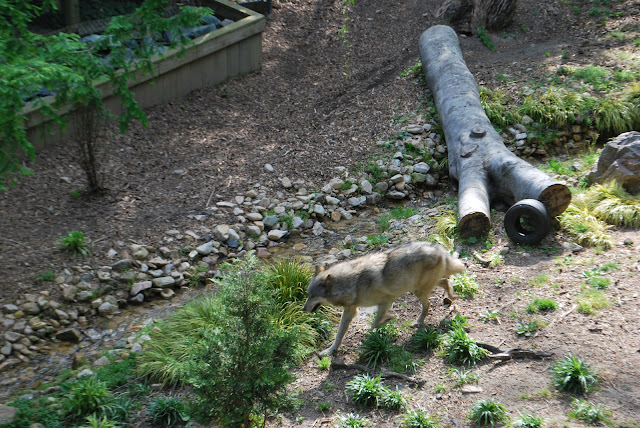 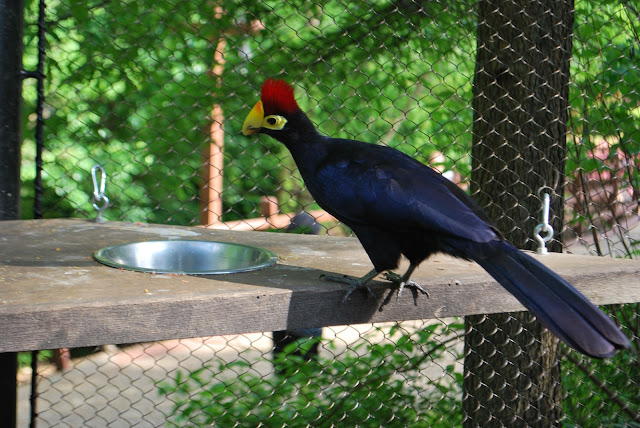 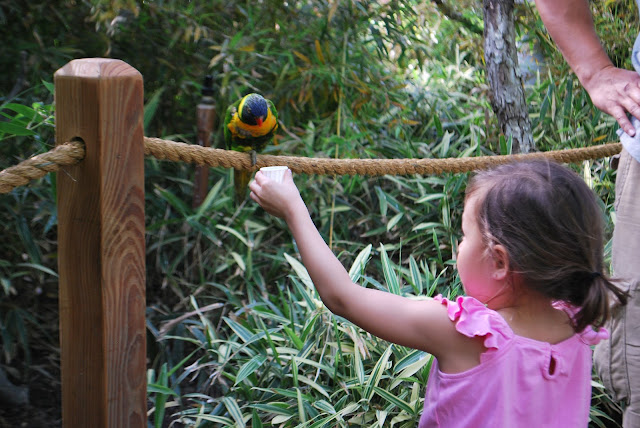 Friday afternoon I received an unusual midafternoon call from Gman. He asked me if I would like to go to Busch Gardens on Saturday. “The rental car is only $60 and we can go there and back in one day.” He paused as I tried to digest what he just offered. I quickly went over my agenda, to-do’s, and expectations for the weekend and more quickly than he could think of the next line to convince me, I said “Why the heck not, let’s do it.”


We realized two Bud Lights, a funnel cake, a plate of “authentic” German food, and a half-broken 3D ride in that this was our first trip to an amusement park together. It clearly isn’t something we’re big into but we needed a break and had a lot of fun trying something different. I’ll describe the pros and cons of my experience at the all American theme park but to start, a little bit about the place.


Busch Gardens is an amusement park owned by Anheuser-Busch. There are two locations the one we went to in Williamsburg, Virginia which is Europe themed and one in Tampa, Florida which is Africa themed. (I grew up going to the Tampa one and feel a strong preference for it so I compared them all day.) Busch Gardens is a great place for family bonding and a pretty good deal if you want to drop off your teenagers there for the day. 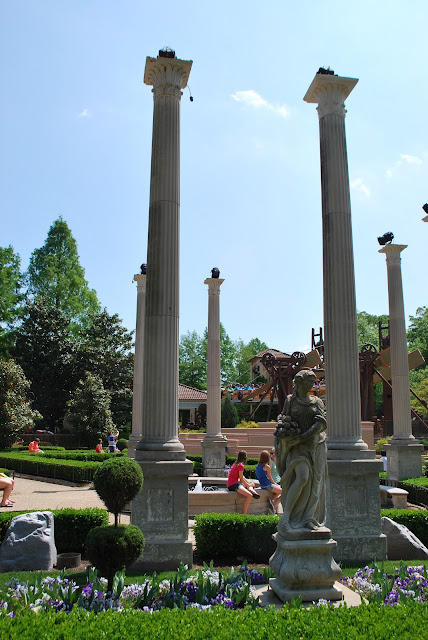 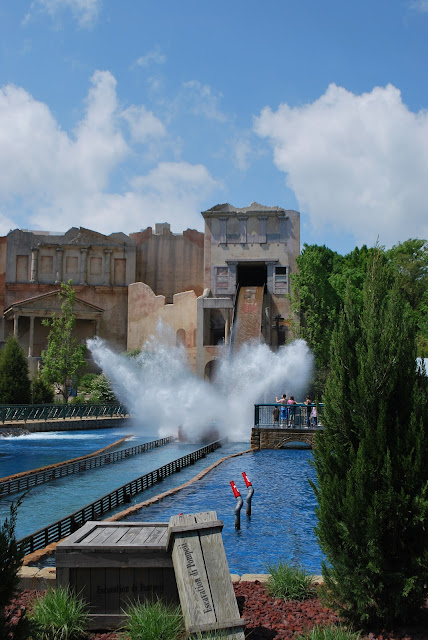 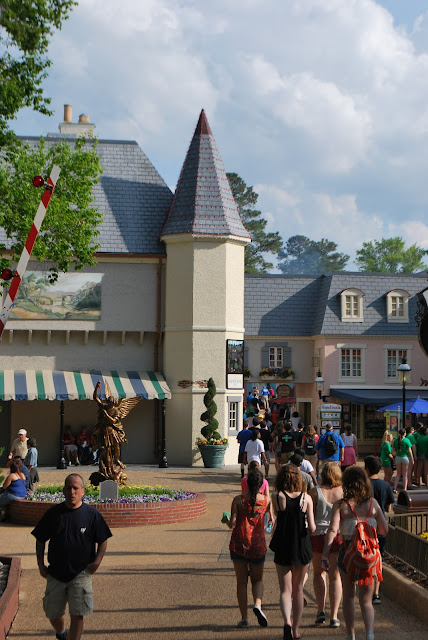 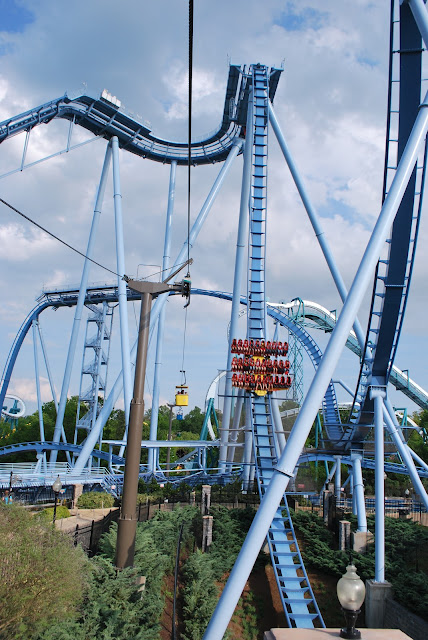 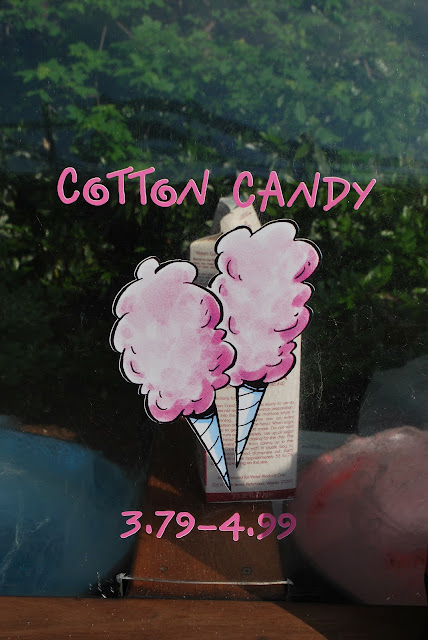 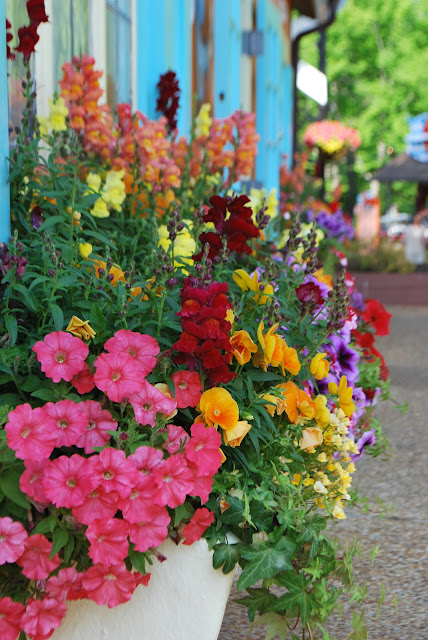 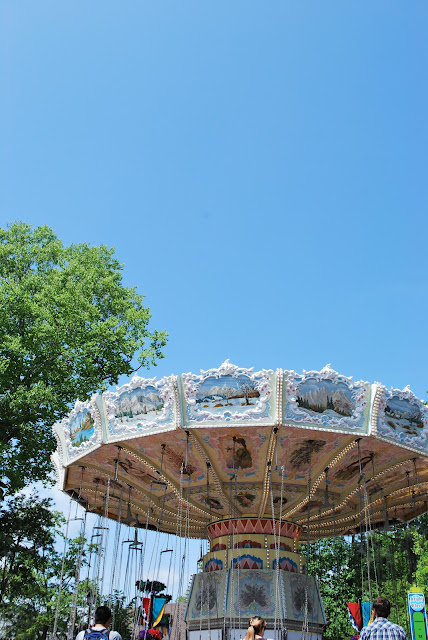 On to the pros. The best part is all the sh*t food one could possibly imagine – kettle corn, funnel cakes with ice cream, caramel, and whipped cream, cotton candy, turkey legs, and lots of beer – it’s like the fair sans the fried Twinkies. I tried almost everything too despite having some difficulty trying to squeeze in eating in between roller coasters without wanting to puke. I survived.


I like that amusement parks offer something for everyone and allow you to have exhilarating and slow moments throughout the day. We saw lots of animals including owls, horses, Bald Eagles, wolves, and birds (the one in Tampa has a safari!). The animals there were mostly rescued from accidents and very well taken care of. One of the owls we “met” usually lives about 15 years in the wild but could live up to 40 in captivity! Also he was huge and only weighed 5 lbs. The same sized Bald Eagle weighed almost 15 lbs. The owl was also distracted looking for squirrels while the handler talked to us.


There were a variety of rides from sky buckets to roller coasters and everything in between. When we were little my sister and I loved the log flume. I thought I also enjoyed roller coasters but the photographic evidence shows that I was in fact not having fun. My displeasure greatly amused Gman and he made me go on as many as possible.


The people watching was absolutely outstanding. I’m so glad I decided to wear with jean shorts that day because they were the choice du jour. I’ve never seen so many variations on the classic and on so many body types and ages. 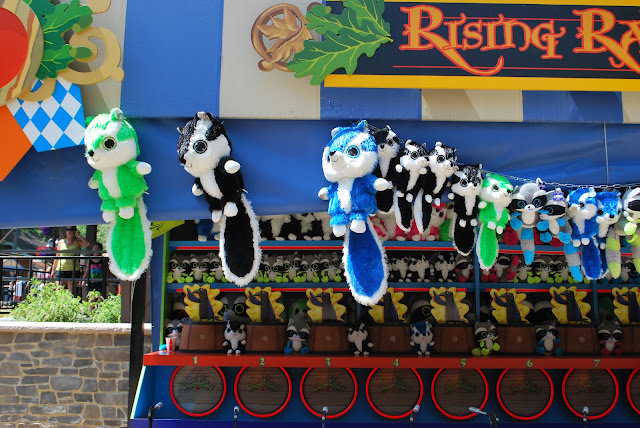 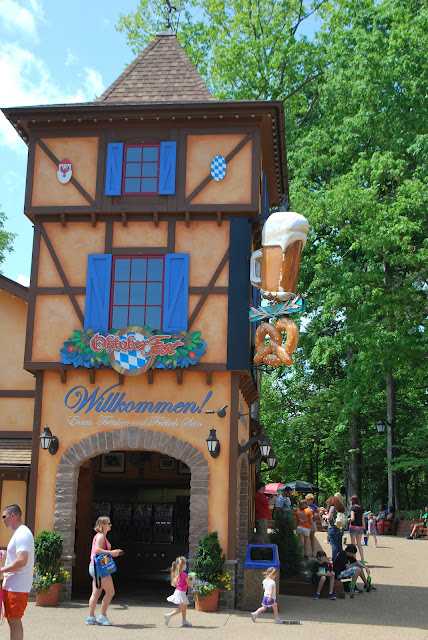 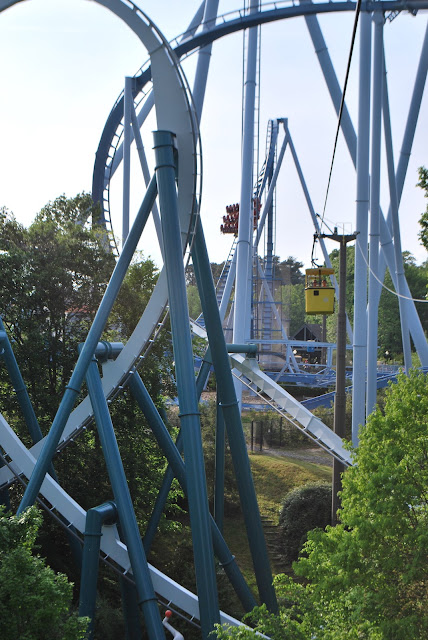 The cons. We were hoping that we beat tourist season but we didn’t count on the hordes of high school choir groups that descended on the place like locusts. Eventually their rowdiness grew on me and it was still less crowded than it could have been, so not too bad, right?
No, that wasn’t the worst of it. Gman and I decided on German food for lunch and so headed to Oktoberfest as soon as we got to the park. When we walked into Das Festhaus and I was immediately overwhelmed with a magical forest themed restaurant, seating 2,000, with mass produced food, and an all-singing all-dancing Broadway style musical extravaganza. The overly happy faces sang and danced to charming poppy music in the center of the room. Welcome to my hell.
I can’t stand musicals nor do I like themed restaurants, especially magical forest ones at themed countries in theme parks. Restaurants should be about the food. Period. I tried to leave and Gman begged me to stay because he was so hungry already. Luckily we just caught the end of the thing but I noticed people were lining up to meet the cast. What?! We ate in relative peace as we contemplated the meaning of this interpretation of German culture. 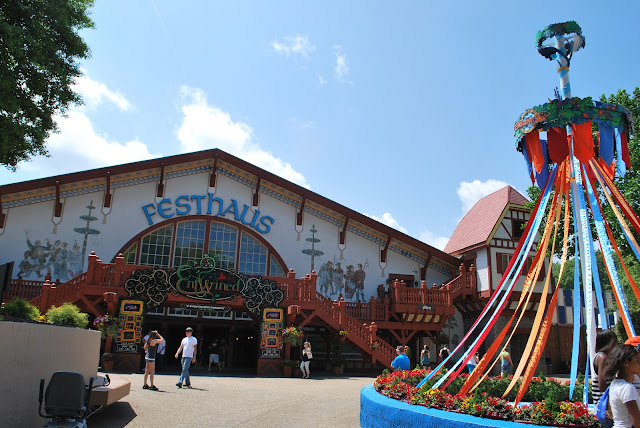 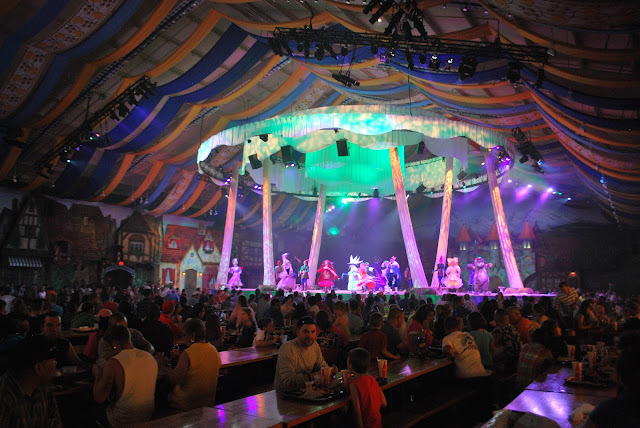 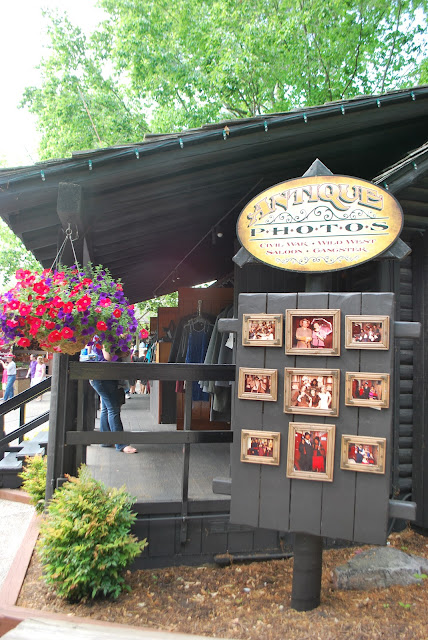 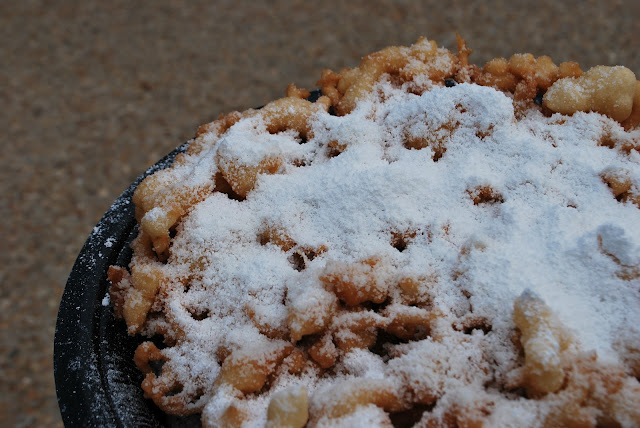 Allow me to quickly explain my annoyance towards sing-a-longs and these types of productions. I respect and appreciate live music and dance, don’t get me wrong. I cried my eyes out during the entire production of Wicked. Some people are truly talented.  However, in many cases their produced happiness reminds me of overly entertaining cheerleaders making bubbly faces at the camera. Their enthusiasm is forced and I lose faith in everyone buying into it.
I will say that I can see the need for such a break in the amusement park. Taking 30 minutes off our feet while sitting in air-conditioning was welcomed. In fact, I made Gman go to the less-smiley Celtic dancing production later that afternoon.
The weather was perfect – warm but not hot, slightly breezy, and sunny. Gman and I truly enjoyed our day together and felt like we did get away from it all. We had plenty of downtime to stroll through the park, look at flowers and animals, check people out, eat lots of food we shouldn’t, have a few thrills and get to know each other a little more.
So tell me, do you like amusement parks? What’s your favorite part or why don’t you like them?
Posted by Jamie at 8:18 AM