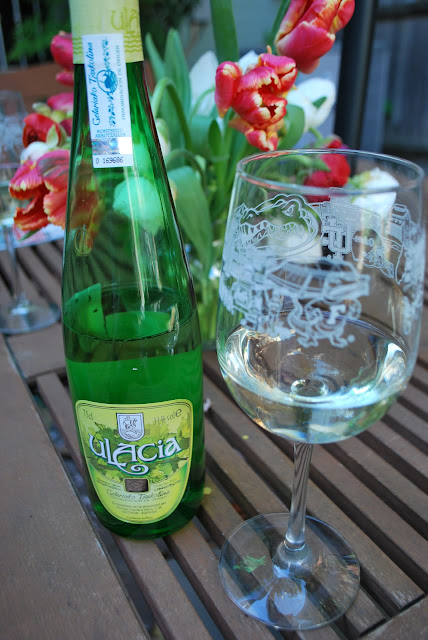 Ulacia, Txakoli, Espana 2010, $17.85 with the wine tasting discount
My rating for this bottle? I would drink a few glasses

For a special treat on Easter weekend Gman and I quietly drank a bottle of wine out in the garden. To spice it up, we decided to try the weekly Saturday wine tasting at A.M. Wine Shoppe. Proprietor Justin Abad was pouring and very knowledgeable about each bottle in his shop (and about wine in general). He friendly to boot.

The actual tasting was barely a sip. I was expecting a least a few sips so we could stand and chat as well as get to know the wine a little more. The good thing was that you received 15% off whichever wine was featured in the tasting. This one would have normally been over the $20 budget for this series but with the discount I was glad to be able to try something new.

I've never heard of a Txakoli before. It had a greenish tint to it and tasted very citrus-y, lots of lime and freshness. There was also a slight bubble to it which I really liked for a hot afternoon and with the plan of drinking it outside in the garden.

Txakoli is a Spanish wine made in Basque Country, which is in Northern Spain on the Atlantic. The region produces small quantities of wine and I felt like we were drinking one of Spain's best kept secrets. I bet when you visit the area this wine is served casually in almost every restaurant. It's probably something the locals are all too familiar with and we've never heard of it. It makes me want to go there and see what other secrets there are to discover!
Posted by Jamie at 8:46 AM

Email ThisBlogThis!Share to TwitterShare to FacebookShare to Pinterest
Labels: Wine