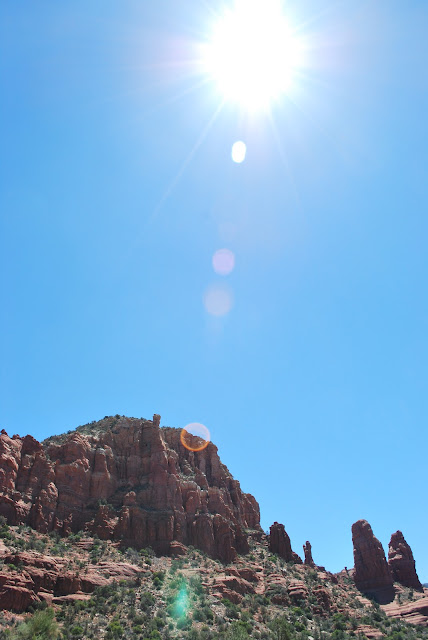 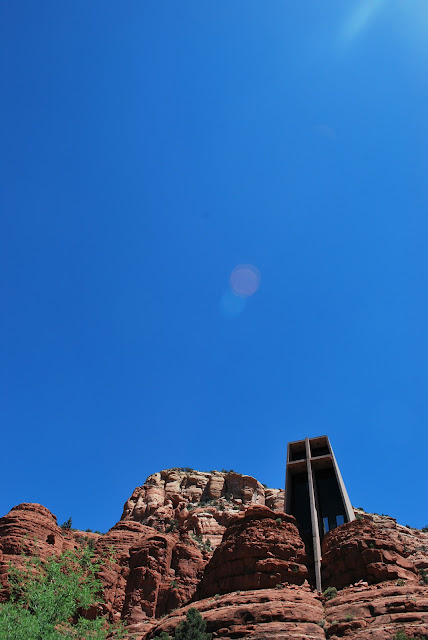 Alyse and I headed out on our Sedona adventure from Scottsdale on an early, already hot, morning in June. My little brain was full of expectations and anticipation. I’d never been to the American West before like this. Sure, I’ve watched a bunch of Spaghetti Westerns and I’ve seen the Grand Canyon (which was incredible) but I haven’t started driving in a direction and gotten lost in a vast open landscape. I wanted to see what the pioneers saw, how the natives lived, and to taste salty freshness a margarita when my body was sweaty, dusty, and sunburned, while I overlooked Thunder Mountain (it’s a real thing Disney fanatics!) and Chimney Rock. I wanted to experience euphoria. I wanted to experience one of these spiritual vortexes I’d been hearing about.

In addition to a Western fantasy, Sedona is a gallery goer's dream. Don’t expect the Chelsea circuit here. It’s a mix of locally crafted goods, anthropological treasures, tacky crap, and some decent fine art (I didn’t get a chance to check it out but have heard Tlaguepaque Arts & Crafts Village is the place to be/buy). I wanted to see it all, but first a side trip to Chapel of the Holy Cross. 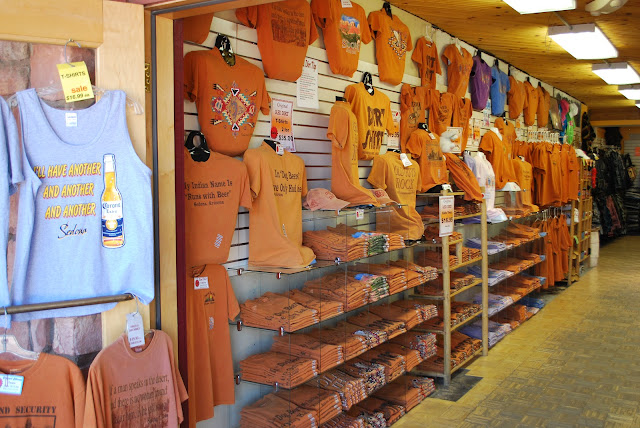 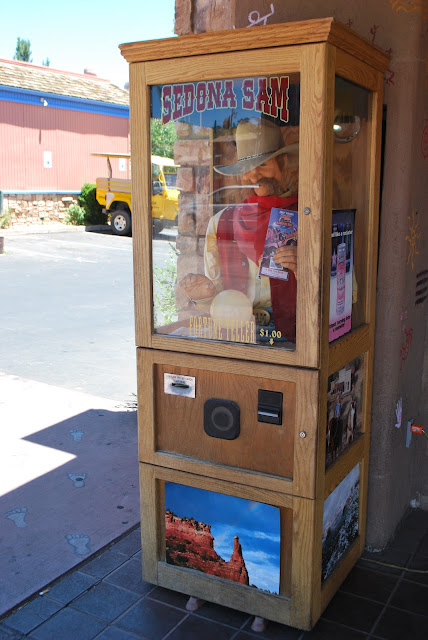 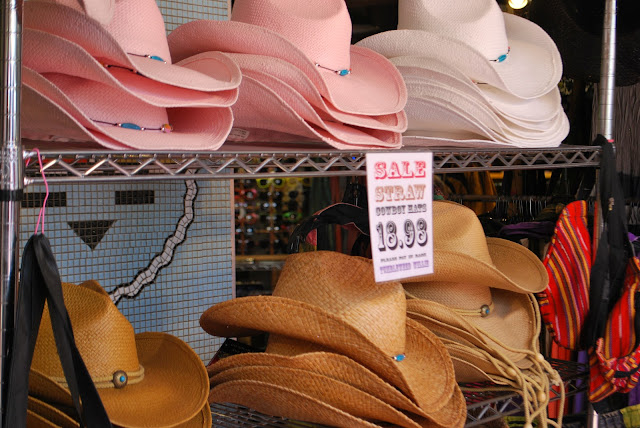 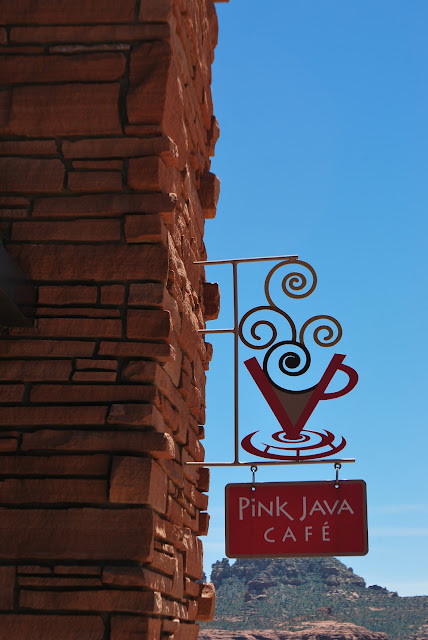 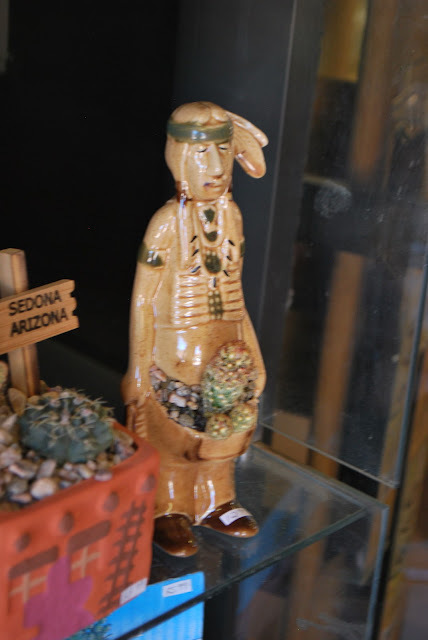 What are the chances that the Chapel of the Holy Cross was built right on top of a vortex! Kill two birds? The concrete chapel darts up above the landscape and is renowned for its daring 1950’s design. We were immediately impressed by the picturesque views, architecture of the chapel, and… the volume of tourists. So many people. Everywhere.

Generally speaking, a spiritual vortex is an experience unique to Sedona. People come to be healed by the swirling energies, which are like dirt devils but with spiritual rather than physical energy. Alyse and I each carried some emotional burdens, so we decided to give it a shot. It was hard to find a quiet spot but the information we read on vortexes said that a) they cover a lot of ground, so you could potentially have a moment sitting in your car in the parking lot b) everyone has a different experience, some stronger than others c) vortexes have different energies like masculine, feminine, stimulating, calming, etc. and d) sometimes using an object, like a crystal, can help channel the energy. We sat down in a pew and tried to pray. I didn’t quite get to the zoned out phase of meditation/prayer, but I did throw in a few good words for my family before deciding that this was a bust. Maybe the vortex moved. Can they do that?

Disappointed, we threw down a post-breakfast meal of nachos and Coronas before going out to conquer the art galleries. Then I forgot the map to the galleries in the car so we decided to wander around and just see what struck our fancy. This is when we joyously discovered The Thirsty Cowboy with whom you are already acquainted. 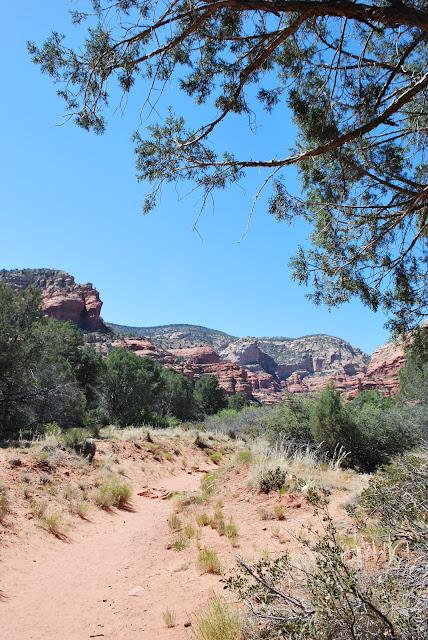 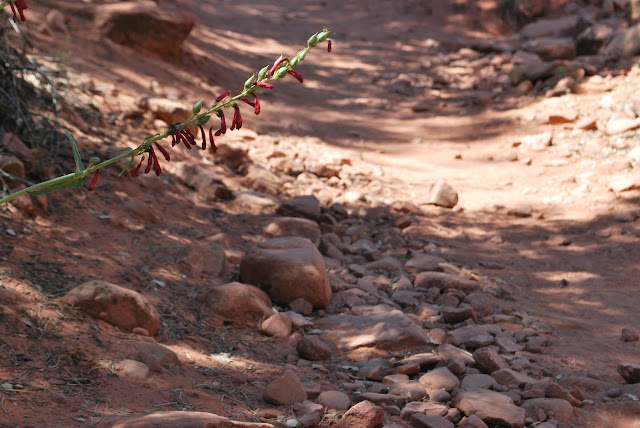 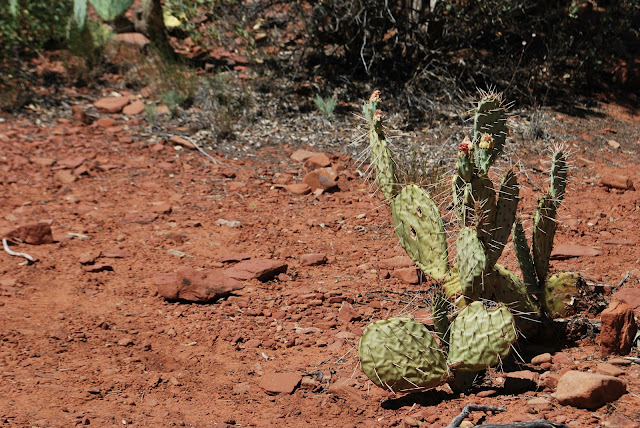 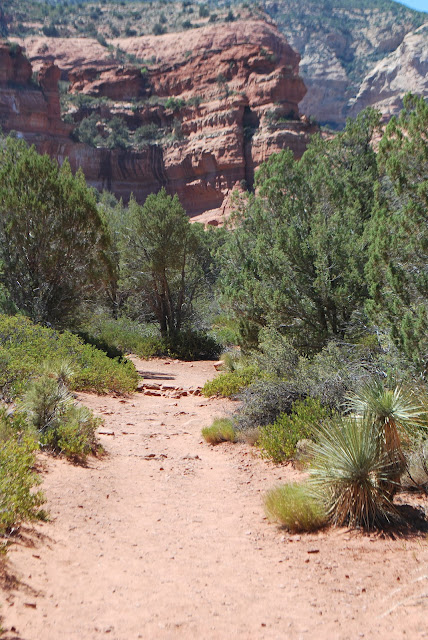 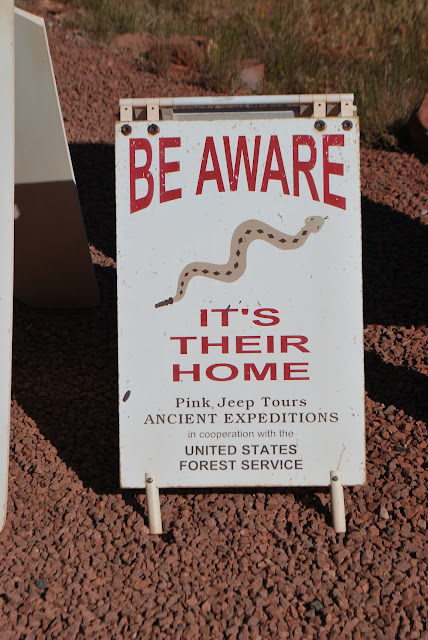 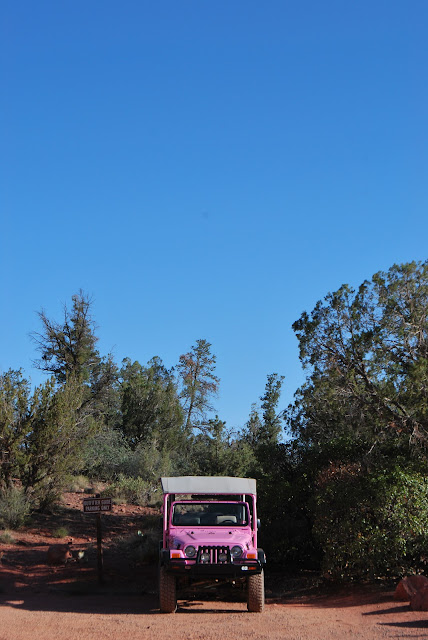 If you are visiting Sedona, the only touristy thing I recommend you make time for is the Pink Jeep Tours. You will curiously see them everywhere as you drive up HWY 179 and 89A. There are many tours to choose from depending on your adventurous spirit. We went with the educational tour of ancient ruins at the Honanki Heritage Site. Seeing as though this was the least exciting trip for families with children (learning!), we had our guide to ourselves. I enjoyed learning about the Sigaguan and their mysteriously industrious ways out here in this now remote location. The highlight was the graffiti, contemporary with the construction of the ruins until now, on the crumbling walls of the cave dwellings. I had some anxiety over a possible rattlesnake encounter but on the way back to town between the wind in my face and the way the light touched the landscape, I relaxed in a moment of happiness. 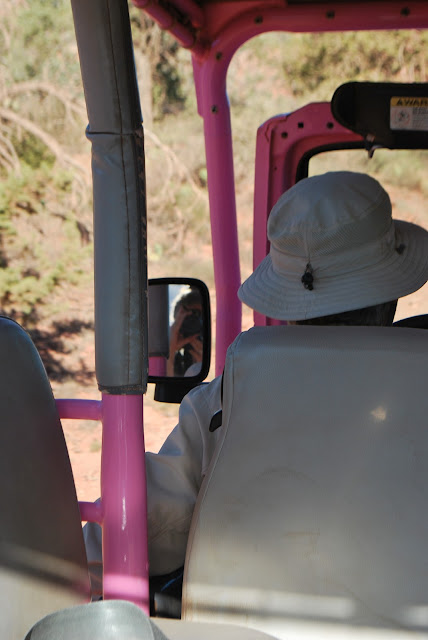 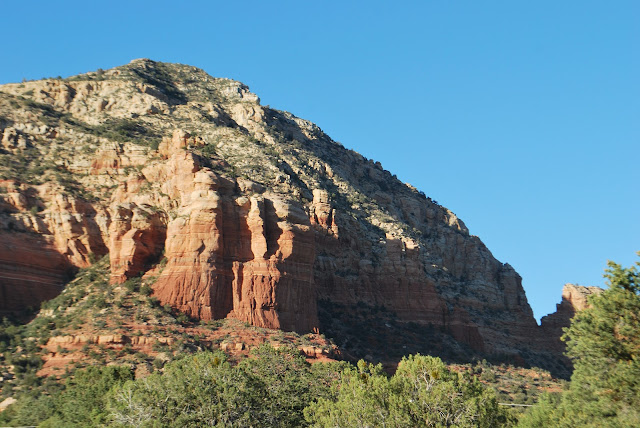 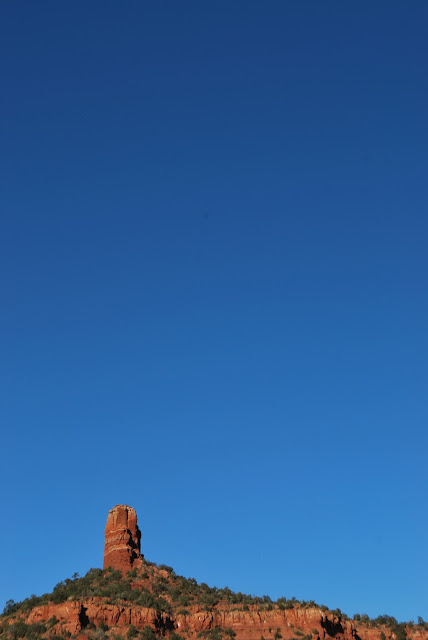 But I’m getting ahead of myself. My parents went to Sedona in March of 2011. I’m sure they told me they were going, but I didn’t realize they were there until I received a picture text from my Dad of himself standing proudly on Devil’s Bridge. Looking at it was both thrilling and terrifying. I felt like saying, “Wow! Amazing views! Impressive climb! What a tiny land bridge and a huge drop down!” while at the same time saying, “Get down from there! This isn’t funny.” So ever since I saw that picture, I had to go there. I wanted to take a picture like that and send it to him. Then bond over it.

Alyse reluctantly obliged to indulge my fantasy so we headed out for a quick jaunt in the desert before our Pink Jeep Tour. Unfortunately we misjudged just about, well, everything – how long it took to drive out to the trailhead, the blazing heat, the fact that you needed an off-roading vehicle to drive two miles on gravel and soft dirt to get to the real trailhead, how long it took to hike to Devil’s Bridge, and then to get back. We had a grand total of one hour and by the way the hardcore outdoorsy people with all of their gear stared at us in the parking lot, we decided to try something else.

Once on the substitute trail, we spent a grand total of 20 minutes basically running from photo op to photo op. This was for fear of being alone in nature, dying of thirst, being eaten by something, and to see as much as possible in our tiny time allotment. Also, we had no time to look for vortexes. 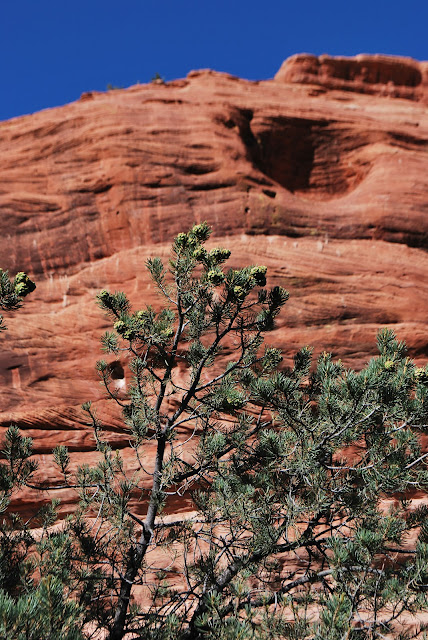 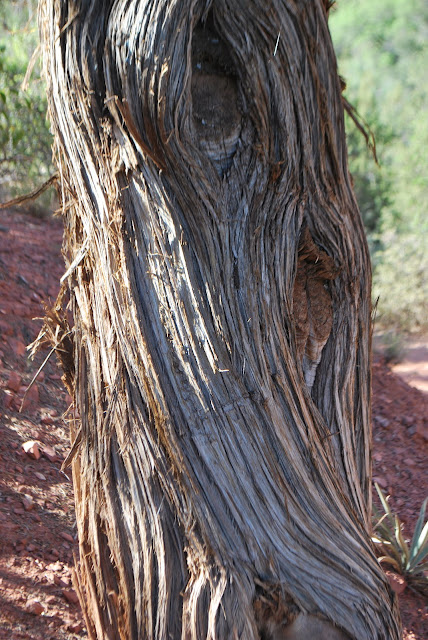 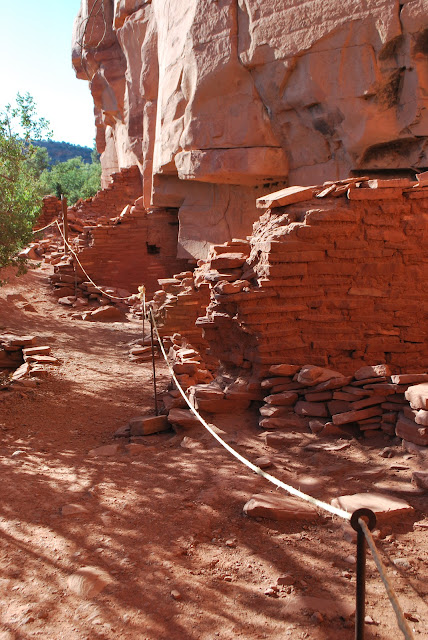 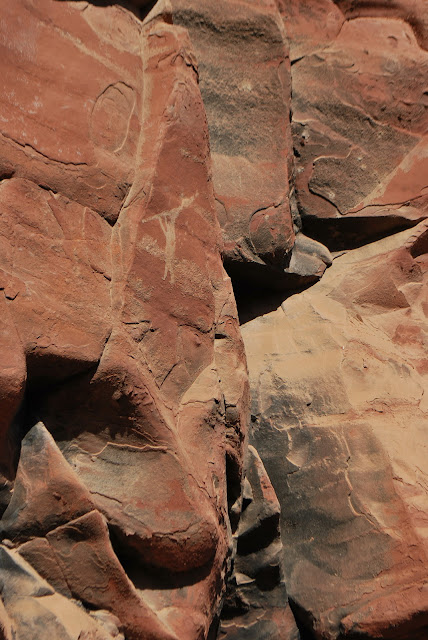 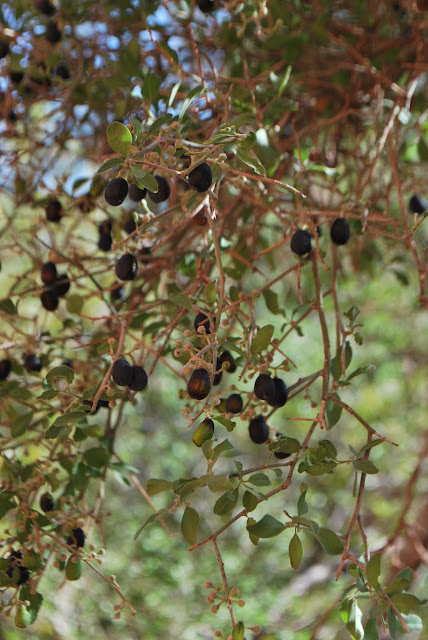 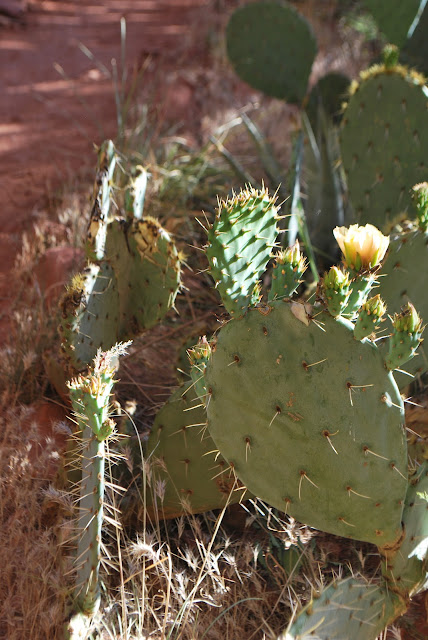 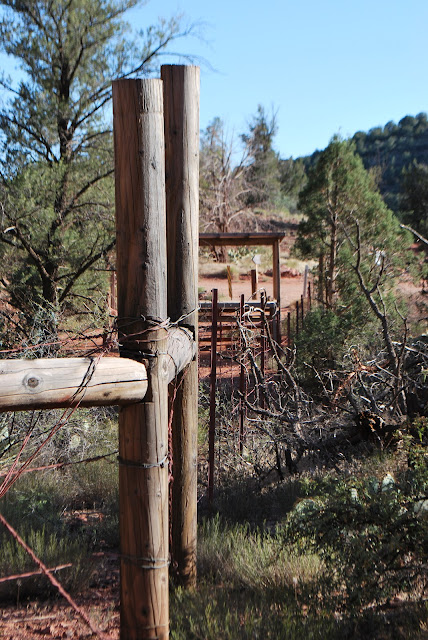 By the time we sat down for dinner at the Javelina Cantina restaurant, we accomplished a lot and I couldn’t believe our time was already up. Looking at myself in the bathroom mirror, it appeared that I took one too many trips to the tanning bed. But I wasn’t sunburnt - caked on layers of red dust camouflaged my white skin. An attempt was made to discretely return to my normal color with a quick wipe down in the sink before returning to my margarita and companion. The margarita tasted rewarding after a day in the hot sun. I felt like I got a glimpse into someone’s past life, even if it was a bit staged.

As we drove off into the sunset the sky darkened to an inky blue and the huge rock formations began to glow soft orange and pink. They stood proudly and alone out in the middle of the vast landscape. We made our way down the winding road in a peaceful silence as we took in their magnificence. For once I was glad that the speed limit was only 25 miles an hour so such a fleeting image could last a little longer. Was this the vortex experience we were searching for? We can’t be certain but if it wasn’t spiritual bliss then I don’t know what is.
Posted by Jamie at 11:02 AM